Steampunk and Victorian SF/horror has been on the rise lately:  I've reviewed Empire of the Dead, Chaos in Cairo/Carpathia, Strange Aeons, Rippers: The Horror Wars, and the weird wild west Deadlands.  Since IHMN has its own integral miniatures series, I am going to primarily contrast it with Empire of the Dead - the most "high profile" of the steampunk games which also has a miniature line from West Wind.

A slim book, with rather dated layout, iHMN is packed full of more content than larger, more polished hardback rivals
The Shiny
IHMN is put out by Osprey and is similar to the thin softcover "Men at Arms" series, at a slim 65 pages.  With colour pictures  and art throughout, it has good production values.  At only $11 it is cheaper than most pdf rulesets.  I do like pictures of miniatures in game and the rulebook is quite inspiring.

I did not like the internal layout and text style - it uses the rule 3.1, rule 3.2, rule 3.2b 1990s style rules format and a small font.  More subheadings, use of bold or coloured print and coloured captions for rules would have been good.  Considering the huge page margins a larger font could have been used. I found myself re-reading a page several times to find key information which is never a good sign. It did have a good table of contents and quick reference sheet so a tick there.  Considering the price, it is excellent value for money as it is very "complete."
Face Off: EotD is better laid out and is much easier to read and use, and as a large hardback is far more "shiny." However iHMN is simply much, much better value for money ($11 vs $45). You can buy a complete warband for the price difference in the rules. Winner: iHMN

The servants of Ra - definitely a nod to "The Mummy" - available from Northstar
Fluff
Unlike EotD, IHMN is notably free of the vampires or werewolves and seems less "gothic/occult" in tone.  It does have mad scientists, undead Prussian soldiers, yetis. magic rules and a warband to play the Mummy, but it seems aimed at more "VSF" than "horror." I suspect the omission of vampires et al has been done deliberately, but avoiding them completely seems silly - "Dracula" is a Victorian classic.
Faceoff: iHMN has far more options, but seems to deliberately handicap itself by avoiding legitimate "Victorian" monsters like vampires and werewolves. Tie.

The Stats
iHMN trims the "stat line" to 4 areas:
PLUCK - an interesting mix of guts and toughness, used to resist hits and take morale tests

MYSTICAL POWERS - i.e. magic & mad science - only a few factions and characters have this

Scotland Yard Company. While I think of it, here is iHMN's official blog link

Mechanics
Each model can move 6" + their speed bonus.  A running model can add 3" but forgoes any shooting. Generally pretty standard.

When shooting, the firer adds his "Shooting Value" + d10 + any weapon bonuses, and tries to beat the target's "Armour" rating.  If the target is hit is must make a "Pluck" roll or it is out of the game. There are modifiers if a firer moved or not, or if the target ran. Tracking this is a bit of a pain and using markers clutters the board a bit.  Rapid fire weapons and flamethrowers for example, can engage multiple targets.  Groups of models may "volley fire" - they can only inflict one hit but they can get a bonus to defeat a heavily armoured target or one in heavy cover.

Fighting works much the same way, except the target can use his Speed bonus against the attack. Players with a high Fight Value can split the bonus between multiple foes.  When you outnumber a foe you can choose to "Mob" him - similar to volley firing, there is a bonus against the armour, but only one hit can be scored.

Pluck rolls are used if a model takes a hit, or if faced with a morale test (fighting a terrifying foe, for example) - and the Pluck rating must be beaten on a d10.  Many weapons modify the Pluck rating - two-handed sword would be -2, for example. If the roll is under the Pluck rating, it is out of the game. If it is equal to the Pluck rating, it is Knocked Down, cannot act again, and suffers significant penalties. Medics can revive fallen models and help Knocked Down ones recover.
Face Off: iHMN takes "alternate activation" a step further. EoTD is stuck with IGOUGO and is basically GW's-LOTR-with-d10s. Keeping track of movement is a bit annoying in IHMN, though.  Winner: iHMN 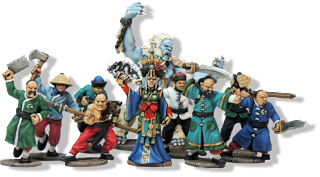 I thought the absence of werewolves and vampires was a deliberate avoidance of monsters/occult... until I saw the Black Dragon Tong's yeti...
Weapons & Gear
The "armour" of a model can range from none, to lined coats, brigandines, steel breastplates etc - or even repulsion fields or anti-electric suits.The armour rating is the score "target number"to beat when rolling  hits with shooting or melee.

iHMN has wide range of (41) weapons, ranging from bullwhips to sabres, revolvers to Nemo-style electric rifles, as well as weird science such as the revivivfiers and electric burst generators.  In addition, iHMN has vehicles such as walkers, rocket cycles, ape howdahs, ornithopters

iHMN has 25 special abilities or "Talents" characters can possess, and although less "occult" than EotD, it has more "magic" or "science" powers (18) ranging from "clouding mens' minds" to levitation and throwing fireballs - as well as having a system to create and point up your own special powers.
Face Off:  iHMN has double the weapon, equipment, and special ability options. That said,  EoTD's more prescriptive approach would make competitions more balanced and be less open to abuse than iHMN - but 40K-style min-maxers seem pretty rare in VSF.  The addition of vehicles tips the balance firmly to iHMN. Winner: iHMN 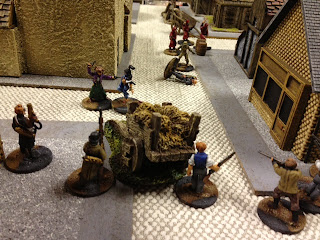 There the AAR's on"Matt's Gaming Page" has fantastic terrain.

Companies
iHMN has 6 distinct human factions, ranging from Scotland yard to a British rifle company, as well as the Tong, Mummies, cowboys, the USMC and  Foreign Legion, and anarchists. Again, the absence of Victorian horror staples such as vampires and werewolves is notable.


Where EotD has tables for casualties, advancement, recruitment etc iHMN simply uses VP's earned in scenarios as universal currency for buying new recruits or "leveling up" others.   They both work in similar fashion.

Face Off: iHMN has far more variety than EoTD, which only has only werewolf, vampire, inquisitor, and 4 almost identical human factions.  Most importantly, iHMN allows you to create and stat-up individual random models while EotD only fits to a template. Winner: iHMN 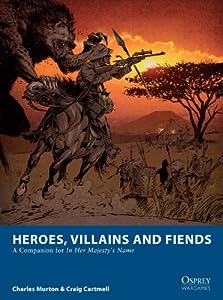 There seems to be a sequel in the works which includes Vatican monster hunters, darkest African, Russian spies and Asian secret societies. Sounds good - and if it's also $11, a no-brainer purchase...

Scenarios
There are standard scenarios: Retrieve a a VIP, "breakthrough" to the opposite end of the board, assasinate enemy leader, discover secret documents/relics, hold the fort, escape, king of the hill, catch the pigeon, and destroy the escaped mutant.  These can have "complications" added such as fog, minefields, night falling, local police arresting, earthquakes, etc.  There also is a wide range of locations ranging from London back alleys to the Orient Express.
Faceoff: iHMN offers more options, but EotD lays out their 5 basic scenarios more clearly.  Tie.

TL:DR - The Matchup
Despite being a much smaller, cheaper production, iHMN edges its more polished rival, by having an more involved turn sequence offering more involvement than vs a rather staid IGOUGO.  EotD is pretty much a d10 version of GW's LOTR or "Legends of the Old West" which is a plus or minus depending on how you look at it.  Further, the wider range of warbands and equipment (and the ability to "stat up" random models from scratch) means iHMN offers more flexibility.

Recommended? Yes.  A more flexible, involving game than it's major rival, iHMN is a steal at $11.
It's my "new best" VSF skirmish ruleset.
Posted by evilleMonkeigh at 16:35