Sometimes rules are just plain inaccessible and unappealing. What makes a rulebook easy to use?

Here are a few things I look for when I review a rulebook:


When I work with a student, I don't just tell them once and expect them to instantly assimilate it - I repeat the message (preferably in a few different ways).  A form of repetition which has additional benefits is:

Quick references and chapter summaries. I always looks for a "quick reference" page at the back of the rulebook.  I don't like having to look up a web page or yahoo group to print it off.  (Remember the good old days when the quick reference was a cardboard tear-out?)

A great idea, but something too few authors do, is a rules summary at the end of each chapter.  A simple dot-point summary of key rules from the chapter make a great resource, and you can then go through the rules in more depth if it does not answer your question.  Basically, you consult - 1. Quick reference sheet -> 2. Chapter summary -> 3. Main text.   I've seen a few rules do this and it's a great idea.

Not only is it easy to find rules, but when you are reading a book for the first time, it reinforces the key points.

Rules can belong in more than one place. Another thing is rules might need to be mentioned more than once, in more than one part of the book.  For example, if a troop must take a morale test for being suppressed by shooting, I'd expect to find this rule in the Shooting chapter as well as the Morale chapter.   That way I don't have to go looking for the Morale rules - it's all in one place.   This is another example of good repetition.  Damage resolution rules could be included in both Shooting and Melee chapters.

This also means if the author has a different idea of where to place rules, we can still "find" the rules. For example, terrain info (including movement penalties and cover modifiers) were found in the front of a rulebook I read recently, along with the explanation of stats and unit characteristics. Movement penalties and cover modifiers are usually found in the Movement and Shooting sections of the rules.   Repeating the rules there would have been helpful as well as reinforcing the information to the reader.

MANAGING INFORMATION OVERLOAD
Advanced Rules.  It's important not to "overload" the player with too much info. In the days of PDFs, it's often attractive to keep additional information back and either release it as a free or paid supplement.  However this can lead to accusations of "incomplete" rules or price gouging, EA Games DLC-style.

I also like to know which rules are "fun" additions or "chrome" and which are important to enjoying the game and playing it the way the author intended.  Because many advanced rules are actually viewed by the author as essential for a 'good' game.  I'd like them labelled as such = i.e. "strongly recommended."

The layout of a book can also lead to information overload.  Dense text, uninterrupted by illustrations or pictures, especially when in small font, can lead to a feeling of being "overwhelmed" with information.
"FLUFF" INTERFERENCE
I've mentioned this in another post, but many rule designers forget their #1 job is to provide a clear and fun set of rules - not exercise their (usually dubious) literacy talents writing fanfics for their universe (aka fluff).

Fluff is well and good in its place.  However its place is not anywhere that will obstruct the easy reading/location of rules.  I particularly dislike the practice of embedding 3-4 pages of fluff at the start of each rules chapter.  Malifaux was a poster child for this.

Even putting the fluff all in one spot can be problematic if it is excessive.  Infinity has great artwork and interesting fluff, but fluff took up 90% of the v2 rulebook.  The actual rules themselves were jammed in the back of the book, as a kind of "appendix." 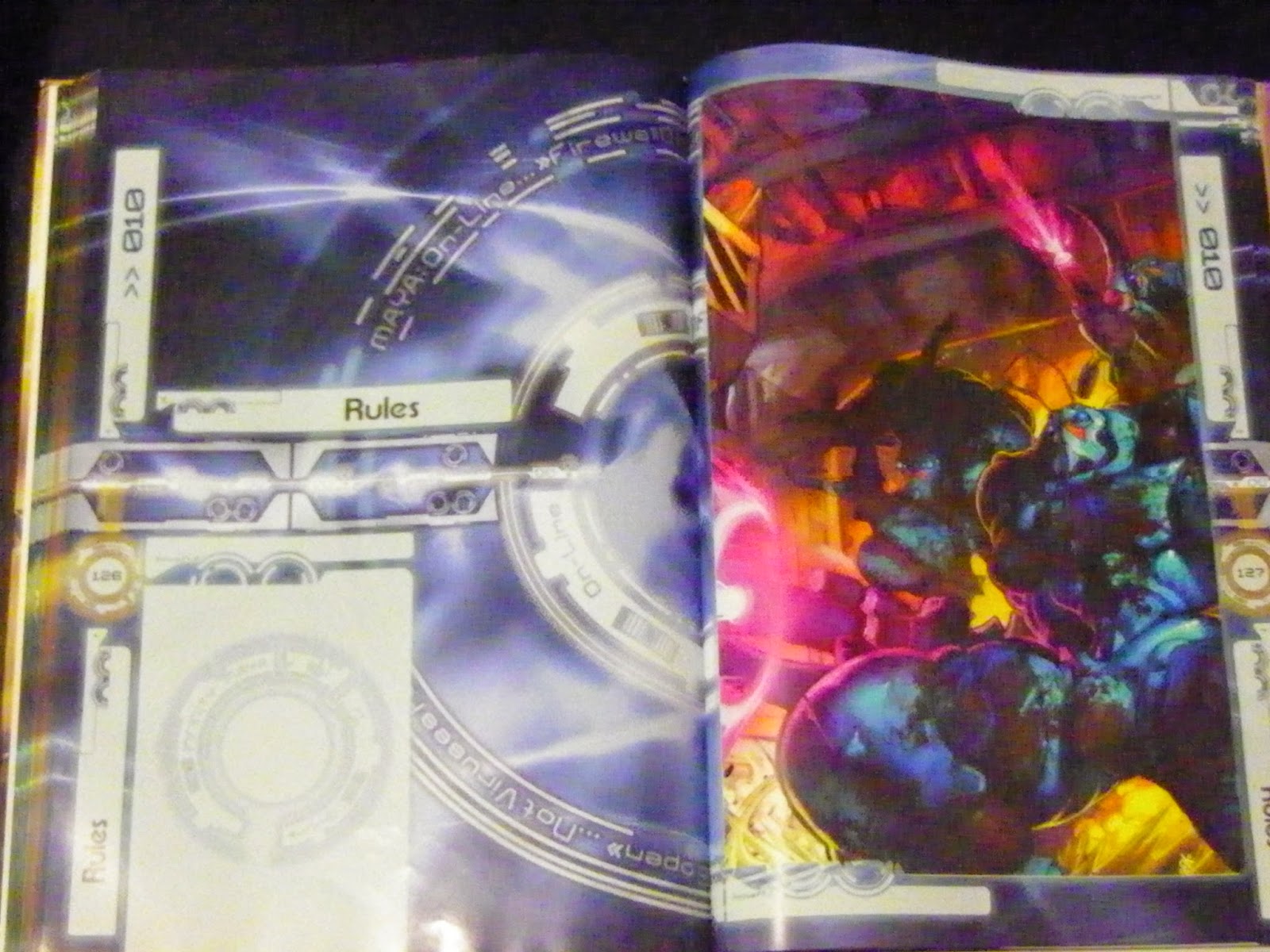 Please sir, can I play the game?  The actual rules for Infinity appear after 128 pages of fluff....

LAYOUT
This is a pretty broad category. I'll go for the low-hanging fruit first.

Font Size/Columns, and the "wall of text."  I'd say size 11/12 is minimum - not everyone has 20/20 vision.  Weird fonts are OK for small chunks or boxes with "flavour text" but the main text font should be simple and familiar .

Text should be "broken up" - if you aren't using diagrams to explain your rules (and you should) then at least toss in some eye candy to save others from eyestrain.  (As an aside, painted minis in tabletop battle are preferable to home made drawings)

Whilst not a "must-have,"the two column-per-page is popular for a reason - it provides a good blend of readability and "fits" plenty of stuff per page.

Page Colour/Watermarks.  You know that cool dark blue background with that awesome space marine wielding a chainsword, that is the background for each page? It means I can barely read your rules.  This is common in indie rules and pdfs, where enthusiasm can outweigh practicality.  However, even popular rulebooks can make themselves harder to read (Tomorrow's War, I'm looking at you.)

Page Margins. Some rules colour-code the margin of each chapter.  The aim is to make it easy to leaf to the correct section.  That's well and good, but please also include the name of the rules chapter in the margin, as I own lots of rules and green-edge chapter might mean Morale in one book and Artillery rules in the next.

Table of Contents/Index. You'd think this goes without saying, but it's surprising how many rules neglect this.  I couldn't count how often I've had to refer to an index to find an obscure rule - especially rules authors don't always put rules in a location that is logical to the rest of us.

Spelin and granmar.  This seems obvious but I'm amazed by how many "professional" glossy rules look like they've been only given a cursory proof-read.  People often do not "see" their own mistakes as their brain fills in the correct word/spelling.  I'd suggest family members and wargaming mates might not always make the best proofreaders either, unless they do something like that for a living (solicitors, clerks, teachers etc tend to be good "critical" readers.)

Don't be afeared of charts.  Charts are a bit of a dirty word in wargaming, as they tend to be associated with convoluted, gluggy rules (a la WRG 80s).  However they are a valid way to present information - and I think designers, by eschewing charts, are narrowing down their options for both presentation of information and also using different game mechanics.

Not even bothering (aka MS Word approach).  If you're sending me playtest rules, fine.  If you're selling me a rulebook, I expect some effort to be made.  If it looks like my mum can make it on 5 minutes on MS Word, I'm seriously questioning why I just sent you $10.  Make an attempt to be professional, please. 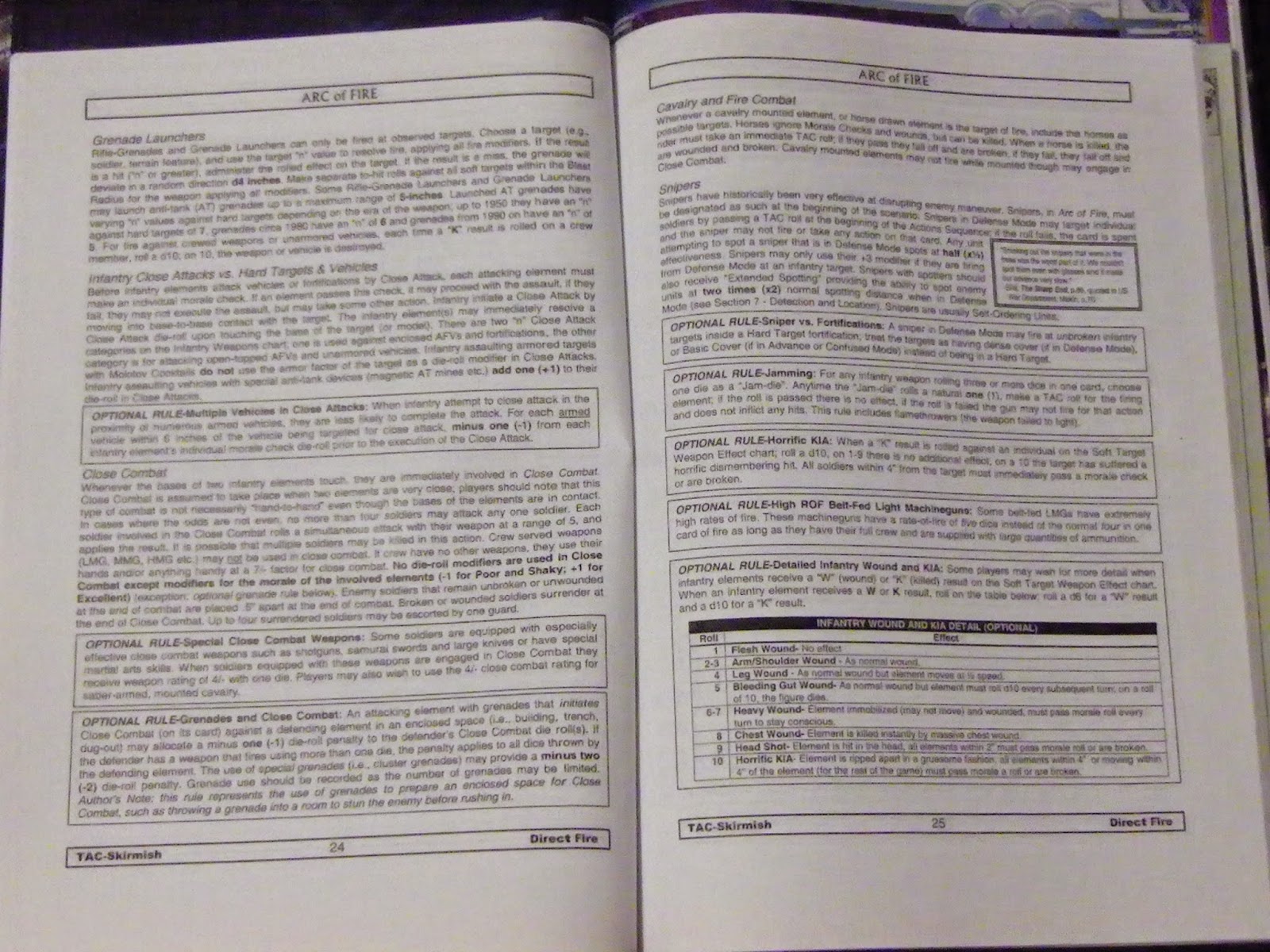 Classic wall of text. I've tried to read, try and review Arc of Fire (WW2 platoon game) three times. I usually get a mild headache by page 12 or so and give up.

ILLUSTRATIONS & DIAGRAMS
Not everyone "grasps" things through reading. Sometimes a picture is worth 1000 words.  A diagram (with arrows, and annotations) is often even better.  A comic strip (or photo montage) showing the sequence of play is great, and about as good as it gets short of video.

The future is video.  I predict in future rulebooks will have those barcodes you scan, that will then play a gameplay example or sequence of play on your smartphone.  (It can't be that complex, as I'm pretty sure I saw some Year 6s do it using iPad apps the other day) Until then, we have diagrams.

Diagrams and illustrations are particularly useful when you are introducing unusual mechanics.  "Common" mechanics like true line of sight may require less explanation than your new activation resource-management mechanic.  That said, I still think even simple mechanics are worth a photo or diagram.

When school kids read me their stories, what they read aloud and what's "in their head" often differs dramatically from what they wrote.  Just because it makes sense to you (and your circle of gaming buddies who were there all throughout your design process) doesn't mean everyone who picks up your rules will instantly "get" your intent or be able to "fill in the blanks."*

Some people learn best through pictures - which are often your best way to "show" things short of video/being there.   I'd go so far if there isn't at least 2 diagrams per page, you're doing it wrong. 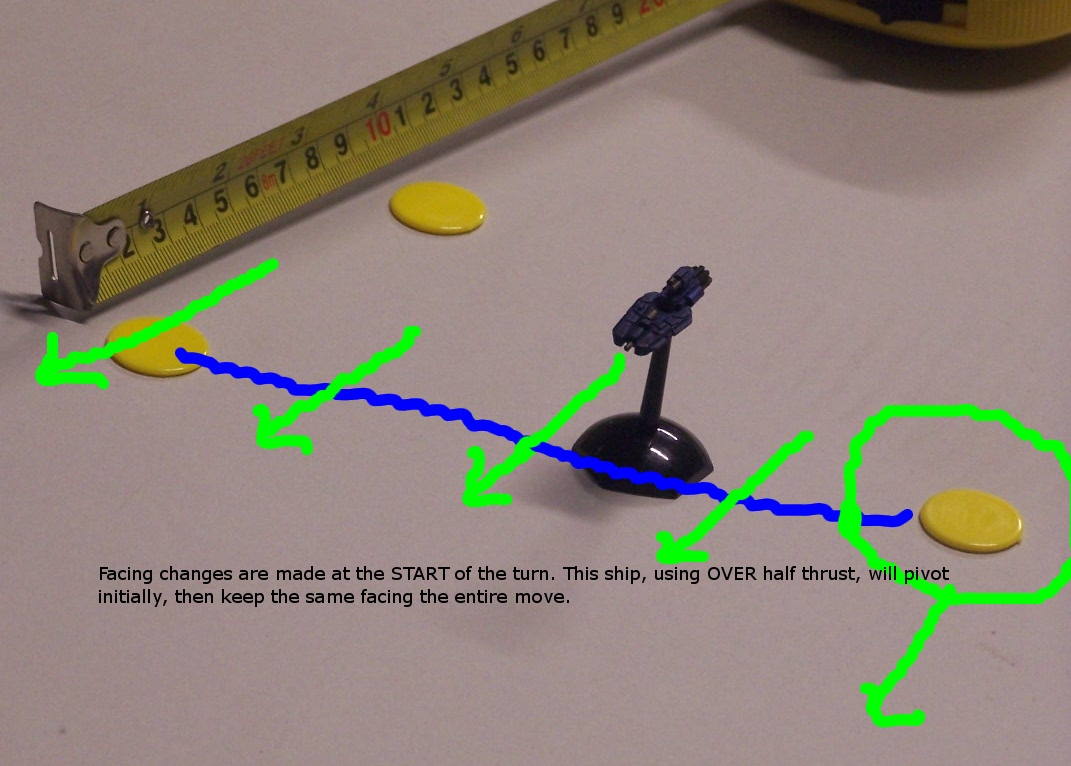 Diagrams don't have to complex, and they can be invaluable in explaining unusual concepts. Here I try to make some Newtonian space ship rules.

CLARITY or "Is this what it means?
*This wasn't part of my original outline, but may be worth further elaboration.  I'd like to see rule designers give their rules 'cold' to a bunch of strangers, then watch and listen to them play the game live without commenting or interfering in any way.  Like an exhibition game at a show - but without any guidance!  See how players naturally play the game based on their reading of it.  See what issues/arguments crop up.  Then repeat the same experiment with other groups.    I don't know where you'd find strangers willing to videotape themselves, but it's good in theory!  Game devs get the same effect through forums, emails, websites etc and they can do FAQs, but they are usually done AFTER the game goes live.  Long distance play testing with email feedback can only do so much (especially if it isn't 'foucssed'), and play testing with your friends often means you are working with a friendly crowd who "know" you and your approach, even if they didn't help you make the rules from alpha. For example, I suspect 2HW grew from energetic live demo-ing, as I always used to get a real "private house rules" vibe when I read them (though they have improved a lot since the early days.)  Quite a lot of British club-developed rules have the same "feel" to them - i.e. designed by a bunch of friends who understood how the rules worked without having to actually learn the game from the rulebook.
EXAMPLES
It's a good idea to provide examples of the finished product before issuing people a task. Having an idea of what the final product looks like (or action, if it's sport) not only shows them how it works, but also gives them context for understanding how and why the rules work.

This can be written examples, but are even better when supported with illustrations, diagrams or sequences of pictures.

I'd expect examples to be scattered through each chapter, and not just one big "example of gameplay" hidden back with the appendixes.

TL:DR
Most of the layout stuff is (or should be) obvious, so I'm going to summarise the key points:

Explain the rule, show the rule (illustration), then give an example.  Then, summarise the rule, and repeat it whenever it is logical to do so.
Posted by evilleMonkeigh at 00:57