I know that there are lots of "underworld" myths.  Thanks to wikipedia (ironically, the most reliable entry on this topic I could google): (I'm not too worried about scholarly research, given the topic!)

We have plenty of mythic references (Sheol, Hell, Svartalfaheimr,the Greek Underworld, the Irish Cruachan, cavnerns leading to Purgatory or Tuatha de Daan).  There are German caves that lead to an "inner earth."  As far apart as the Pacific Islands, Brazil, America, the Caribbean and India there are legends of the first peoples emerging from a subterranean land.   So there's quite a bit of background and mythic "support" for it as a place.

In my RPG rummaging I could only find one Hollow-earth centric game, which merely played on all the stereotypes (which you could do with any other pulp-centric ruleset a la Savage Worlds).

The "science" of hollow Earth dates to Edmund Halley (the comet guy) who used it to explain geomagnetic fluctuations; it continued in various forms and in fact Antarctic expeditions resulted from the agitations of hollow-Earth proponents.  Hollow Earth has some support from the UFO crowd.  You know, Atlanteans/Nazis/Greys/etc - who also favour the Poles for their bases.

In 1788 Casanova (yes, the Casanova) wrote of a hollow earth populated by hermaphrodite dwarves.  Probably the most popular versions were Verne's Journey to the Centre of the Earth and Edgar Rice Burroughs "Pellucidar" series (psychic flying pterosaurs and ape men ftw.)

Whilst pulp is good, I feel Hollow Earth has been pigeonholed in the pulp era.


The awesomely zany Aussie series "Danger 5"  - Basically, Weird War II as seen through the eyes of a cheesy 60s B-movie.  In the latest episode, the team fought Mengele's mind-controlled Nazi dinosaurs in Antarctica with the help of jazz-loving chimps...

There isn't much "serious" Hollow Earth stuff out there (okay, it sounds a little ironic when I whinge about it out loud). The reason I'm commenting on this is a book I found really interesting - The Descent by Jeff Long.  It describes the discovery of a massive cave network beneath the earth surface, The story starts brilliantly -  Nepalese trekkers discovering a cryptic, mummified corpse, being lured into a cave to be hunted and slaughtered.  Then a military team investigating mass graves in Bosnia encounters something disturbing the graves - a military chopper crashes. Only the pilot survives, raving about "demons."  The worlds militaries start to explore this underworld, which may be inhabited by early hominids.  Whilst it fades after an excellent start, the book keeps a pseudo-scientific feel and its hard, gritty tone is at odds with the usual slightly silly/pulpy feel of most Hollow Earth literature. 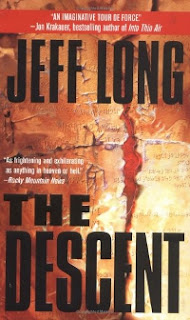 The Descent (no relation to the movie) is a gritty, darker take on the "underworld" genre

Other books - notably "Ice Station" by Matthew Reilly, explored the idea of mysterious things buried under the ice, but this was incidental to the main story.   There was a bit more pulpy subterranean hijinks in Beneath the Dark Ice by Greg Beck (notable for its ridiculously superpowered protagonist and laboured text) which had a tentacled blob creature (aka The Thing?) that can mimic humans and hunts in a sunken Atlantean city beneath Antarctica ice - with caves systems that presumably stretch across the globe including to the Lost Colony in Roanoke.  However this book is just a cheap Thing ripoff and the underground world was just a series of "dungeons" for the heroes to be chased through - not a hollow Earth per se. 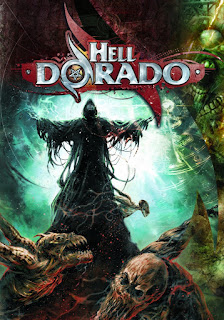 The wargame Helldorado has conquistadors (along with Arabs, Chinese etc) exploring Hell. However its theological bent perhaps puts it beyond the "Hollow Earth" genre.


My argument:
The "underworld" or  "hollow earth" with subterranean civilization and races is under-used, and pigeonholed into cheesy VSF/pulp settings in the pre-War years.  It's a genre that could (and should!) be explored more thoroughly.