Note: This half of the review was written before the birth of my second child, when I was getting ready to get back into Infinity. This ambition has been temporarily shelved, but I thought I would release Part #1 as it's been sitting in "Drafts" for so long it has cobwebs on it....  I decided to release it "warts and all" in a less polished state as I can't see myself having the time to get deeply into Infinity in the near future...

This is a big review, so I'm going to break this into a few pieces.  I'm not going to go into the nitty-gritty of rules changes from version 2 (there's far more informed people on the official forums for that) but rather general observations for someone who might be interested in "getting into" the system for the first time, and I've simplified the general concepts as best I can. 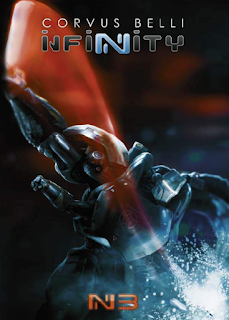 Simply the most gorgeous rulebook I own. Comes in a two-pack case with the fluff book.
Twins, Basil!
The Shiny
It's very shiny.  My new favourite rulebook.  They have divided into two books - the rulebook and a "core book" with fluff and faction info.  This is a great idea - I often complain rules are "weighed down"with fluff, and now the key rules and fluff have been separated.  It has amazing production values and both 250-page softback books fit into a neat hardbacked case.  If you are a rulebook junkie get this - it's pure wargaming p0rn. In any case, the complete rules are free as a pdf.

A lot of effort has gone into the layout and explanations.  The original Infinity rules were beautiful, but mistranslated in a kind of "Spanglish" and were so inaccessible I actually made my own rulebook from the quick start rules and stuff I copied and pasted from their wiki pages. The N3 rules are light years ahead - in fact making the rules more accessible was the primary reason for the new edition. 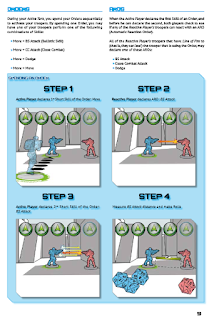 A lot of effort has gone into organizing the rules and making them more accessible... 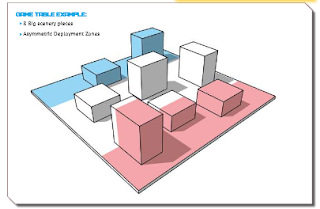 They even explain how (and why) to lay out a table -a big thumbs up!

It has a good index (I referred to it a few times and always found what I was looking for) and the rules are sequenced sensibly with colour-coded pages.  You can see they are trying to gradually introduce the player to gradually more complex concepts, i.e.
Quick start rules -> Basic rules -> Combat -> Skills -> Weapons -> Advanced Rules.

However, you can't hide there are a lot of rules. When most wargames rules I play have ~30 pages of rules, Infinity's N3 combines the old V1 rulebook and the Human Sphere expansion, and you get 250 pages of stuff to learn. By the numbers:

That's a very hefty time investment to get "into" the game. It's not a hefty financial investment though - although you could pay $80+ for the dual rulebook set it's completely free via pdf.  I would have liked to see the core rules/fluff book available for purchase separately though. The fact the rules are also downloadable for free means this is a minor quibble. 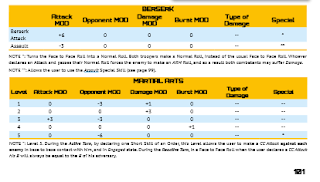 No matter how well explained... 250 pages of rules is 250 page of rules... I mean, there's 5 levels of the martial arts special skill...  This is all rules, no fluff (which has its own separate book) i.e. about 8x more rules than the average rulebook.

In addition, most models have several (3+) special rules, and most are limited in their availability (i.e. you can only field x amount of units in your army).  Each unit also has a points value and special weapons have a SWC (support weapon cost) which stops you loading up on bazookas, HMGs and sniper rifles etc to an unrealistic degree. 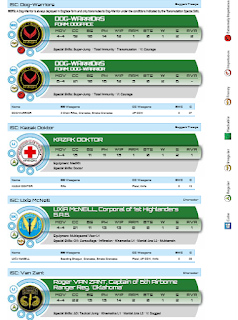 You can choose from free unit builders such as Aleph Toolbox which calculate your army creation for you. Then press print and voila! (Yes, you can have Scottish werewolves, Cossacks and SAS in the one faction...)
Activation
Infinity is one of my favourite games to play as it is chock full of decision points - vital decisions.  Although submerged under an increasing mass of special rules, the core concept is very clever.  I'm going to give you the simple version:

*You get an activation counter for each miniature to create an "order pool"
*You can spend a counter to get 2 actions (or one "long action") with any miniature in your force
*You can activate the same miniature more than once... so if you have 8 minis (and thus 8 counters) you could activate the same mini 8 x in a row...  ...or two minis 4 x each... ..or each mini once... ...or any combination and order you desire.   So there is a massive amount of decisions as to who to move, when, and how often...

Wait - this sounds crazy! Couldn't  one guy use all those moves to just charge all the way to the enemy base line, slaughtering everyone on the way?  Sure.  Well, he could try.....

*Every model in line of sight of the active model can react; every time it activates.  So your lone Rambo could trigger gunfire from every model on the enemy team... ...every time it acts. In fact, vital decisions and actions occur when it is not even your turn.  As it says on the box "it's always your turn."
*Gunfire is very lethal.  Cover (and the modifiers it provides) is very important.  Minis tend to pick their way from cover to cover very realistically.  In fact it's recommended there be no long fire lanes/or even gaps in cover further than 4" apart.

I haven't come across a wargame with such a Chess-like feel.  Players go to pick up a mini, then hesitate, change their mind and decide to move another - the decisions are vital and gripping.  A wrong choice is lethal, and there are so many choices to make.  Who to move? Where to?  Who has line of sight to whom?  Where to position your model so it covers the best fire lanes for when it is the opponent's turn?  How to get the best modifiers to force advantageous opposed rolls? There are so many choices - you really feel like you, the player, make a big impact on the game.

The game uses "line of sight" - v3 rules introduces silhouette templates so it isn't exactly "true line of sight" (which makes sense as most Infinity models are very dynamically posed). In general, if you can see a model, it can see you right back.

Throw in a plethora of special abilities like therm-optic camo (Predator cloak), infiltrators and paratroops which add a further layer of decisions.  Sometimes fire teams can activate multiple models together.

In short, it's one of the most interesting and clever activation mechanics I've played, being simultaneously cinematic and requiring fire-and-move tactics that suit any modern (WW2+) era. 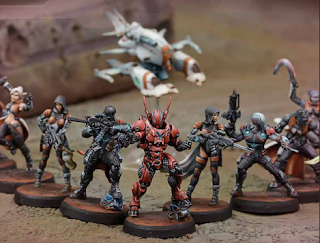 The models are beautifully sculpted, but I find their fine detail intimidating to paint....

Mechanics
These are not initially the most intuitive - it uses a RPG-like d20; models roll under a target number; with a critical occurring if the exact number is rolled.   Most rolls are opposed rolls (e.g. active player shoots, reactive player(s) shoot back. In that case, the highest roll under the TN wins, i.e. a BS (shooting skill) 14 trooper exchanges fire with a BS 11 trooper.  The BS 14 guy fires 3 shots and gets a 4,7 and a 16 (miss); the BS 11 guy gets a 9.  As the 9 is the highest number which is also under the TN, the second guy gets a hit.  If the BS 14 guy rolled a 12, 13 or 14 the BS 11 guy, being a poorer shot, could not beat him, except with a critical hit.

The damage roll works by the shooting player rolling under the Damage rating of his gun - say 12 on a d20 for an assault rifle.  This roll is modified by body armour (say +2) and any cover.

Troopers who roll under this modified damage score die, unless they are a multi wound hero or heavy power armour trooper.  Troops passing the roll must roll against their Will - if they fail they are forced to duck back into cover, thus losing LoS to the target - 'suppression' if you will.

The mechanics are initially a bit jarring, but the actually makes sense after you play it  - I've actually switched to a similar system on my homebrew pulp rules as it works quite quickly in practice.

.....This is where I got up to in the review, and again note I have simplified my explanations on activation and mechanics (with so many rules, there are a lot of extra factors to consider I haven't mentioned). I strongly recommend (even if you aren't interested in the sci fi genre of the game itself) that you download and read the quick-play rules - it's interesting from a game-design perspective and the quick-play rules remove Infinity's biggest weakness - the plethora of special rules, abilities, equipment - leaving only the good core gameplay which can be easily adapted for modern/pulp/WW2/sci fi with little effort.  There is a Youtube channel where they explain the mechanics as well, as a helpful wiki and forums - Corvus Belli have cultivated excellent customer relations.  Their minis are expensive, sure, but they have lots of goodwill and seem to have none of the vitriol directed at other successful companies.

TL;DR The plethora of special rules makes the learning curve almost vertical, but Infinity is a great game buried beneath them, with some of the most involving and gripping decision making you'll have in a wargame.

My recommendation: Download the free rules and try them with random models sans the special rules, before you dismiss them as "too complex" or "I don't like anime."  You might just find your new modern/sci fi rule set, for free.