EDIT: (a) For those who simply read the title, then comment, this post is not saying tank games do not exist, but there is areas to explore within the genre (i.e. smaller skirmishes, non-Microarmour/ battalion scale). (b) Also, if you have linked here from TMP please tell Tango to bugger off and not link my blog again, ever

We have shedloads of WW2 rules, and quite a few modern sets.  But there isn't many that specifically focus on armoured warfare.  Yes, we have tanks in those WW2 games (Bolt Action, FoW etc) but they are part of a whole.  I'd like a game specifically focussed on tanks, with infantry merely playing a supporting role.  Think Warmachine; solos and casters are detailed, whilst "grunts" are generic groups.   Given that there are so many miniatures around, and everyone loves tanks (if you don't, your man-cave privileges are permanently revoked). So why don't we have more games that focus on them?  (No, weird/expensive boardgames or stuff from the 70s doesn't count)

Tanks (and crews) are the "heroes" or "aces"
Tanks should have detail, infantry do not. Tank weapons and capabilities are quite detailed, but infantry is streamlined, simplified and generic.  Specific tank crews can "level up" perhaps with a limited range of "special abilities."  Infantry are merely rookies, experienced or veteran which applies to all infantry on a side.  So some sort of (simplified) Mordheim-esque campaign system is required.

Squadron/platoon level
There are plenty of combined arms games (like FFTW3) at a large scale (brigades, battalions).  In order to keep our game focussed on specific crews, it will need to be a manageable size.  It will use between a troop (3-5 tanks) and a squadron (~12 tanks) with between a platoon (~3 squads) and a company (~9 squads) of infantry.  Artillery is unlikely to appear at this level.  So we're sort of looking at the FoW-Bolt Action scale from a tank-centric focus.  Whilst sweeping Cold War battles involving complete divisions (and usually abstract rules where a single tank = a platoon) are beloved of gamers, a lot of tank battles in WW2 involved a dozen or less per side, not hundreds. 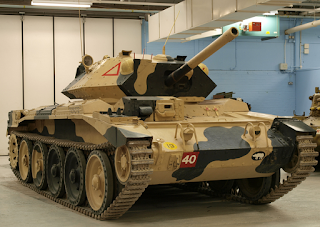 The Crusader is possibly my favourite tank.  Back when tanks were in a transitional period, and designs were innovative and weird, rather than the boring copy-paste MBTs we have today.

Realistic tactics = focus
In order to win, you need to use realistic tactics. I'm not a tank expert but I presume "bounding overwatch" where some tanks fire while allies move up/flank will be heavily used, as will setting up ambushes and taking hulldown positions.

For example, a troop activation might be "bounding overwatch" 2 tanks fire and 2 move.

I also want tanks to feel and move like tanks.  In some games they simply feel like infantry and kinda freely move anywhere and face and fire any direction.  Perhaps give them a turning radius if they move over 1-2" per turn.  Maybe limit the amount of degrees they pivot in a move?   I'll need to know exact stats - from memory a Panther could pivot 360 in 30-40 seconds; but how would Russian mud etc effect this?   this could simply translate into I.e. light tanks can spin 270, mediums 180, and heavies only 90, halved in bad going....

Gun traverse may also a thing; early Panther tanks took a full minute(!) to turn 360.  While I'm not going to track turret facing in-game, it might effect "reaction" times to targets off to the side, for example, or the ability to engage multiple targets.

I'm happy to have a somewhat fluid/flexible time/ground scale as long as it mimics the correct tactics and feel.  For example, I presume the "practical" RoF of many guns would be around 15 rpm no matter what the actual RoF is - they need time to aim.

Activation & Reaction
Reactions seem sensible as tanks might peek out over a rise or round a building then compete to get a shot off first. I'm not sure the level of co-ordination between tanks - perhaps activate by troop if equipped with radio, with units having to pass some sort of test without.

No IGOUGO of course; I'd like the initiative to swing back and forth; perhaps as tanks take hits and fail morale/skill tests, the "active" player would then become the "reactive" player.

Simple damage
I'm thinking a few levels, that could be denoted by a marker.  There's no hitpoints, just general effects.

Shaken = crew is freaking out, from non-pen hit. Perhaps it's being scoured by 20mm fire or a deflected shot or something.  Maybe temporary -1 to rolls, perhaps tank cannot advance in the direction of the fire.

Damaged = this is where the detail comes in, but keep it simple (maybe so can mark with micro d6)
1-2. Bail out! = crew jump out beside tank; may test to get back in later
3. Crew injuries = -1 to all rolls for rest of game as crew are impaired or have to multi-task/take over from wounded comrades
4-5. Mobility damage = perhaps a radiator is hit or tracks damaged; tank can must pass a test or remain stationary that turn; if is passes it may move at half speed for rest of game; if it fails a 2nd test it is permanently immobilized (and -1 to fire if hydraulic turret)
6. Weapon damage = turret ring jammed or similar; gun cannot be used until a crew test is passed

Killed = this takes a few forms.
1-2.  Brew up! = tank explodes in spectacular fashion; it's a total write-off
3-4. Crew kill = everyone inside is dead; tank quite salvagable
5. Mobility Kill = tank immobilized for rest of game
6. Weapon kill = gun knocked out or turret jammed; may not use primary weapon for rest of game

The Grant is similarly weird and awesome. The whole design just makes me smile.

Infantry Damage and Rally Points
Infantry damage would be simple as possible; shaken, pinned, or destroyed.
In many games infantry squads once "destroyed" are gone for good, I'd like to see them have a chance to 'respawn' at a rally point (roll based on their morale) within a certain range; representing scattered survivors re-forming and re-organising.  Rally points (or "jump off") points could be set like in Chain of Command and thus could be valuable tactical targets - i..e once rally point is overrun, you cannot respawn there.   I'd also like to look at "cohesion" ranges - most games have squads 2" apart - which be 20-30 yards in 1:300?  I'll have to look it up but I presume real life squads would be able to operate more independently than that.

Spotting
Whilst I don't want to head into 90s territory with super-detailed spotting charts, I do think this should play apart in the game as many tank fights started with an ambush.  Perhaps tanks (or tank troops moving together) could be a "blip" until spotted (quite a few WW2 accounts say tanks were heard long before they came into sight)

They could be divided into generic small (light/turretless TD), medium (T-34) and large (Tiger, Sherman) and have a set range at which they are revealed (halved if they are behind cover, doubled if they fire).

Setting
I'm thinking anything before good gun stabilisation, ATGW and helos as I feel tank warfare changes significantly. While tanks are still the best anti-tank weapon, we don't want those infantry peasants ruining things with Saggers or Apaches/A-10s interdicting a tank column before the fight happens.

So I'm thinking WW2-late 1960s for the technology.

As I don't want to get bogged down with official orders of battle, I'm probably going to have battles in an "ImagiNation" between mercenary tank units where I can freely mix what-if 1946 wonder tanks in with early stuff that simply looks cool (Crusader, Lee), or use an S-Tank in my 1960s battles alongside more usual T-55s and Centurions.

EDIT: TL; DR
There is room for a 1:1 tank game that is not big battalion micro armour/Cold War.  The tank genre tends to focus on big battles rather than engagements of half a dozen tanks per side; and if it is in a ruleset such as FoW, the tank rules themselves tend to be lacking or merely part of a whole; rather than the "tank crews as stars/aces" of a game like Battletech; where mecha crew are the focus.
(a) individual crew skills which can level up like Mordhiem or Battletech
(b) campaign/experience system
(c) dynamic reactions/interactions and initiative not just IGOUGO + overwatch.
(d) more realistic movement system than microarmour rulesets
(e) minimal infantry/confine to pre-ATGW era
(f) simpler spotting than older microarmour rulesets
(g) damage system which has some detail (crew, weapon, mobility damage or kill) but can still be denoted by tokens

Think tanks-meets-Mordhiem - or Heavy Gear/Battletech with WW2 tanks instead of mecha.  This could be done by adding depth to existing micro-armour sets like FFTW3.  Finally, I have excluded ancient (read 1970s, early 80s) games and obscure/expensive boardgames.