I'm a bit embarrassed by the paucity of articles in this blog of late; but my shed hobby time tends to devolve into a "make cubbies and chase toddlers"  time.

Accordingly, I thought I might show a half-finished project.  I think I managed to base and undercoat them in 4 hours....
-15min to actually base and undercoat
-2 hours 45min to distract my littlies away from my painting bench
-1hr to clean up the mess they made while playing 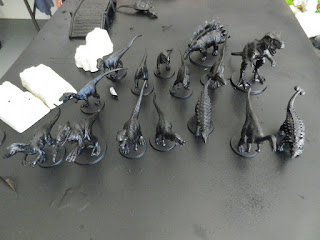 These are plastic kids toys - they work out at @50c each.

Anyway, this follows on from an article on dinosaurs a while back. I haven't got any cavemen yet, but I do have a lot of dinos.  Total cost - a $10 bag from the "dime" shop. (Which also came with a lot of trees and terrain which will also work for wargaming purposes.)

Some of the sculpts were horrific but most were rather good - the Stegosaurus in particular has detail comparable to resin kits I've seen.  Even in black undercoat, you can see the potential.  The default, hideously garish kiddy paint schemes tend to fool you as to the quality of the sculpt. 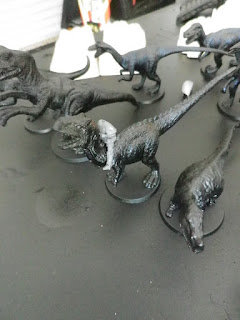 My dinos were hard plastic - remember if soft plastic the solvent in spraypaint can melt them/make them "tacky" so hold the spraycan well back unless you are sure what sort of plastic they are made of.
(He says from bitter experience, having ruined a wonderful dragon toy that would have served his LOTR armies well...)

I'm also looking at some miniguns from Tau battlesuits, wondering how raptors with miniguns would go.....  ....or maybe a Stargate-style expedition into the Jurassic by my lovely Empress moderns (why should the 1930s explorers get all the fun?).

However, my current project is knights-with-psychic-powers atop dinosaurs, using my homebrew Middleheim rules (which have morphed from their Warmachine+Bolt Action roots into quasi SoBH+Infinity mashup).  I like the idea of psychic powers for medieval.  It makes a more tightly confined, structured, gritty magic system and seems more fresh than conventional swords-and-sorcery magic while filling the same role. 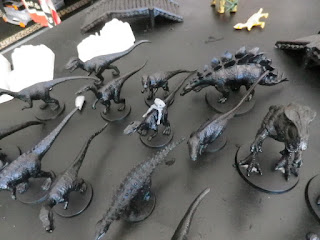 Even the toy terrain from the bag is useable - the wooden bridges in the background will work well with almost any era (I'm thinking they'll particularly match my French-Indian war Zvezda log cabins)....

Anyway, this is more a "I'm still alive the blog is not dead" post, as well as a reminder that we don't always need to buy "approved" resin or metal minis. Toy shops, junk shops and hardware stores are great resources.
Top tips:
#1. look beyond the paintjob
#2. if you can't easily eyeball it, carry a mini with you as a scale reference (I have a 15mm and 28mm mini in my car glovebox - a good use for broken minis or those with missing limbs)
Posted by evilleMonkeigh at 19:29