Tyranids and Lost Ones; more speedpainting

Another quick and cheerful bunch of minis to inspire the less-perfectionist amongst us.  I deliberately used even LESS colours than usual; mostly craft paint actually.  I'm kinda enjoying the "minimalist" challenge and I feel I'm getting solid result for minimal time investment. 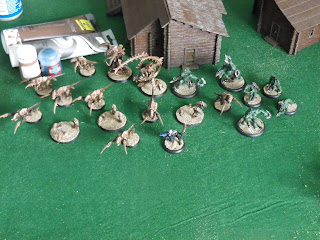 I had an hour; I managed to paint and base 19 miniatures in that time.  The Tyrannids with their brown scheme were particularly easy and was pretty much brown craft paint, tinted appropriately 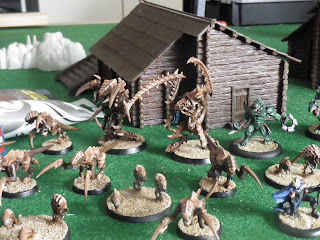 I wanted my Tyrannids to be more "insectlike" hence the rather dry brown paint scheme.  They will feature more as pulp and fantasy enemies rather than sci fi; as Weird West predators which roam the buffalo plains; fighting against 100 Year War longbowmen etc - I wanted to make them less slimy and "alien" and more "natural" and insectile. The little swarm Tyrannids do look like some sort of giant desert flea-thingie and the big ones do have a bit of a "mantis" vibe so I think I succeeded.
. 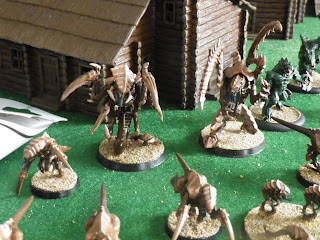 I was really fast, slapping on an undercoat, using a lighter shade for the "shell" or carapace bits, and highlighting with a still lighter shade.  Viva la craft paint!  My only "detail" was the blue tongues. 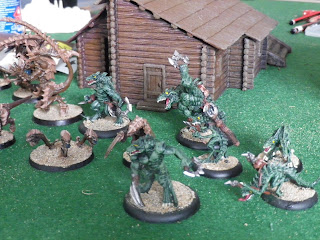 The Lost Ones are from Helldorado: the conquistadors-invade-Hell theme of the game is very awesome but it was kinda obvious the game was never going to gain traction - I've tended to re-purpose the minis for other games.  They'll make a good savage tribe in a pulp "Lost World" genre pulp game.  In hindsight I should have used a more contrasting light shade of green to drybrush over the top to make the muscles "pop" more. 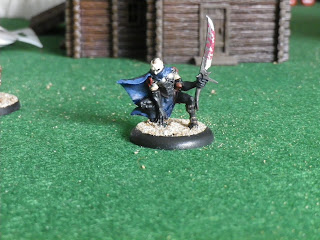 Bonus points if you can identify this guy....

Another thing I've been doing is "touching up" old models; perhaps they have chipped paint, or need rebasing, or would benefit from a wash or highlight.  Some merely had meh paint jobs.  This is also fast, and has rejuvenated many of my older models.    Do you have any wince-worthy paintjobs? Perhaps you can simply tidy them up rather than starting from scratch....
Posted by evilleMonkeigh at 15:53