I only saw the trailer for Mortal Engines and although the "tracked cities" seems ridiculous I kinda love the whole landship-but-a-city idea. It's probably too "young adult" for me to enjoy, but I plan on watching it soon for inspiration. As the google group discovered, the idea of "landships" has legs.


Toss in the videogame "Deserts of Kharak" and landships are back on the menu, boys!


Deserts of Kharak is a pretty good RTS by the folk who made the classic Homeworld, and a good source of gameplay ideas for a landship+tank game.

So..... I've just ordered some 1:300 tanks.  Lots of  kinda steampunk/dieselpunk-y ones from prewar.  You know, the tanks which were rubbish in WW2 but LOOKED cool. Or at least, like a mad inventor threw them together.  I love what I call "developing periods" - when technology was not settled and there was no "best"design. Air combat now is very stale.  The basic fighter design hasn't changed much in 20-30 years. Soviet and Western jets are virtually identical.  Contrast this with the madness of the 1940s-60s, where we have F-104s, Mirages, Phantoms, Vampires and Sabres.  Or Napoleonic - boring! - it's just identical soldiers but with different coloured uniforms. Contrast that with the pike-arquebus-swordsman tercios of the 1500-1600s.

Well, in my world, giant landships will serve as mobile bases to repair and refuel swarms of light tankettes, like a tank-aircraft carrier of sorts.  Brigade Models have done a landships themed game, but unlike their excellent aeronef, their landships look... kinda crap.  Like I could do better with balsa wood and blu-tac.  The now-defunct Spartan Games did the Dystopian Wars but the cartoon-y models never appealed.

Tankettes are pretty cool. With 2 or 3 men crews, they are the light "fighters" in the game.

My favourite is the Mark VI - it reminds me surprisingly of a modern Wiesel used by the German airborne.

I mean, look at stuff like the CV/33....
Turretless MGs, StuG-style? Yes please! 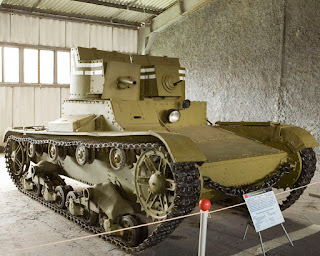 I may expand to armoured cars (there's some weird ones for sure!) and I'm going to use a few half-tracks and Bren carriers for logistics. But what about the big hitters?  Well, nothing says "heavy tank" like lots of turrets.  Lots and lots of turrets.

If tankettes are the "fighters" then we need some "destroyers." Tanks like the T-35 will work well as slow, heavy hitters.

With its extra rear turret and extra piping and engine bits sticking out, the Char 2C seemed purpose built by a mad steampunk scientist.

But what of the landships themselves? I'm thinking just more multi-turret tanks like the Char 2C, but in 15mm (1:100) instead of 1:300 (6mm).  That should create an impressive size gap.

I'll just get a 15mm (or 1:76 or even 1:48) multi turreted tank, and file off any details that give away the scale - and "voila" - a landship.  Placed alongside the teensy 1:300 models they should be super impressive.

As for rules, I've been experimenting with some tank rule for 15mm (posted on the google group) which I think I tested a while back.  I'll simplify them (FFTW3 will give useful ideas) but I want rules for a campaign (i.e. players control landship each, plus 8-12 tankettes and 4 or so heavy tanks). The tank crews can be upgraded and gain skills and perks like a RPG, and perhaps some mods to the tank itself (i.e. "tuned engine" +20% movement speed or "extra armour bolted on" +1 armour).

Whilst I am using the historical tank stats as the basis for my forces, I'm going to deviate from reality where needed (i.e. FT-16 won't go 5kph to scale with other 50kph tanks!) based on good gameplay rather than realism. Not that I really need to justify deviating from realism in a game focussing on giant landships that roam the inner deserts of the Hollow Earth....  Hmm, I wonder if I can find dinosuars in a small enough scale to match....
Posted by evilleMonkeigh at 08:59