Ronin - Skirmish Wargames in the Age of Samurai (Rules Review)

These rules have been sitting on my bench due to my enforced absence from gaming, and I am very keen on cracking them out and giving them a go.  I've got Perry samurai undercoated and ready to go, and a whole town full of chinese puzzles-cum-Japanese buildings in various states of assembly. (I'll do an article on both of the above shortly).  The small 2x2ft or 3x3ft boards recommended also appeal - both easy to make and store.

The game aims for "4 to 20 models" which is a pretty good sweet spot for 1:1 skirmish gaming and it also uses a "dice pool" which got me very interested. I am interested in dice pools which add an aspect of "resource management" and decision-making to your combat - you don't simply push models together and roll dice, but you get to decide HOW they fight. Even better, unlike the similarly-themed Bushido, Ronin allows you to make random lists from generic samurai miniatures instead of having to use special named miniatures made only for their game. 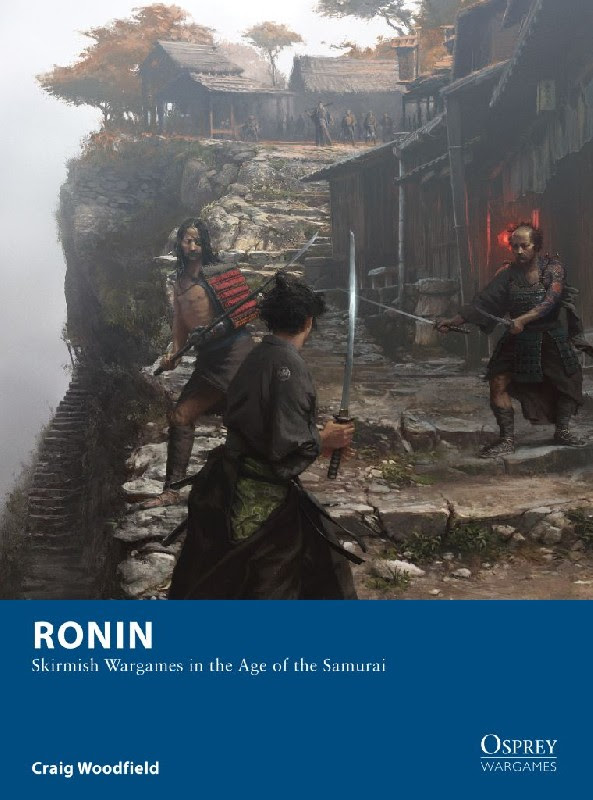 The rulebook is good value with enjoyable pictures and art


The Shiny
This is another of the new Osprey rulebooks. Like In Her Majesty's Name, it impresses in the "value for money" stakes.  63 softcover glossy pages (most of them rules) with rather small font - so pack your reading glasses.  At about $15, the full-colour (dare I say Osprey-like?) pictures and inspiring pictures of models in action break up the text, without dominating the pages. A clear table of contents and a quick reference sheet (also available as a pdf) are as useful as always. Good production values and great value, considering I often pay $25 to $30 for rules that look like they've been put together with a home inkjet printer, and $15 barely gets you a pdf at the Wargames Vault.
Good quality, great price. Two thumbs up.


The Stats
Models rank from Rank 5 (heroes), 4-3 (elite soldiers), 1-2 (regulars) all the way to Rank 0 (peasants). Their combat pool of dice varies depending on their rank - with heroes having 5 and peasants having only 1.  Furthermore stats include initiative (who hits first), fight (melee skill), and shoot, armour, and weapons do what they say on the tin. Some models have special attributes and all troop types are assigned an overall points cost. 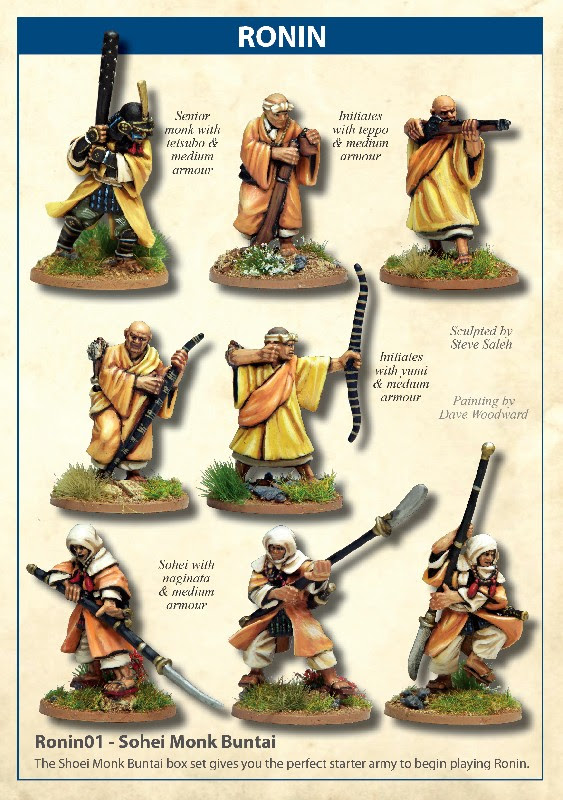 Movement: Starting at the choice of the player with priority, players alternate movement between individual models.  In an interesting twist, players may opt to shoot instead.  As there is a later opportunity to shoot, player with bows may be able to fire two quick shots in a turn.

Actions: Players can perform a range of actions, such as shooting (possibly for the second time), perhaps reload a musket, pick up an object or a range of other activities.


Priority & Morale
Players dice off to decide who has priority. They then test for morale depending on circumstances - if they have lost a leader, or a significant amount of their troops. Troops that are wavering must individually test to move into combat. Troops that are routing must individually test or attempt to escape off the table. As a player's "rank" is added to a d6 in tests, it follows that higher rank players have better morale.

Movement
Movement is pretty standard 6" - players who are out of contact can "run" up to 9" and wounds or difficult terrain can halve movement.  A few interesting (but sensible rules): as Japanese internal walls are flimsy, players can move "through" them counting as difficult terrain, long weapons like naginata are at a penalty when used indoors, and players who are fighting in water and are "stunned" have a chance of drowning. I also liked the ability to forgo movement to take a hurried "snap shot" with a missile weapon.

Shooting
Basically a player rolls 2d6 + Shoot skill vs a target number (usually 6, modified for cover, armour etc).  Pretty commonsense. My only issues are modifiers which require you to remember if models have already moved or shot this turn (if you have only 10 or so models you should remember.)
There is also quite a few modifiers (11) for range, target/firer status, but they are all on a quick reference sheet.
Combat
I was looking forward to this, as I said, I am very interested in the idea of a "Combat Pool" of dice you can "spend" or manipulate.  I was a little concerned tracking dice "spent" would be a pain, but since all combat occurs at once, and you can do one at a time, this is not an issue.

The players alternate to choose a combat to resolve.
Players secretly choose attack or defence counters before the fight, up to their maximum (i.e. a player with a Combat Pool of 4 could choose 2 attack, 2 defence - or 1 attack, 3 defence... or any combination thereof).  They then reveal the pool and place it in front of them.

Players roll a d6 and add their Initiative to see who attacks first. They can "enhance" their initiative by spending a counter from the dice pool. Striking first is good - injured opponents may not be able to strike back and dead opponents certainly don't!

If the attacker wins, he can stun, wound or kill his opponent - depending on how much he "won" by.  Winning by 1 simply stuns an opponent - winning by 6+ kills him outright.

Enhancing
As you can see, melee is more interesting than the usual "shove models together and chug dice" as the ability to spend counters to "enhance" moves adds an additional layer of decision making and tactics to the actual resolution of the fight (which are usually "out of your hands" and totally reliant on dice rolls in other wargames.)
Wounds
You can choose to subdue or disarm an opponent, but if, like me, you prefer your opponents to be dead, here's how it works.  If the attacker beats the defensive score, check the "margin of success". If the attacker wins by 1, he temporarily stuns the defender.  If he wins by 2-3, the defender has a light wound, 4-5 a grievous wound, and 6+ is a critical wound which takes the target out of the fight.  Each level of wound increasingly hampers the injured model, with penalties to initiative, shooting, fighting ability and combat pool.

I'm never keen at tracking wounds on models, and tokens tend to "clutter" the board.  I'm lazily using "tiddlywinks" coloured white-yellow-red to represent stun-light-grievous wounds but a more artistic person could probably decorate markers so they blend in (maybe "blood spatters" of increasingly gory-ness).
Action Phase
This is where models have a second chance to shoot, or could reload a musket or carry out miscellaneous tasks (like looting bodies and collecting heads for their daimyo) or simply rest and have a better chance of removing a stunned counter. 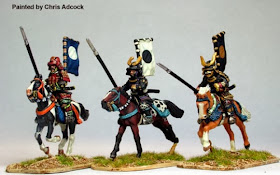 Perry Miniatures have a  good range and always have nice sculpts.

Other Stuff
There are rules for mounted troops, and lists of "Attributes" (fast, tough, fearless, bodyguard etc) and "Abilities" (usually giving re-rolls to a favoured weapon - i..e Kentjutsu for swords, Jujutsu for barehanded and Bojutsu for monks' staffs).

There are also optional rules for Fatigue which can see models in close combat accumulate fatigue counters which hamper its initiative and shooting ability. A nice idea, but personally, I'm avoiding the extra counters and dice roll checks.

Factions & Army Lists
Each faction has rules for its composition (to prevent min-maxing) such as "you must have three Rank 1 troops for every Rank 2 model" as well as faction-specific special rules.  The factions are the Bushi (normal samurai), Ikko-Ikki (a religious sect of mostly peasants), Sohei (warrior monks), Koryu (a martial arts school), bandits, Koreans, and Ming Chinese. You then additionally hire mercenaries, warrior monks, ninja and shugyosha to add to your faction.

The lists are pretty "historical" with no fantasy elements.  There is a handy "points calculator" on the Osprey website which would allow you to stat up your own models or adapt it to other periods (i.e. medieval, for example.)   Personally, I wouldn't mind a few generic  templates for the common types such as human-animal shapeshifters, ghosts and demons as it could make for fun scenarios. Speaking of which...

Missions & Campaigns
There are weather rules (rain, mist, night etc) and also rules for randomly placing terrain. You have a half dozen missions. Besides the generic "skirmish" you could capture an objective, duel, assassinate a target, fight in a tournament, or defend a village (*cough* Seven Samurai).

A suggest method is that players create small warbands (or "buntai") from a master roster i.e. player play 150 point games, but players start the campaign with 400 point "roster" overall, with grievously wounded models being "rested" for a game, and deaths slowly whittling down your overall roster.

A concern: the author himself says certain factions are weak, or at a disadvantage against x faction, which sounds like poor balancing of the factions.

There are simple progression rules, allowing lowly Ashigaru to rank up to a Samurai hero.

Wargames Factory hard plastic make cheap bulk troops (25 for $20). One pack would give you enough Ashigaru for several warbands. However I find the multi-part models a pain to assemble.

TL:DR
For those who couldn't be bothered with the wall of text:

+ Pleasant, practical rulebook, good price
+ Generic rules allow you to use any Japanese miniatures (unlike Bushido)
+ Combat rules and "dice pool" mechanic adds tactics to the melee (instead of just chugging dice)
+ Straightforward mechanics
+ Simple campaign and character progression
+ points calculator allows you to "stat up" your own models

- I'm not a fan of "markers" cluttering the tabletop
- small print - bring your reading glasses!
- quite a few modifiers for shooting
- a little slow playing
- faction balance?
- keeping track of who moved
- I'd like to have seen rules for oni, kitsune, tengu etc as they are pretty common in Japanese literature; it's pretty "straight historical" compared to some samurai movies

Recommended:  Yes. A decent game, allowing you to use any miniatures, and an interesting melee mechanic, with the ability to play campaigns. And $15 for a full colour rulebook is cheaper than most pdfs nowadays...

.....Or you could try... If you have a copy of GW's LOTR, you can try Legends of the Rising Sun for free. It is less "tactical" but plays faster and can handle more troops.

I'm not a fan of Bushido as you may have guessed - as you have to buy their special "named" models complete with stat cards - which cost $12+ each (opposed to $3 for Perry/Kingsford metals). I call this a "Malifaux" style game.

Besides the cost, I find it irritating when three identical heroes (usually identically painted) show up at a gaming day: "Oh, my Lady Justice will fight your Lady Justice."  "Didn't she die last game?" "Oh this is a different Lady Justice." Bushido does have some nice monsters and mythical beings, though, and I like the minis.

Instead of 28mm - Zvezda do a rather complete range of 1:72 Samurai - this was a pic I linked from aller @ CoolMiniOrNot.
evilleMonkeigh at 01:33
Share