Legends of the Old West

I recently bought a bunch of Warhammer Historical rules during their 50% off sale.   I like the LoTR system that underpins the "Legends" rules and find the move sequence infinitely preferable to the usual IGOUGO format.

Back from school camp, I hastily painted an outlaw and lawmen band, whilst watching "Tombstone" "Open Range" and "Justified" for inspiration. Val Kilmer was awesome in Tombstone - possibly his best ever role. I also really like Justified - all though not "old west" per se there is enough gunplay and quickdraws to rate a mention. Timothy Olyphant carries the show, like he did in Deadwood (possibly the best ever Western).

The LoToW rules seem simple, and whilst not possessing the tactical naunces of, say, Force on Force the game was quick and smooth with plenty of fun moments.  I picked the "High Noon" scenario and grabbed out my unpainted Sarissa terrain and some undercoated Renedra barrels.  Rather uninspiring to look at, but after a week on camp with a horde of 10 year olds I wanted to "get my gaming on" again. 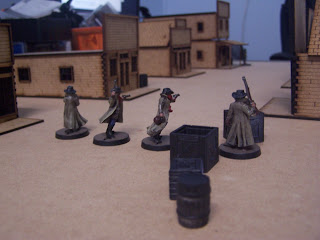 The outlaws stare down the main street
The outlaws charged up main street whilst the marshalls tried to flank them to either side.  The marshalls drew first blood, sniping an outlaw hero from the length of the street as he hugged the cover of the building. 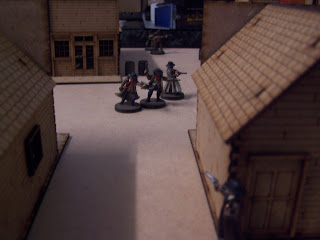 The outlaws are about to be flanked!
The other outlaw hero and the desperado leader shot a marshall attempting to flank them, but the marshalls go into a building to take them in a crossfire.  The next few turns were hectic, with improbably misses, heroes fanning six guns into hordes of enemies and heroic actions from the respective leaders.  Another outlaw hero was gunned down and they fled off the main street away from the marshalls who were taking cover in a building.  The marshalls pursued. 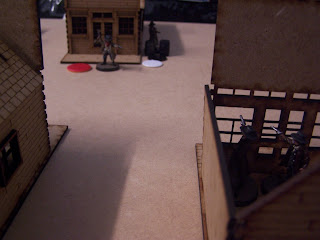 The marshalls fire from cover. The lift off Sarissa Precision roofs are shown to good advantage.
Cornered, the outlaws got the drop and initiated a last ditch charge.  The marshall leader was hit a second time by a shotgun blast aimed at a deputy in front of him, but the other lawman hero battered his opponent in close combat to force a "Head for the Hills" test.  The desperado leader who had fought heroically until then, failed the first Pluck Test of the game and the banditos made a run for it. 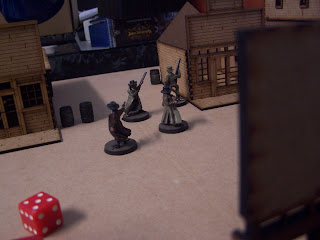 The desperado chief fails his morale test and the bandit gang flees
On the campaign tables, the desperado hero gained "Deadeye shot" as, coincidentally, did his heroic sidekick who recovered from his battering by the marshalls, albeit with a chest wound that would prove troublesome.

The chief marshall  "Survived against the Odds" and gained "Trick Shooter" as did the rifleman henchman who scored the games first kill.  The deputy with 2 kills gained "Trigger Happy".  The marshalls sustained the only death of the game with the shotgun henchman later succombing to his wounds.

EDIT: I just realised that I rolled on the Skills table before the attributes table - this will need to be re-rolled which will give more random-ness in skill ranges.

All in all:
A simple system, easy to play, and for players of GW LoTR games, there are no surprises here - it is practically Middle Earth with six guns.

Not incredibly tactical, but full of exciting incidents and deeds of derring-do and supported by a robust campaign system.

Very enjoyable.  The quality rulebook is well worth the price, and definitely a steal at 50% off.
Recommended.

Also worth looking into are: The Rules with No Name (free but, I feel, aimed more at 1-player-1 model convention games) and Six Gun Sound (arriving in the mail soon - when it comes I will run an identical scenario to this one and compare the two systems)
Posted by evilleMonkeigh at 05:51