I have finally got my long-delayed Terraclips.  Designed in collaboration by Wyrd (makers of Malifaux) and Worldworx games (well known for their pdf construction kits) these rules were supposed to be released in August 2010.  However they were re-worked as they were found to be 'of insufficient quality'.  Which speaks well of the companies involved - they sacrificed the quick buck in pursuit of a higher standard.  There has been further delays as demand has outstripped supply.

Storage room (or lack thereof) is the curse of most terrain. The pieces came in a single box (pictured at the back of the photo below) about the size of a rulebook.  Terrain storage issues are now a thing of the past.  The terrain for a Mailfaux board takes up less space than the rulebook!

The card terrain, although not etched or to the super-high standard of the latest Space Hulk, is excellent quality.  The pieces fit firmly together and there is a 'solid' feeling absent in many card constructions. My wife snatched the boxes off me and immediately started to assemble a "Sewers" board.  There is a real LEGO-like element in construction.
The pieces are double-sided with different designs on each, allowing for a wealth of build options.  The art is quality and has a pleasing 3D effect. Note the bridge crossing the sewer towards the far end of the board. 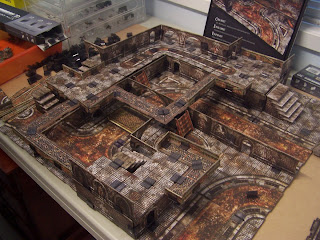 There are plenty of pieces in a single box.  This "Sewers" kit provided enough terrain for a complete skirmish board approx 3 x 3ft.
You get plenty of "bang" for your buck.  I was surprised at the large quantity content that was in the box.  You can easily build the terrain shown on the box art with a single set and have leftovers.

The terrain is also very versatile. I am planning on using it for fantasy (Song of Blades, Mordhiem, LOTR), pulp/horror (Strange Aeons), Victorian Sci fi, and medieval games.

Although I am overwhelmingly in favour of this terrain, I do have a few concerns.

The connecting 'clips' are sold separately.  This is claimed as a 'feature' to save you money, as you can buy only the clips you need and save $$$. In practice, I found I used 3 sets of clips for only 2 sets of terrain. There are 40 of each clip type in each box. After building the terrain, I found the "I" clips and "L" clips were all used up but I had truckloads of "T" clips left over. So the proportion of the clips per box (for me at least) was wrong. I will end up buying more, not less, clips. This is really annoying.

Affordability. I really feel the lack of connectors hurts the 'value'. A terrain box is $50 and a box of clips is $20.  I dislike the fact that I could have another awesome terrain board for the cost of two boxes of stupid plastic clips. $50 for a full featured skirmish table is a bargain - $70 is less so.  However given the man-hours to scatch-build something similar it is reasonable. For gamers like me who prefer to spend time painting minis to constructing buildings, it is a godsend.

Upper stories will struggle to support your typical 40x40mm base heavy metal models (like Confrontation Wolfen or Warjacks) unless very well supported. It is still card terrain, after all.

While the wall connectors are surprisingly unobtrusive, the ones connecting the floor tiles stick out quite prominently.  I notice there are none featuring on the front of the box - I presume the box cover photo has them superglued together.

There is a 1" grid sneakily hidden into the flooring design if you look for it - which could be a good or bad thing, depending on how you look at it.  For me, it is so unobtrusive it isn't an issue and may prove handy for RPG players. 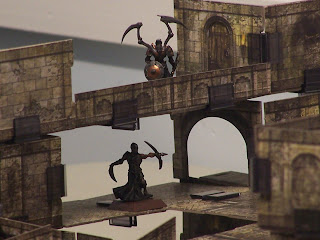 I did not like the "Streets" set as well as the "Sewers" set as it seemed to have less build options, and I feel perhaps you need a second box set to get the most out of it.
Setup time is rather long. It is easy to store, but not fast to construct.  You definitely won't be able to take it over to your mates house and setup a table in 15 minutes for a quick game - my wife (a LEGO/Meccano veteran) took a few hours to build 2 tables.  Obviously with practice it could be done faster, but setup/packup time is quite significant.  Verdict: Easy to store - but not as portable as you might think.

On the upside, it is rather fun to set up and you could definitely talk your kids into putting it together for you!

Overall verdict:
I am in love with this terrain and am buying multiple sets.  Not that I need to - there is enough in each individual box for a very complex skirmish  table - but simple because I want to build a huge 8 x 8 mega-table cityscape with multiple levels - and with Terraclips, it is now possible.
Posted by evilleMonkeigh at 21:07