Grabbed one of these off eBay for $25 and I must say it looks the goods. 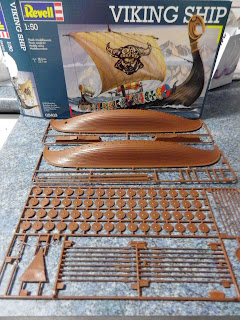 I'm not a fan of "modelling" but for the price the Revell longship is worth a look. The sails (not included in the shot) are hard white plastic, in a "billowing" shape.

GW's LOTR stuff is, ironically, pretty lifelike and one of the least "heroic" (i.e. ridiculously oversized) miniature lines - so I used it as my "frame of reference." 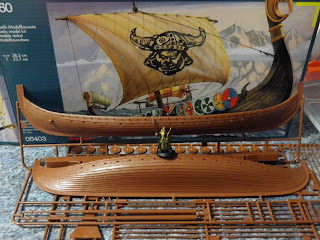 As you can see, the longship seems a little small - but not jarringly so.  The miniatures' base makes it appear proportionately larger. 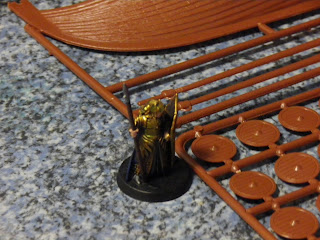 If you look at the size of the Viking roundshields, however, the scale seems pretty spot-on.

The "rounded bottom" of the model ship means it is only really good for acting as a "beached" longship - but that is all I really intended it for anyway - as a scenario marker for a raid, as I cannot think of any Viking boarding actions I would need to re-enact.

I dislike multi-part models....  ...but after all this is a "model kit" designed for those strange masochists enthusiasts (who probably also enjoy meaningless frustration in activities like crosswords, Sudoku and puzzles) it is fairly restrained with a modest but not unreasonable amount of parts.  I'd say it looks like an "average" to "easy" kit - but I'll get back to you on that.

I also notice there is a HMS Beagle which might stand in well for a pirate ship, and a S-100 S-Boot which might be useful in WW2 scenarios.

Email ThisBlogThis!Share to TwitterShare to FacebookShare to Pinterest
Labels: Historical