The Curse of Multi Part Miniatures (Or, the decline of Infinity Minis)

I notice I passed 100 followers and 100,000 views during my baby-enforced hobby holiday, but I'll forgo the usual posts in return for allowing myself to deviate from my usual format for a brief rant.

Yes, it is the curse on modern gaming - the proliferation of the multi-part miniature.

Disclaimer: Now I'm not saying there isn't a place for multi-part miniatures.
Namely, in cheap sets like Wargames Factory, where they sell bulk sprues with 4-5 basic poses for mass armies and allow interchangable leg/torso sets to add some "variety." Or Warlord plastics where they use different heads to allow Confederate and Union troops to be built from the same box.  They are usually easily slapped together and usually have the minimum necessary to allow some variety.
The multi-part factor allows a range of models to be made with a limited number of sculpts, helping keep costs down and allow mild (and easy) tinkering by the gamer who wants more poses and features.   I nominate Perry miniatures as an example of "good practice"; separate torsos and legs make a two-part mini easy to assemble but allow a good range of sensible poses. 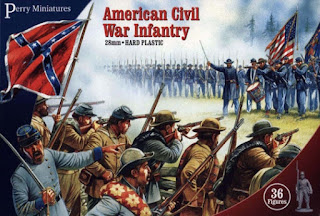 When plastic minis are sold cheaply in bulk, a limited level of multiple parts balances production cost with variety.
There's annoying....
Games Workshop has long annoyed me with their infamous three-point attachment (left shoulder, right shoulder, plus one hand needs to be attached to the gun). Sometimes this requires a clamp or an extra set of hands, and seldom comes out "just right."

..and there's going to far
However, Infinity has recently been enraging me with their multi-part "redundancies."   It's now a "fourpart attachment" sometimes - also they seem to be trying to ensure each arm, leg and head is individually attached.... it's like the minis were designed as a puzzle for octopi. Why, I ask?

"The poses are dynamic"
If the poses are so dynamic as to absolutely necessitate multi-part sculpts they are often over the top they are impractical for gaming purposes, or simply stupid. 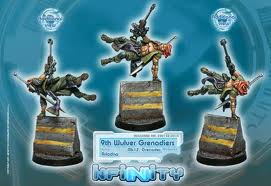 Exhibit A: Leaping Wulver - so dynamic it's only fit for a diorama

"We need to cast in multiple parts to maintain a quality sculpt"
Actually, the excellent Empress/Red Star miniatures have comparable quality to Infinity.  They don't need 16 parts to make a single 28mm figure. In fact they seldom use more than two. They also cost $2.50 not $11 for a model. (Actually their Russians are a cheap way to bulk out an Ariadnan force) 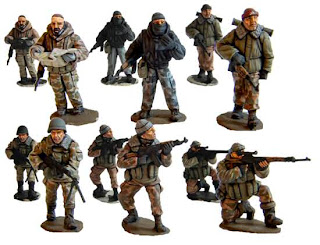 Exhibit B: Red Star/Empress Miniatures  These have fine detail and excellent sculpts. They don't need a dozen parts to make a good 28mm model, either.

"People need to customize their models"
This is complete BS in a game like Infinity where there is likely only ever one of a particular model on the table at any time anyway, but even so:

(A) the average Infinity miniature has a locking socket (which seldom exactly lines up)which means minis (if attached properly) has an "exact" pose which is the same as every other similar model.

(B) If people want variety they can simply stop slavishly copying the studio paint schemes.  I know not everyone does this, but I'd estimate 95% of armies I see are exact copies of what is on the cover of the miniatures box or rulebook.

"Kitbashers need the posability"
Anyone who buys two $11 boutique models with the intent to destroy one for parts is also more than capable of attacking them with a saw and copious greenstuff; and are not going to be too bothered if they screw up either.

Does anyone else feel this way?
I personally do not enjoy spending 30 minutes+ to assemble a single model. But obviously the miniatures manufacturers are catering to someone. Maybe there are people who deeply enjoy spending an hour on each miniature, and are proud of their results.  Perhaps mini makers think they making our hobby "deeper" by giving each figure with an Airfix-kit level of assembly.
I am in it to "wargame."  Modelling and painting are part of the hobby, obviously. But when I spend more time assembling models than painting or playing with them... meh.
Or am I simply an embittered loner with opposable thumbs?

Ironically enough, these highly dynamic monks are 2 and 3-part models - simple and straightforward to assemble.  So dynamic does not naturally = millions of bits...

RANT #2:  The production quality of Infinity has dropped drastically.
I know why Infinity miniatures are $11+. It's because they now come with about double the actual miniature's worth of metal in flash and miscast pieces.

Every single piece of the models I assembled this week had copious flash or chunks of metal from the casting process still attached.  Removing these was very difficult at times and significantly marred the model (especially a model with such fine detail). The fine detail means mold lines (also very common) are harder to remove as well, as even with a fine file your removal attempts are usually quite noticeable.

I've had to send for missing parts three times in the past year.  Tip: keep your "error code" slips of paper handy until you've fully assembled the model. While Corvus Belli customer service is excellent, when you pay $11 to $40 for a single metal miniature I feel you have the right to expect molding quality at least equal to your usual $1-per-miniature bulk plastics.

After having to "doctor" every piece of about a dozen models to make them usable, neat or even to simply make it fit where it belonged, I felt tempted to lump all the bits into a box and return them all, churlish as that may be.

I found it ironic (and very frustrating) that I assembled 100+ pieces worth of Viking longship - from a legitimate MODEL kit - faster than two Infinity miniatures. I also didn't have to take a file or knife to EVERY SINGLE PIECE .

I love the fact Infinity has been a success story, carving a niche outside the Warmahordes and GW kiddie-crack empires. But I think they may have outgrown their quality control...... 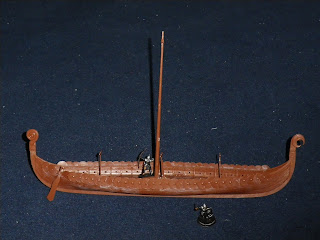 By the way, here's a photo of the semi-finished Revell Viking Longship. It scales very well with 28mm. It was relaxing compared to assembling the Infinity stuff!
Posted by evilleMonkeigh at 01:15