Initially I was unimpressed with this TV series, perhaps spoilt by the drama and production values of Game of Thrones.  But as the series has progressed I have become more and more interested.  The battle scenes are good, and the portrayal of vikings, whilst not 100% accurate, is far less Hollywood than I initially expected.

Inspired by the small scale skirmish potential, I have decided to finally plunge into Dark Ages warfare.  I already have the interesting SAGA ruleset, and I am impressed by the flexibility and versatility of Lord of the Rings.  Although SAGA is popular and purpose-built for Viking warfare, and I really like the layer of tactics introduced by the battle-boards...  ...I am likely leaning towards LOTR.  The system is well proven in the Legends of the High Seas/Old West series of skirmish campaign games, and allows for individual warriors to progress, something SAGA currently cannot cater for.

As a bonus, terrain requirements are relatively light - I am tossing up between grabbing a few pre-painted hovels by ACE or simply scratch-building my own.

The 4ground mdf prepaints are dirt cheap at $15ea, but it would also be simple to make my own. A benefit to viking warfare; terrain is not a major issue.

I have recently got a Revell 1:50 viking longship. The shields in the longships perfectly line up with the shields on the miniatures I have, which was an unexpected bonus. 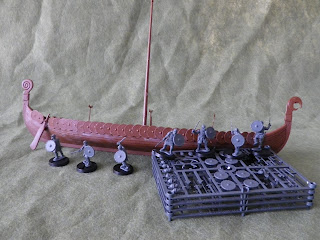 The viking longship scales (to my eyes anyway) perfectly with 28mm miniatures. 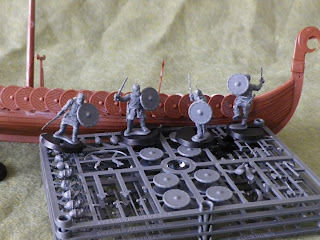 The shields on the minis and the ship itself are identical in size.

Wargames Factory Miniatures Review (Viking Huscarls, Viking Bondi)
Wargames Factory miniatures have a bit of an indifferent reputation.  A bit of a shame, as they are priced well (32 for $20), and make their miniatures in conjunction with wargamers (the Liberty & Union League). They even tried to recycle used sprues....

Multi-part Models... every miniature unique....
Well, I have a bone to pick with the Liberty & Union League, as they wanted the models with separate arms, legs and heads. And regular followers of this blog know how much I adore multi part models. This has enabled me to build every model with its own unique look. Unrealistic, contorted, but unique, tis true.  Although easy to attach arms and heads, the joins look a little "off."

The Miniatures look unique but most possible poses would give this girl a run for her money. The archer arms in particular are rather nasty. I'd recommend using Perry WOTR archer arms instead. 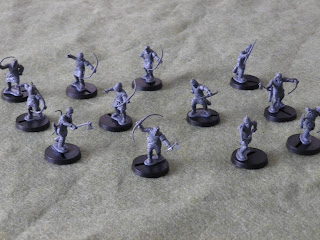 The archers were the worse culprits for weird poses. It was hard to do a "shooting" pose that didn't look like a drunk playing air guitar
Bitz Galore
You can't complain about what you get on a sprue.  Spare heads, and enough arms to make every man look like Shiva.  The sprues are very handy for spare heads, arms and weapons - though the weapons are rather finely proportioned.

There's so many spare arms, you could kitbash this dude if you wanted.  Admittedly, he'd have viking headgear.
Fine Scale
They are comparable to GW's LOTR 28mm with fine proportions.  Weapons in particular are quite small, and the models are indeed 1:56 "true" scale rather than the more heroic 28mm.  A quick google around shows they do mix fine with Gripping Beast metals and plastics, which surprised me somewhat. 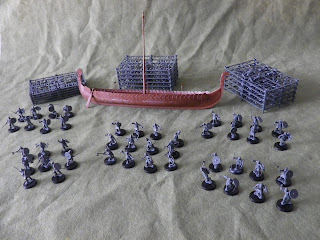 You get a lot of spares. As you can see, after assembling 44 vikings, I have 20 bodies, 30+ heads, about 100 pairs of arms, and enough weapons to arm them three times over.

Detailing
Detail is quite reasonable and again I would compare it to GW's LOTR range by the Perrys. 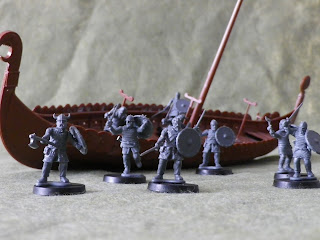 Detail is sound but unspectacular, and should be pleasant to paint. Weapons and arms are a bit fine and I bent/broke a few weapons when taking them off their sprues.

Recommended*: Well, I'd buy more Wargames Factory stuff (and in fact ordered some Ashigaru for my samurai project), and the sprues are solid value for the kitbashing purposes alone. I could make two SAGA warbands for $40 which isn't bad value.  I found the unarmoured "Bondi" sprues the most versatile.  The most annoying thing was the weird poses, due to the multipart nature of the models.  Apparently the customers wanted them that way. I'd like to find those customers, and force them, on pain of death, to put mine together in natural poses.

*EDIT: I've recently unboxed my assembled Wargames Factory vikings and compared them to my Gripping Beast plastics.  I'm changing my recommendation from "on the fence"  to NO based on
(a) GBP poses are far more natural
(b) 50%+ flimsy WGF weapons are broken from being in box - excessively more than any other plastics I have owned
(c) Multipurpose weapon hands look like crab claws on close examination
(d) flimsy weapons may be more realistic in size but just look a bit "off"

Gripping Beast plastics are simply better. Get them instead. My WGF vikings are either broken (a good half of them!) or sitting unused due to their noticeably inferior poses and weapons.
Posted by evilleMonkeigh at 17:34

Email ThisBlogThis!Share to TwitterShare to FacebookShare to Pinterest
Labels: Historical