That's a pretty bold claim. We have the heavily anticipated "AAA" authors like GRR Martin, Pat Rothfuss, Brandon Sanderson, Joe Abercrombie, Daniel Abraham, Scott Lynch and Peter Brett - but Kearney doesn't seem to even make the "B" list, which is rather astonishing considering his work compares favourably with all those mentioned, and tends to remind me somewhat of a mix between the "new fantasy" school and the late David Gemmell. 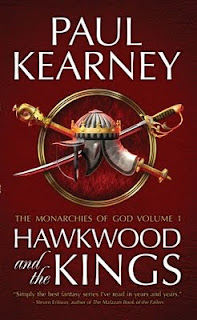 The Hawkwood books have been condensed into two omnibus editions - Hawkwood and the Kings and Century of the Soldier - which seem the best and cheapest way to get the whole series.

I'm focusing on the Hawkwood series as it is a good starting point. The Sea Beggars are considered better by many, but is incomplete, with the third book "due" since 2007 due to a publishing hiatus.

The Hawkwood series is fantasy, but its "world" mimics one of my favourite historic periods, the 15th-17th centuries dominated by the Spanish Empire. This is a world of galleons and muskets, but also includes magic and shapeshifters, duly opposed by the Inquisition and the ambitious Church.

The first book starts strongly, with a fishing boat encountering a drifting galleon with a dead crew... the hapless fishermen are promptly ripped apart by a terrifying creature hidden aboard.  It shifts to Aekir (Jerusalem) where the Merduk (Islamic) hordes are just sacking the city.  The dual storylines of the book are Hawkwood (sailing captain) on his journey to a dark and mysterious New World; and Corfe (soldier) a veteran of the sack of Aekir and destined to lead the defence against the Merduk hordes. 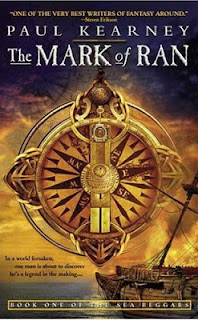 I found this series good but annoyingly incomplete. Apparently the final book "Storm of the Dead" is due out in 2014.

The Hawkwood books are excellent, with Kearney providing some of the best battle scenes I've come across. Many readers prefer the Hawkwood voyage over the Corfe military storyline, but I personally prefer the latter, perhaps simply due to the good battle scenes.

There is also plenty of intrigue - Kings, Queens and the meddling Church weave a tangled web of plotting, and in the background is the apparently unambitious Fimbrians - a sort of Roman Empire that once controlled much of the known world but has now retreated to become a kind of Switzerland.   Magic is on its way "out" and gunpowder and the Church are on the rise.

In the first books the seagoing kingdoms of the West face threats from without (the Eastern Merduk sultanates) and within (perhaps a more insidious threat from a church seeking secular power). But are there darker forces at work?  Guided by the log of the abandoned ship, a voyage to the New World faces many dangers, amongst them agents of a perhaps greater, hidden menace.

I enjoyed the middle books the most, with their focus on the military battles and desperate defence against the Merduks.  The last book (Ships of the West) was something of a letdown - it reminds me of the ending to the Lord of the Rings movies - it dragged on and on, passing many logical "ending points." I reckon it could have been hacked down and appended to the earlier book, the Second Empire, which was for me the climax of the series.

Steven Erikson said they were the best series he'd read in years.  I'm not an Erikson fan (there's a difference between treating authors like grown ups and lazily not properly explaining things/assuming everyone understands your own little D&D world) but he's on the money here.  Kearney takes some rather cliched historical and fantasy references and makes them all his own, whilst avoiding the trap of being overly drawn out and wordy.  He blends the "new fantasy" of gritty heroes, dark plots, heartbreak and complex intrigue with the readability of David Gemmell. All the more impressive in that his Hawkwood series first came out in 1995. 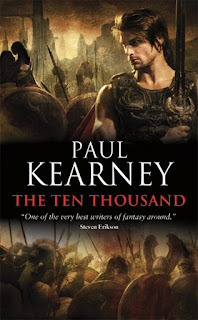 If you like the Hawkwood series, the Sea Beggars (with an even more naval flavour) is acknowledged by many to be better, but it is frustratingly incomplete.  Set in a world abandoned by it's Creator, the hero Rol is of the blood of an ancient race possessing magical powers. He is driven from his remote fishing village to be trained by a mysterious mentor, in a range of deadly arts.  Rol goes forth into the world to become a privateer.  The sequel is far more naval in nature, but ends rather abruptly - annoying since many have been waiting since 2007 for the ending to the series.

A "finished" series is his more recent work on the "Macht" - the not so subtle title "Ten Thousand" - gives away its roots - basically a retelling of Xenephon's Anabasis with a force of mercenary Macht (Greeks) stranded far from home inside the Assurian (Persian) Empire. Whilst its setting is far more vanilla (a.k.a almost straight historical fiction) than the "Hawkwood" series, it plays to Kearney's strengths.

TL:DR
Like great action scenes, gritty heroes, and complex plotting and intrigue, without having to wade through the 800+ page tomes which seem fashionable nowdays?  Paul Kearney marries the easy-reading style of David Gemmell with the gritty complexities of the "new fantasy" - and the more streamlined books mean you don't have to sign away a year of your life to try it out.

Recommended?  Absolutely. I wouldn't say he's above GRR Martin or Abercrombie, but he certainly deserves more plaudits than Peter Brett or Brent Weekes, all of who sell truckloads more books to much greater acclaim.  He seems to be able to finish a story without padding it out to 800-900 pages, which seems to be the "minimum" page limit  of a fantasy these days.
Posted by evilleMonkeigh at 06:08