I'd like to have shields.  Directional, preferably.  It would add an aspect of resource management and also reward positioning/facing your spaceship.  However, if it adds too much complexity, the trade isn't worth it.

Pics taken on my phone: 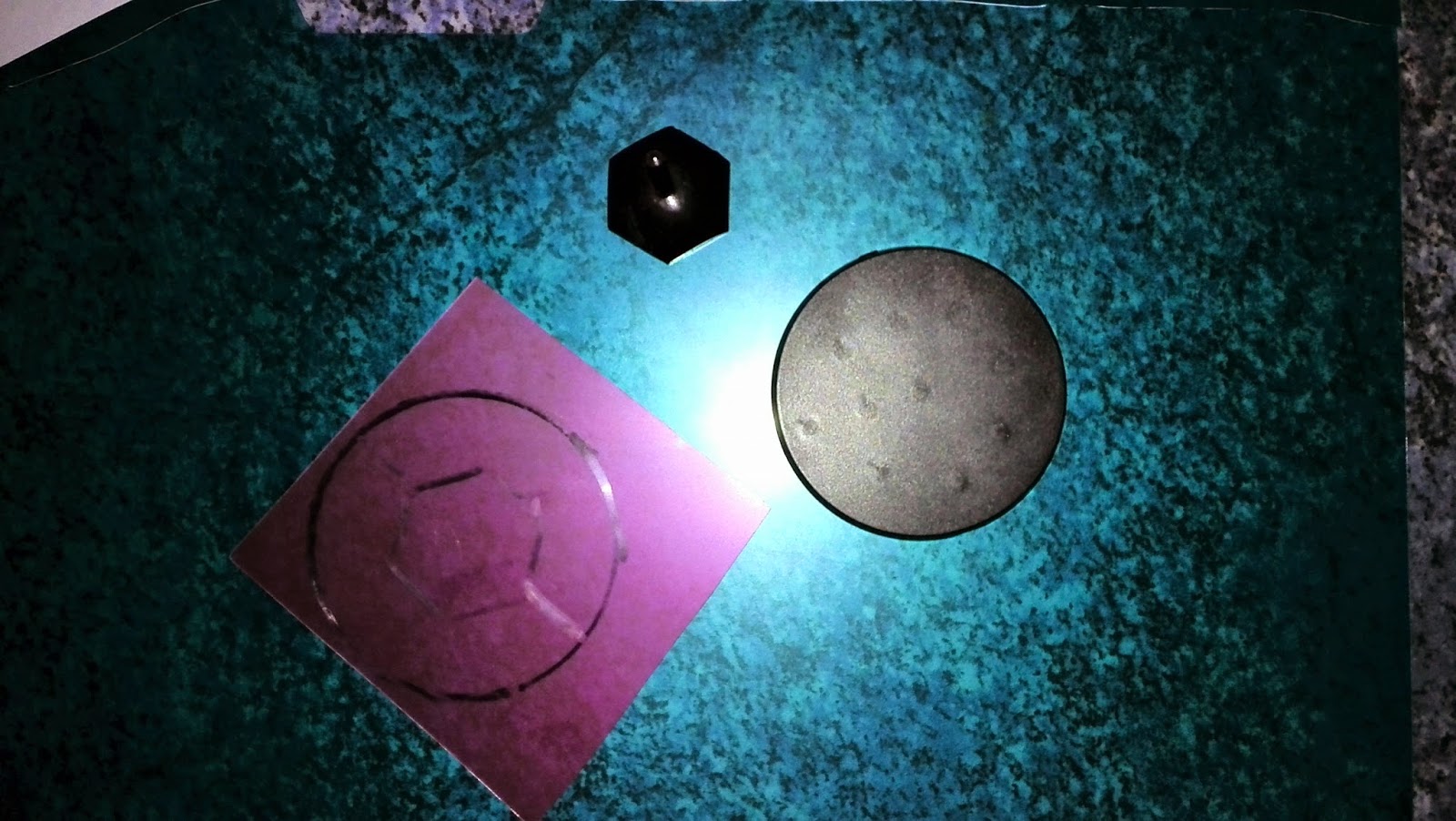 I made the marker with transparent plastic from a folder.  I traced the shape using a 50mm base and a starship hex base (the usual EM4 ones). 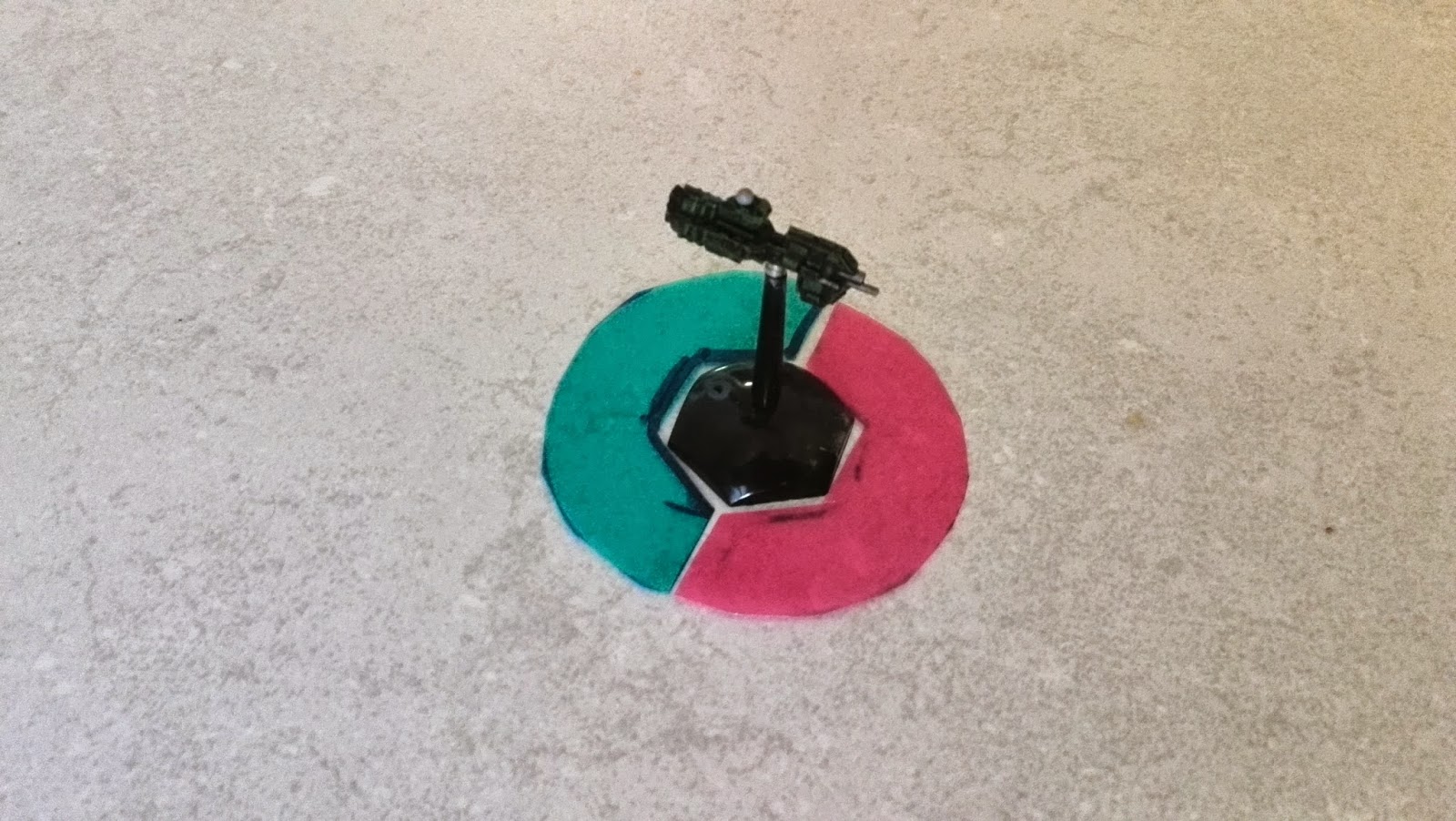 You could use different colours of shields to show shields full / failing / down.... but that's a bit complex for my tastes... 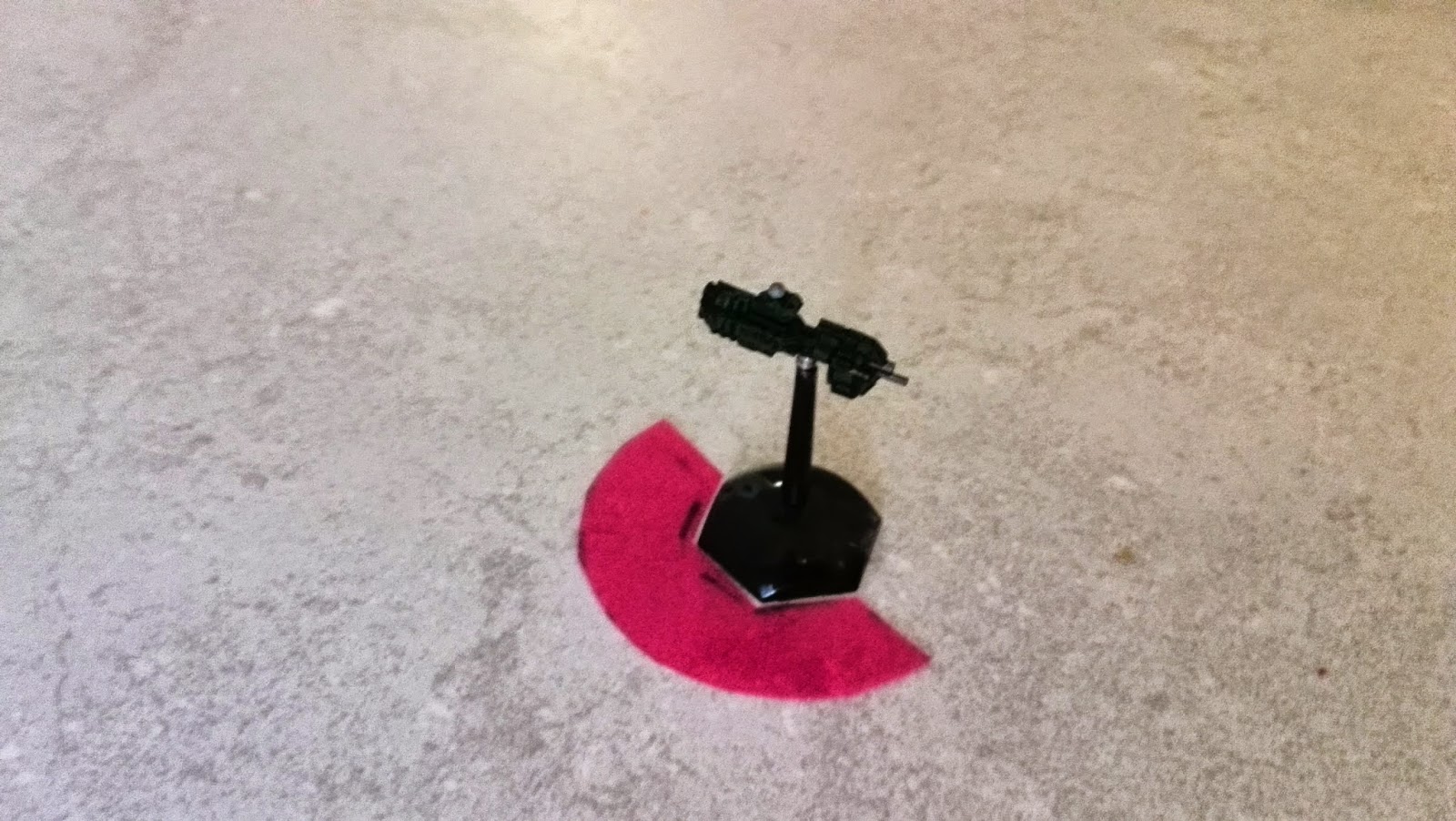 I'm going to use a simple shields are up/ down I think.  I only add the marker if the shield is DOWN - otherwise you can assume the shield is functioning normally.  This reduces the number of shield markers in play.

How might this work in practice?  Here's a few examples:

The "Battlefleet Gothic" Method
The shield absorbs a set amount of hits from each volley - say 3 hits. Any amount less than that means there is no effect - the shield shrugs off the hits and remains at full strength.  If it takes 3+ hits in a single attack, the shield is down for the rest of the turn and all later shots though that arc impact directly on the ship.  Has the benefit of simplicity, although I might as well use blast markers like the original game.

The More Convoluted Method i.e. Some go through, some don't.
From the damage rules in the last post, a attack dice (say d8) is compared to a defence target number based on the hull/armour of the ship (let's say 4).  The shields (if up) add a defensive bonus - let's say +2.

So the ship has a basic defence of 4, but 6 counting the shields.

Now, any rolls of 7 or 8 will go straight through and damage the ship - they exceed the hull and shields combined.   Any rolls of 4 or less have no effect - the hull would resist them anyway.  But rolls of 5 to 6 WOULD have damaged the ship if it wasn't for the shield bonus.  If the amount of 5 & 6 rolls equals the shield bonus (2) then the shields are down.  Any further shots would hit on 4+ as the shield bonus is now gone.

If the rolls had been 6, 5, 3 for example - no shots would have gone through, but the 6 and 5 would have collapsed the shields.

That's just one example. I don't really mind how the shields work, but I don't want any record keeping except shields up/down.  No shield boxes to cross out a la Starfleet Battles/Colonial Battlefleet - ugh!

Why shields?
Besides being a sci fi staple, they add more resource management and decisions to gameplay.  I.e. you can attack the side of the enemy ship with shields down - or manoeuvre to position your own damaged shields away from the enemy. Perhaps passing a crew skill roll would enable you to channel power to shields - i.e. a ship with rear shields down but full frontal shields could pass a crew check, and swap them so the frontal arc was down but the rear was up.  Or shields could be restored on a crew roll, at the expense of no thrust/energy beams next turn.    You can focus attacks to overwhelm shields, and you may use a fully shielded ship to block fire aimed at an unshielded one.  Shields add lots of decision making options. However.....

Shields - Counting the Cost
The problem is how much complexity is desirable or acceptable?  Although desirable, I originally avoided shields altogether as I thought the complexity/recording would be too high.

However one thing I DON'T want is having to tick off then rub out shield boxes.  I don't want any record keeping except maybe a marker like I've shown. That's a price I'm not willing to pay - I'll forgo shields completely rather than add more recording.
Posted by evilleMonkeigh at 01:33