The last of my pdf purchases. I primarily bought it to see how it would measure up to Frostgrave in its expanded form (Savage Worlds excellent base Explorer Edition has enough content to play generic fantasy, but it didn't seem a fair comparison).

As usual, I view it through the lens of "would it be good for skirmish wargaming" rather than its value to a RPG.  If you're a diehard RPGer, I suggest you read another review.

Characters
The race creation has your classic orcs-dwarves-elves etc as well as a useful "cultural template" - a list of simple, subtle tweaks to differentiate your races. Basically there are +3, +2 and +1 abilities which can be offset by -1, -2 and -3 negative traits.  Very useful for customizing new races/minis.
There are ~16 new Edges (troubadour, knight, assassin etc, as well as racial edges like barbaric rage)

Gear
There's about ~20 items of gear, of which half are useful for wargaming, and a range of new melee weapons like bastard swords, orc axes, flails, and crossbow pistols.    There's a few new armour types which will be useful.  There are siege rules but they seem to be added in for abstract/mass battle games, so whilst interesting they are not so useful for skirmish gaming.

Arcana
There's a bit of info on Deities and the likely powers/spells associated with them (i.e. gods of healing, justice, knowledge, nature, sea, war, thieves) which would be useful for making racial/religious magic.  There's also a completely new form of magic, Alchemy, which would be useful for steampunk games and the like.  I found it interesting and am now wondering what what an alchemy-based wargame might look like.  The section on sorcery and ritual magic are smaller, useful but not revolutionary additions.  It also explains how trappings work in more detail than the Explorer's Edition (i.e. specifically how an ice blast differs from a fireball blast) which is adds value.

The spell list has a lot of "repeats" which are already included in the basic rules, so the list of ~60 is much less impressive than it seems. The upside is the Fantasy Companion uses the exact same system as the base rules so slots in seamlessly (compared to the Super Powers Companion whose "powers" work completely differently to the generic magic/psy/weird tech). 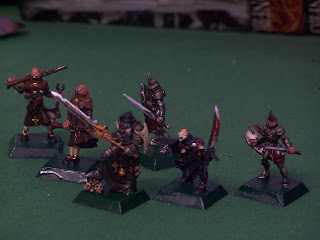 Hmm I feel the urge to dig out and rebase my old Confrontation models...

Perhaps most usefully, each weapon/item/armour piece comes with a $ cost, which would be invaluable if running a Mordhiem-style campaign, and you want to buy/equip your warband between rounds.

This section is very, very comprehensive - with bucketloads of generic examples of magic weapons, potions etc -  more than enough crunch to satisfy the most insatiable tinkerer.  There's even examples of cursed items, and intelligent (self aware) magic relics - like an ensorscelled, possessed blade - which can possess stats and personality of their own.  It looks like great fun, but abandon hope of balance, all ye who enter here. 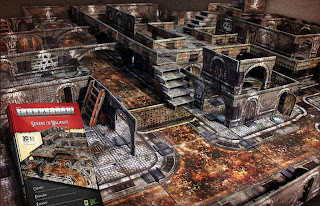 Terraclips are cool and easy to store - but a pain to assemble.  I'm considering making up a table though...
Bestiary
There's a solid amount of choice, from human villains and warriors to monsters of every ilk. I lost count after 40 pages, and I'm guesstimating about ~120 critters.  Lots of new weird beasts as well as all the fantasy favourites.  There's a fair bit of choice even within standard fantasy tropes i.e. trolls come as marsh trolls, sand trolls, or sea trolls as well as the standard version.  You not only have giant spiders, but giant zombie spiders. Golems (yay!) come in grass, stone, lava, straw, metal varities. You get the idea.

TL:DR
I felt that the Sci Fi Companion and the Super Powers Companion were a bit light on - and probably could have been merged into a single supplement.  Not so the Fantasy Companion.  I was impressed with the thoroughness of each section, and I felt the book really added onto the base Savage Worlds core book. An embarrassing amount of treasure, loot and items to "level up" if you want to run a Mordhiem-style campaign, enough beasts, villains and monsters to cover every contingency, and the "alchemy" section was a nice addition.  Quite a few spells in the magic section were repeated, which is my only gripe.  Otherwise, good. This is what I was expecting when I bought the other Companion pdfs.

Recommended? Yes.
If you're interested in fantasy skirmish (RPG or wargame) this is a well worthwhile purchase.
Posted by evilleMonkeigh at 07:05