Although I am not a RPGer (apart from a brief flirtation with FUDGE and GURPS in my teens) I'm a bit of a Savage Worlds fan.  Why? Because it's a rather good skirmish wargame, disguised as a RPG.

In fact, if you brush away all the RPG special rules, you can see it was a wargame - in fact the engine comes from the Great Rail Wars - capable of handling 40-50 miniatures at a time.   Whilst there isn't one skirmish ruleset that works perfectly for all genres, the Explorer's Edition base rules do a creditable attempt to cover fantasy, pulp, horror and sci fi. Remove some of the pulpier game mechanics and it could do grittier historical gaming at a pinch too.

Anyway, since the PDFs were reduced to the only mildly outrageous price of $13, I grabbed the Sci Fi Companion to see if I could adapt anything for my sci fi wargames.  This isn't a proper review as such, more a browse/summary of the rules, with an eye to their usefulness when wargaming.

Characters
Whilst not a watertight competition points system, it obviously has creation rules for "costing" NPCs and characters.  The  36 positive and 13 negative sci fi attributes seemed small for a RPG, but it'd be presumed you'd already own the base Explorer's Edition which has a range of generic attributes.  The sample races might be useful when adapting wargame factions. 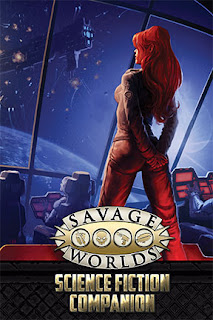 The Sci Fi Companion is decent but not a "must have."  I think it's simply overshadowed by the great value, versatility and depth of the base Explorer's Edition rules.
Gear
There are 33 pieces of gear, from med scanners, psionic shields (tinfoil hat?), camouflage suits and beacons.  There are a range of armour pieces which are useful but not comprehensive for wargaming i.e. more about type (glide suit, space suit, stealth suit) than degree of protection i.e. a +1 to +5 range.

The melee weapons have a decent range but are more about type (energy, vibro) than type (does not distinguish daggers from polearms).  There's a decent selection of ranged weapons, from gyrojets (bolters) to lasers, blasters and plasma weapons. Enough choice to be a Jedi Knight or fight for the Imperium of Mankind.

Cyberware
The maximum amount of cyberware a person can install into himself is limited by his Vigor or Spirit stat.   This cyberware can range from subdermal armour, to vision enhancements, to adrenal boosters or even retractable weapons. Could be a way to "spice up" otherwise vanilla 15mm humans - would be useful.

Power Armour
This comes in light, medium and heavy varieties and can be equipped with a range of equipment and attachments, such as strength, stealth and targeting enhancements, jump packs and more.

Robots
There is a "build your own robot" section where you buy stat and skill increases to a base robot chassis/body, as well as generic warbots, sentrybots and similar.

Starships
You can build and fight a wide range of starships, but the rules are designed with an abstract rather than tabletop combat in mind.  So it could be used for a narrative skirmish, but this won't replace Full Thrust...

Vehicles & Walkers
The vehicles include a range of example motorcycles, cars, and military vehicles (tanks, hover-tanks, APCs, helicopters).   I found the mech section inspiring.  I found myself wondering what tabletop and anime franchises I could convert.  Given vehicles use the same basic mechanics as infantry, it's plausible to use 6mm mechs.  I liked the special rule "death from above" - I wonder where that came from...

There are also generic characters like pirates, psi-knights (Jedi?), scientists, cyborg commandos, smugglers, spies etc.  There are also lots of interesting critters - batspiders or mantis gorillas, anyone? - which sound cool but are useless for wargaming without dedicated miniatures.

TL:DR
A useful toolkit for adapting Savage Worlds to sci fi settings - but not as useful or comprehensive as I hoped.  Perhaps it is simply shown up by the excellence of the base Explorer's Edition, which is a $15 softcover I strongly recommend for value and content. The Sci Fi Companion is generally "OK" with only the mech and cyberware sections catching my interest, and lack of psychic powers was disappointing.  I'd give it a 3 out of 5.  Capable but unspectacular.