Diary of an Average Painter #5: Clearing the Backlog

The "heroic" 28-32mms are almost done; I've got a few more Warmachine and Confrontation models to go but most are repaints or touch ups.  Here's the last day's accomplishments: 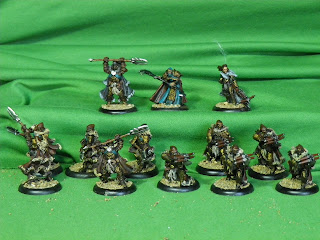 These guys are Circle of Orboros.  Again, I went for quick-and-easy.  They are a little less bright than my usual (I'm going for brighter, more aggressive colours in my "looks good at 4ft" style). As usual I used few colours and even fewer "layers"; a drybrush of their cloaks and a overall brown wash was as complex as it got. Not for me layering a shoulder strap in 5 shades of blue... 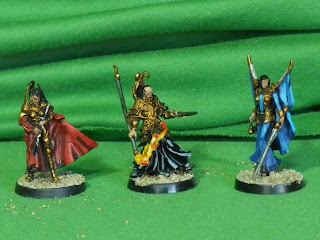 Some Confrontation minis who are going to be wizards/monks alongside my more mundane Perry medieval plastics.  Again, they look rather dodgy if you look up close (click on pics to enlarge images) but the aggressive highlighting on the cloaks looks good at 3-4 feet away. 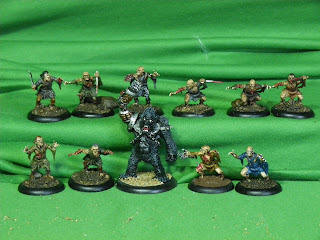 Some Mantic ghouls flank a cyborg gorilla I found when rummaging through a spare parts box.  I'm not sure of its origin - the unlamented AE:WW2 perhaps? 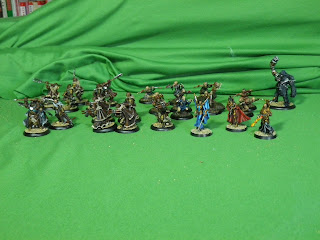 Group shot.  I'm alternating between groups of 10 or so rather uniform models (aka ghouls) so I  feel like I am progressing, and more characterful models - for a bit of fun to break up the repetition.

By accepting lower standards and going for a "just get them on the table" approach I am enjoying painting again and whittling away at my lead mountain.

I'm also putting some models aside for my daughter to learn to paint, as well as boxing up models I am unlikely ever to paint.  I have quite a lot of Confrontation Alahan, Daikinee and Dirz stuff that is a little to fine to scale with my random Warmachine models which I might perhaps trade or sell. 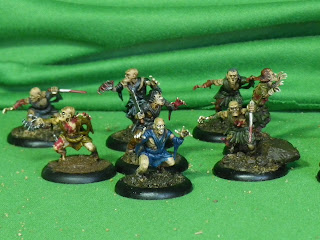 These Mantic ghouls have served me well in the past - they make good antagonists in settings from fantasy, to steampunk, to modern pulp/superhero settings.  I recommend them, in contrast to the rather weedy and oddly scaled skeletons from the same supplier.  I'll have to try their zombies sometime and see how they match up. 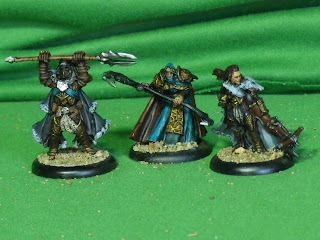 For some reason I really enjoy painting Warmachine stuff, though I dislike the game itself.  I think there is something that appeals to me about their chunky, exaggerated sculpts - they have sort of captured the sense of fun I remember from the early years of Warhammer/40K.  Steampunk robots, gun mages, high-tech elves, undead pirates lead by undead dragons... 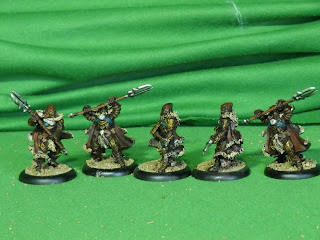 My wife likes the Circle faction. I'm going to supplement these models with some from the Confrontation's celt-like faction (forgot their name, but they have some awesome models - pity I'm so crap at painting skin) as well as using some of my many Wulfen as not-warpwolves.

The mention of two useful boxes (Mantic ghouls, Perry medievals) leads me to my question of the day:

If you were to recommend a box/range of minis to someone, what would it be, and why?

I haven't thought too deeply about it, but off the top of my head, some picks would be:

Perry Medievals (plastic mercenary/WoTR boxes)
Because they are great sculpts, and extremely useful for kit-bashing any fantasy/medieval stuff.

Empress Moderns
Well sculpted. At $3 a pop I felt they were better than the Infinity Ariadneans which sell for $10 each...

Quar
Because they are quirky and awesome. In fact, anything by Zombiesmith falls into this category.  Viking teddies anyone?

All of my picks are aimed at the fairly-cheap-but-useful/good category. Whilst I like, say, Infinity they are expensive and a mongrel to paint; at the other end of the spectrum Wargames Factory zombies are a cheap source of body parts for projects but are rather awkward, repetitive sculpts.

I'm going to toss in a booby prize - the most odd sculpts in my collection are the militia/SWAT guys from Urban War whose proportions make me grind my teeth, followed by the Wargames Factory vikings with their breakable tiny weapons and ill-connecting limbs.
Posted by evilleMonkeigh at 23:51