I found some broken Clix in a box, laying conveniently next to a sprue of Perry medievals.  Voila! 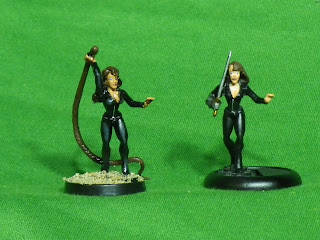 This latex-clad lady had a broken whip arm.  It was replaced with a medieval plated arm, to channel a pulp Witchblade air.  You can imagine her hunting undead or something with her blessed blade. 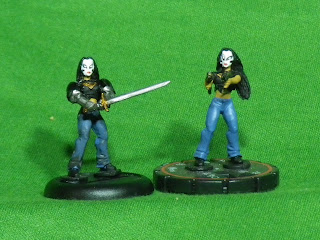 A missing gun - no problem! I chopped off both arms.  The Perry stuff is amazing - the arms just slotted straight on with no adjustments needed.  I might do something about the kabuki mask  as it doesn't go with the medieval sword. 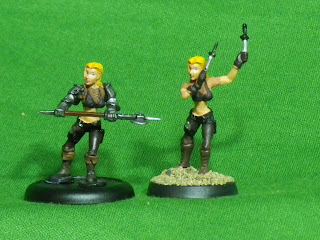 My favourite: a missing throwing knife ended up with both arms removed with the Perry medieval arms just dropping neatly on.  I also had to replace the legs as they were snapped off at the ankle.  She could play in pulp games like the others, but could also slot into a conventional fantasy game as well. 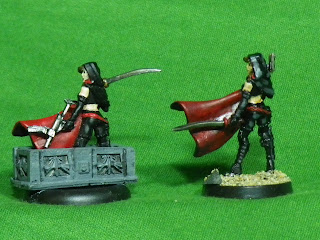 This model had snapped ankles; rather than try repairs, I lazily hid them by sticking her legs into a coffin.  I swapped her sword and replaced the pistol with a Sten gun, so she channels a kinda Bloodrayne vampire-fighting-Nazis.

Obviously these models are not fully "tidied up" but I've been having heaps of fun digging through my boxes looking for broken things to make "table worthy."

I also worked on getting Weird War II stuff based up and painted. 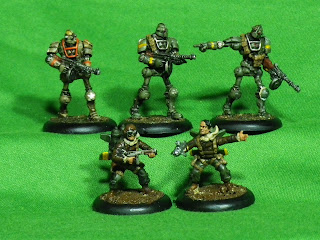 Some of the few AE:WW2 that are not weedy and out-of-scale. 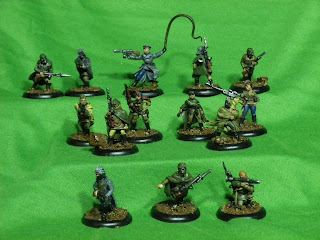 Some Soviet Survivors from West Wind's SOTR line.  Remember the broken whip arm from the first picture? Yeah, I thought the commissar might use it to "encourage" his troops.  The whippings will continue until morale improves, comrades! 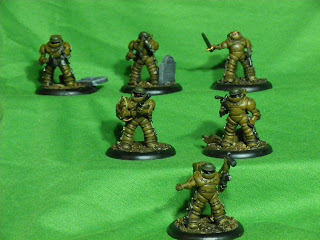 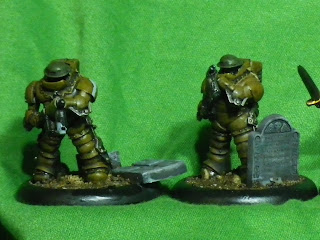 The British use space marines I mean, power armour to fight the Nazi undead hordes.... 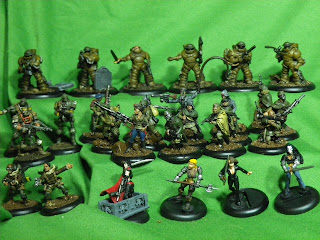 Ever since I decided on the "no new minis in a scale until I paint the old ones" and "tabletop standard not masterwork" policies my painting output has been a consistent two dozen or so a week.

I'm deliberately setting aside time to paint, as I want no unpainted minis.  There's no reason to use the "army of silver and undercoat" - we all have some time to paint (I mean, think of the time the average person spends watching TV) we merely choose to do other things.
Posted by evilleMonkeigh at 03:54