I tend to have an eclectic mix of minis.  I tend to be rather gadfly in my interests: hopping from system to game system and collecting a smattering of everything.  As I never do "big battle" games and tend towards skirmish, my collections tend towards dozens at most, rather than hundreds of models.

But I do have an improbable amount of minis for three game systems: Lord of the Rings (due to a few large eBay purchase when the market was slumped before the latest Hobbit movies I can probably refight Helms Deep at 1:1). Another is Infinity (I love the minis: before the rules got to complicated I actually played it as well - I have hundreds of minis - probably have ~20 from every faction at worst, and 50 or so at best - though how you define worst depends on if you are me or my wife).   The other big collection of minis is Confrontation: I didn't get the huge bargains some did, but most cost 1/2 to 1/3rd of the RRP as the game faded out - the beautiful metals being replaced by pre-painted-puke plastic.  I've never played Confrontation though I have the rules - no one wanted to put effort into a "dead"game (this always annoys me - a wargame is only "dead" when you decide it is - it's not like pewter minis suddenly become incompatible with Windows 10).

Anyway, whilst cleaning my shed I found some minis I haven't touched for 5 years - broken in a box, I rebased them and touched up any missing bit of paint. I resisted the urge to "improve" the paintjob as they were functional and tableworthy: 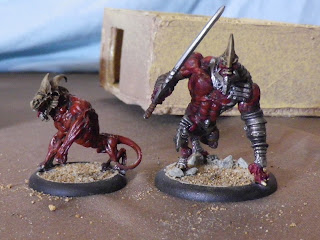 The red flesh paint scheme predates my Orcs by 5 years or so; but it looks similar, though "wetter" and more fleshy. I don't mind the effect but have no idea how I painted it. 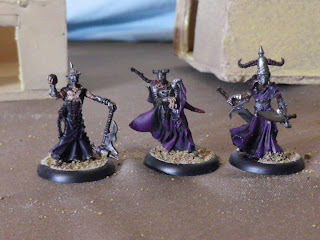 These Alchemists of Dirz could really do with better highlighting and perhaps a bright colour to make them "pop" - red glowy eyes perhaps.  Ah well, they work on the table OK as it is. 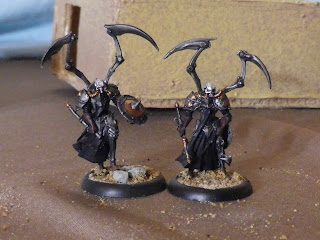 The sinister mantis claws make these my favourite models. 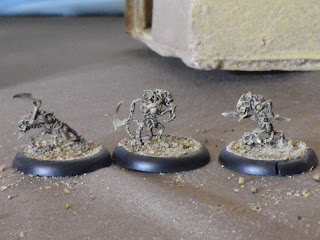 Hmm perhaps I will add some highlighting. Glowy eyes and brighter bone contrasts might be worth the effort. 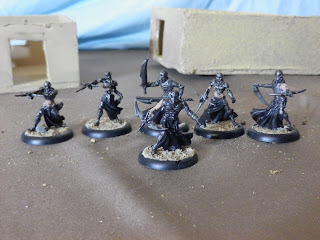 Hmm I probably WILL end up touching these up. A splash of colour will bring them to life a bit more with little effort. 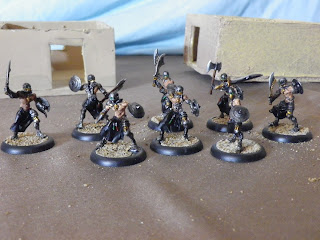 I notice I tend to methodical when I buy random minis: I always have ~10 line infantry, ~10 archers, and then a handful of heroes and monsters - it always looks like a plausible platoon/warband. 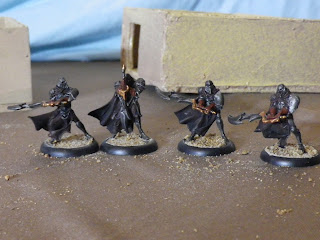 Some "elites" - man I really need to touch up their cloaks at the very least. Hmm I thought I was cool with my old paintjob but even my "get em on the table" approach has limits. Apparently my dull painting style from 5 years ago has cracked even my laid back approach. 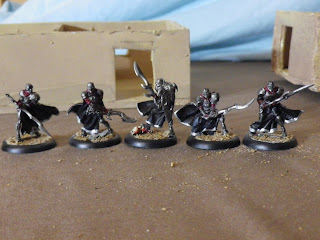 More elites. They are subtley different from the others. Probably should emphasize that with the paint scheme. 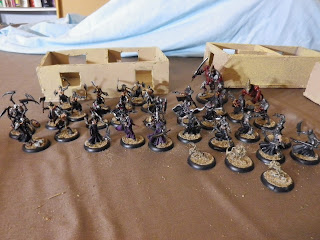 As usual, a decent warband. It doesn't seem that much until you realise I have equal or larger amounts of Alahan, Orcs, Daikinee Elves, Wulfen, Sessairs, and Griffins, plus a whole bunch of miscellaneous character models.  Man, it makes me remember back to what it was like with lots of disposable income (i.e. no children!) 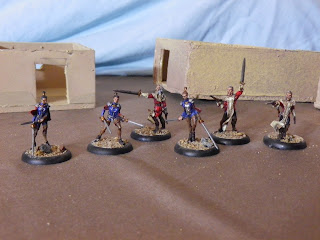 Speaking of other factions, I found these in a box as well. I think they are both Alahan? Anyway, it was a quick half hour to paint the up. The feeling of progress is addictive! Only the Wulven and Sessairs and Daikinee to go...
Posted by evilleMonkeigh at 13:57