Diary of an Average Painter: My Guilty Secret

...I like Warmachine. Yeah, I like the models, and like painting them.  My brain says they are not always the best sculpts (and the Lucky 13th Gun Mages are tragically out of scale) and they are overpriced...

...and never actually play Warmachine. (It's more like a CCG than a wargame; while I respect the honesty of its cheesy overpoweredness and it's so-unbalanced-it's-actually-balanced nature, I have no desire to play it. Also, sniper rifles that go only 15" trigger me somehow)

Whilst I don't know much about the lore (most wargaming lore makes marking Year 10 essays look like fine literature) the absurdity of the factions is just fun! Undead dragons leading zombie pirates and possessed steam powered mech suits? Tick.  Magic-hating techno-elves in anime power armour? Yup, there's that too.   They have  bit of the sense of fun of my Confrontation minis (albeit not quite up to the same sculpting standards)

I think I could probably field proper lists of Cygar, Cryx, Mercenaries and those guys who ripped off Confrontation werewolves - Orboros?

Anyway, a online retailer had these Legion on discount. And who can resist a bunch of mutated elf dragon-cultists who have katanas AND landsharks?  It gives me joy just to type the words. 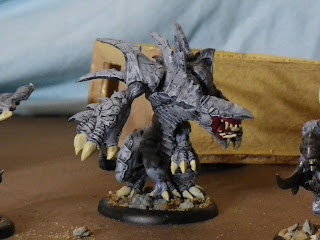 This is the model that made me covet the faction. It was about a third the RRP as the new models were now plastic and it was "obsolete". Insanity.  There's nothing like the heft of half a kilo of pewter. Who'd trade that in for some "finecast" petroleum byproduct. 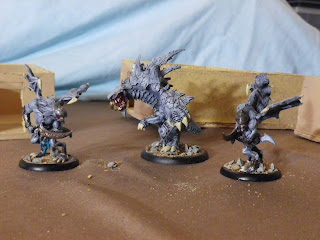 I think I merely drybrushed a few layers of grey, added some red and bone, and called it a day. Who says you need to spend hours on a model?  Honestly, there's no excuse for unpainted minis, besides "I was too lazy/wanted to do something else and couldn't be bothered."  I reckon they took 5 minutes each to do. 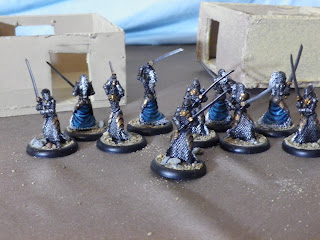 Unconstrained by a need to build a "competitive list" I merely buy the models I like/and or/are on sale. I do usually buy some line troops and some archers, so it seems like a "warband" before I go nuts on heroes or monsters. 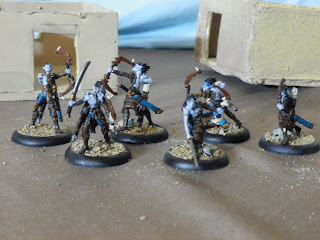 As usual, I spend muuuuch care on the skin. I.e. I paint it, wash it and call it a day.  Painting eyebrows is for mugs! 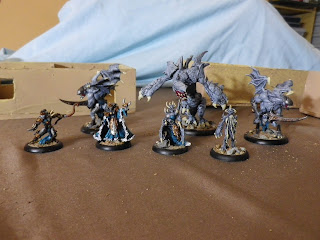 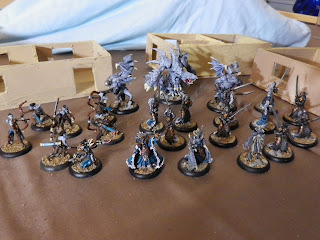 Not a bad little warband. And it painted up in a couple of hours, thanks to my limited colour palette and disdain for "layering" (i.e. painting the same thing 100 times). I reckon effort in painting is diminishing returns after a certain point. 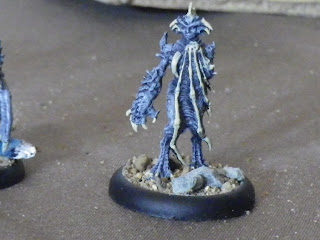 When I said mutated elf dragon cultists, I meant it. Gives "mother of dragons" a new meaning... 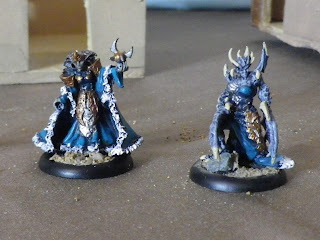 She should have taken the red pill....

I like posting up my "painted only to bare tabletop standard minis" as I always found (for me) the most inspiring minis were from those old (d'Agnostini?) LoTR magazines. Their rather dodgy paintjobs made me think "I could do that!" in fact every time I reread them (I got about 60 issues with binder for $10 from a 2ndhand bookstore) I think "I could do that!" and haul out some minis to paint.  While I admire painters like the Infinity dude (Angel Giraldez?) it just makes me go "wow, that's impossible it makes my efforts look so lame, I couldn't be bothered."  In fact the talented Mr Giraldez is the main reason I have 5 unpainted Infinity factions (est ~$1500 of minis? hope my wife never sees this; sheesh this was obviously BEFORE I had kids) because every time I attempt them I get frustrated and end up giving them the old dip in nailpolish remover...
Posted by evilleMonkeigh at 00:50