I really enjoyed painting my last Dreadball minis, as they provided small, colourful mini-projects easily completed by a busy dad. Also, with the small board set-up, I am more likely to be able to set up and play, with a wife who is more open to boardgames than large-scale wargames.

So - I took advantage of the recent Mantic sale to grab the v2 upgrade pack (rules, cards, etc) and 4 new teams, for $150AUD. 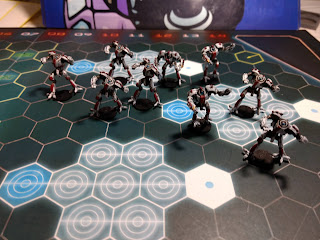 They have a cool mechanic (being able to "transform" between striker-jack-guard) but the Chronium models just look off. They are scawny like Trade Federation droids and just look out of place compared to the other models on the field. I could imagine them as sniper bots or something, but not as brawling Dreadball players. My paintjob probably doesn't do them any favours, but I'd pass on these, with the benefit of hindsight. The Rokkatek team looks much more suited to dishing out some hurt on the field. I painted them in orange-navy to stay bright while giving them a industrial worker look. I suspect this is the v2 box as it came with a "hero" driller unit and cards. They are tough but slow. 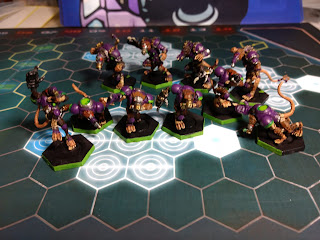 The Skraven Veermyn team is as fast as their Bloodbowl counterparts. However while agile, they are actually not very skilled (rodents are twitchy, with bad depth perception). v2 Dreadball separated skill and agility into different stats, and it allows previously similar teams to have a different feel without leaning too much on special rules - or "extra rules" as I call them. I'm a fan of more stats compared to more special rules, as they both require the same effort to learn, but the stat is universal, giving differentiation to all units, for the same effort. 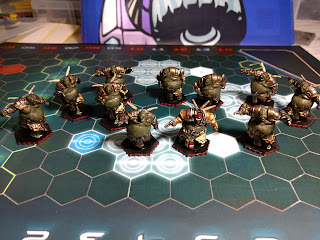 The Matsudo (sumo lizards!) are my favourites. A later sculpt, they came in a single piece and were better cast.  I'm not a huge fan of the new rippled bases - I find them ugly. I see why they did it - it allows them to show the front 180d without painting the base, and you can slot the ball into it.  However - it wasn't "broke" - I always placed the ball on/near the base anyway, and I liked painting the base - it was easy and added a splash of colour to tie the model together. They are slow but strong and surprisingly skillful.


The Rules
Positives
As for the v2 rules themselves, they seem a major improvement on v1. Separating the skill stat into skill + agility has differentiated teams in a low-key way. The main game change I see is jacks are more useful (able to make a full move before a slam, also getting +1 to speed rolls), which is good, as they had seemed a bit underwhelming in v1 compared to the specialist strikers and guards. Many MVPs are now team captains and integrated better into the teams. Even better, the chaotic mess of dozens of teams and supplements being released, each more OP than the last, has been addressed. The teams have been rebalanced and condensed into the main rulebook - a very cool move. Imagine if GW removed all its codexes and supplements and put everything you need into a $50 rulebook!

The rules themselves are far more suited for league play than Bloodbowl, as games go for 40mins or so, not 2 hours.  Bloodbowl has been re-released (and at a reasonable price, compared to most GW stuff) and I looked nostalgically at it...  ...for all of 5mins until I remembered the arcane 1980s rules, long games, meaningless "dead" turns and taking ages to set up teams, moving 5-6 guys just to set up the one guy you actually want to do stuff with, boring cages and the head-banging cruelty of the dice rolls.

Dreadball is more ice-hockey/basketball feel than Bloodbowl's grid iron, so it is not a direct replacement. After a score, the play continues with no annoying re-starts. There are only 6 on the field and every player matters. The mechanics are logical, the same for all actions.  I.e. you usually throw 3 dice, count any above the stat as a success (i.e. a skill 4 humans succeeds on a 4+ on a d6) with natural 6s exploding, allowing extra successes and rolls for those miracle plays. "Modifiers" are simply done by adding or removing dice, i.e. in enemy zone of control, -1 dice.

Each successful dice is counted.   Usually, 0 successes = fail, 1 success = success, 2+ successes is a great success.  For example, the 4-skill human tries to pick up a ball. He rolls 3 dice. If he rolled no 4s or better, he would fail and the ball scatters. If he rolls one 4+, he succeeds and picks it up.  If he rolled two or even three 4+s, he would not only be able to pick it up, but also run/pass/shoot.

It was fun enough mechanic that I am using it for my kids LEGO wars, and the fact Dreadball uses the same dice system consistently means you can pick it up fast/logically predict outcomes without reading every last rule.

Negatives
The only thing I'm not sold on is the card system with enables you to play cards to get game benefits. I know card mechanics are all the rage, and they add a layer of resource management, but I feel they are a bit unneccessary, and I don't enjoy the "gotcha" factor of a card being played unexpectedly to wreck your plans.  I also don't like how guards still cannot pick up the ball. I mean, make them gumby and badly skilled, but to not be able to pick up the ball at all seems gamey and illogical.

Recommended? Yes.
I see the v2 complete box set is cheap ($50USD ish) on eBay and if the new sculpts included are anything like the Matsudo team they will be great. I can warmly recommend Dreadball v2 as a cheap, fast-playing way to get your combat sports fix.
Posted by evilleMonkeigh at 20:15