Well, I'm not up with the terminology (or the new army lists) but I'm digging into my LOTR boxes.  I've often shied away fromgetting stuck in as the task is so immense - I'd easily have 600 plastic models and about 100 metals.

My aim is to quickly paint a box worth of 24 models, and ~6 heroes, each week.  We'll see how this lasts. 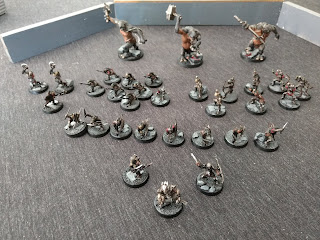 Here's my "24 box + extras" for this week's painting task. If I can get some momentum, I may finally make inroads on my huge LoTR collection.

I can field pretty good forces for Moria, Rohan, Gondor, Isengard - the only niggle to complete other factions is I lack a box of Dwarf warriors and some Easterlings. LOTR was always the cheapest of the GW games, but $70 for 24 is literally double what I recall them being back in the day. Pity my wage hasn't matched the inflation. I told my wife I need to invest in more minis as it seems more reliable than the stock market 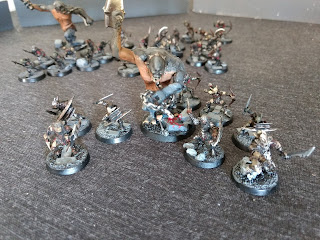 I admit the commanders and the goblin king are not my finest work, but I figure I can touch them up later. At least they are table-ready!

Anyway, first up is Moria - was hastily painted goblins and a goblin king. I should say rather re-painted and rebased - I merely touched up and gave a wash to my older paint jobs. I'd regard myself as a competent painter (a solid C) but man my old stuff was... bad.

After this easy start, I tackled a fun project.  Some cave trolls. The unwanted vikings from my last post donated some dismembered body parts to the bases to make them look more fearsome. 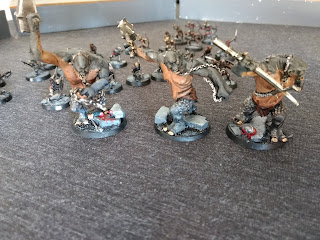 The cave trolls were fun to paint. My daughter approved of the severed appendages but was critical of my implementation: "the sword should have dropped out of his hand if it was ripped off."

I'm going to list the cost of the models in AUD if I was to buy them today, just to make myself feel smug. Note - $10 AUD is about 6 USD/Euros or 5 pounds.

Sheesh, $285 already.  Remind me how GW is now the good guy, again?  When I bought secondhand I had a rule of thumb of 50c max for a plastic and $5 max for a metal mini.  I think the metal trolls were an exception - the priciest at about $15 a piece. 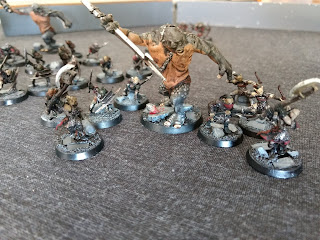 Some goblin prowlers lead a cave troll. I'm not sure if they are OOP now - I probably should have checked they even appear in the new rulebook...
This is not my entire Moria force. I have at least another ~3 dozen gobbos and a slightly-damaged Balrog. But they can wait to another day, as I've done my weekly paint goal. One bite at a time....

I chose this first as I have fond memories of my Moria force. I found the trolls made a great distraction, and the ability of gobbos to scamper over obstacles to be quite powerful in my usual terrain-heavy tables. I'd use a troll or two as a distractingly huge decoy, and use the gobbos ability to rapidly switch sides as the actual main attack to rapidly overwhelm their foes.
Posted by evilleMonkeigh at 07:24