I found a lot of interesting ideas in the pre-dreadnought game Coaling Stations and I think the core rules would transplant well to VSF, giving us better rules than the current contenders (Aeronef and Airships & Sky Pirates). Whilst trying to keep additions to a minimum, here are the changes I would add:

Visibility
Cloud is treated as "heavy fog" to see into/out of at a particular level.

Movement
The maximum air crew can operate without oxygen is about 12,000 feet (2 nautical miles) and it was the average WW1 Zeppelin's ceiling. The Germans found operating over 15,000 feet for long periods caused nausea and blackouts. As WW1 went on Zepplins improved their ceilings to 18,000 and even 24,000 feet and started using compressed oxygen.  Diving helmets and rubber suits were invented in 1837 so you could arguably use higher altitudes.  Airships could move at 100-120kph (60 knots) so you could simply double (or even triple) usual ship class speeds.

Altitude is divided into 6 bands with a micro d6.  If we assume say a 18,000 ft ceiling, each band would be 3,000 feet (half a mile) or 2.5cm/1" in game terms.  This means if a ship is firing at a target 2 levels below it, 5cm is added to the horizontal range.  Climbing or diving one level would not impact speed. 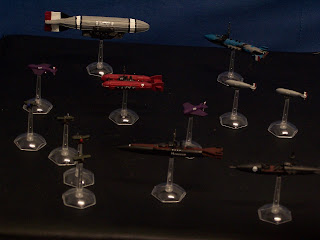 I mostly have "digs" or dirgibles which I wanted for a sky pirate game.  On order are 2 fleets of nefs...


Shooting
I'm not a fan of the Coaling Stations shooting mechanic - which makes bigger guns more likely to hit, but do the same damage as rapid fire small guns.  This would make big 12"+ guns the best weapons for taking out destroyers when in reality they are too slow to traverse and unable to fire rapidly enough at a fast moving, small target.   I've banned heavy batteries from firing at destroyers at all; with light calibre hand-loaded "quickfirers" having the best chance to hit and damage.

With regards to "3D' aerial combat, there would be a "dead zone" above and below ships where the guns cannot elevate or depress far enough.  Pre-dreadnought weapons had about +/- 13-17 degrees, which had improved to +/- 40 degrees by the end of WW1. If you assume +/- 22.5 degrees, then each level below adds 5cm (1 nm) to the "dead zone."  So a ship who wants to fire at another ship 3 levels below must be at least 3nm (15cm) away or its guns cannot depress far enough to hit.... I've ordered some Austrian warships to stand in as my "Germans" ..as the official "German" nefs look the the bastard offspring of a landing barge, a river dredge and a paddle wheeler...
Shooting Modifiers
+1 if firing into/out of cloud (as per smoke)
+1 Any gun over 4.1" firing at destroyer or torpedo-boat sized vessel*
*Only secondary batteries and primary batteries under 6" can engage destroyers. Only quickfiring guns of 4.1" or less can engage them without penalty
Modify rule:  "Evasive Action" - +1 to enemy (and own) firing if protected cruiser or smaller, 4+ save against torpedo hits
I've tried to make destroyers and torpedo boats a little more survivable... For example at one stage in Jutland 12 destroyers closed to point blank (under 3000m) of 10-20 battleships and battlecruisers and only 2 were sunk - due to secondary battery fire. Under most modern rules, you'd be lucky to have two destroyers survive...
Posted by evilleMonkeigh at 07:27