A simple playtest of the rules. 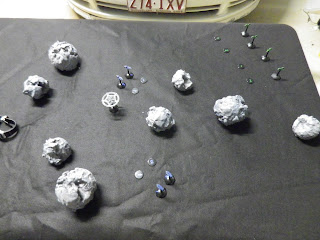 Both sides are moving slowly. The distance each "drift marker" is from its ship shows where the ship will move next turn unless thrust is applied.

Turn 1
Initiative isn't too significant as both sides are out of engagement ranges (defined as the CQ of the ship - 8" in the case of all ships).

The Green forces accelerate towards their objectives. The Blue forces move to block them, accelerating along their vectors too.  The game is playing quite fast. 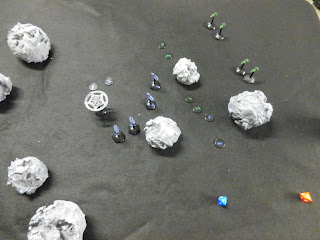 All ships accelerate.  B1 and B2 loop north to stop G3 & G4 from flanking.

Turn 2
This is where things get interesting.  In the "initiative faceoff" G3 & G4 force the northernmost blues to move first, then using full burn (you can see them facing sideways to their direction of travel) they dodge sideways through the gap in the asteroids.  They open fire at long range. As their squadron  mates were decoyed away B3 & B4 will face all the green forces alone.

The greens win the "opposed roll" and fire first.  G4 has its line of sight blocked by an asteroid, so G3 combines all 4 guns (for a +3 modifier).  He needs a 5 (range) + 1 (small target). He rolls a 3 (+3 for "combined battery" modifier), succeeding in doing 1 damage.  However since 5" is the range of laser falloff, the damage is halved to .5 - it does not even scratch the shields

Now the blue forces fire back.  B4 elects to fire all batteries independently. He also needs a "6" and rolls hits of 6, 6 and 9. Even halved, the "9" is enough to score Light Damage on G3, which also damages its laser batteries  B3 now opens fire.  He also fires independently, scoring hits with a '8' and a '0'. The G3 is now in serious trouble, drifting without power with its engines out, and with its fighting ability compromised.

G1 and G2 now come blasting between the asteroids. They elect to engage B3 & B4.  As this is well inside the laser "falloff" range I expect the shooting to be pretty murderous.  The Greens win the opposed roll and shoot first.  G1 scores hits with a 5, 3 and 6, crippling the B4, which has its engines knocked out and many weapons offline. G2 chooses to "combine fire" with a single roll. It comes up an "8" and its target, the B3, is vaporised in a fireball. Kaboom, earth-shattering kaboom!
B4 fires back, but it is -2 due to the repeated attacks and it has had its main batteries damaged by enemy fire.  Its return fire scores only light engine damage on the G2.

The blue centre is giving way, with one ship blown up and another crippled.  It looks like green will push easily through to their objective, the space station.

However, the green frigate's successful attack has brought them in range of the northern frigates B1 & B2.  Blue wins the opposed roll.   It is longer range (4") but B2 scores a 7, 8 and 9 - the successive hits wrecking the G1 and turning it into a debris cloud.    The B1 is less accurate and the G2 deflects most of the fire with its shields. The G2 fires back, but the range means it only "shakes" the crew of the B2 with a non-penetrating hit. 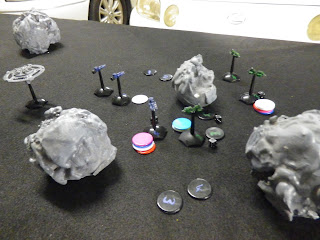 The end of a surprisingly bloody Turn 2.  The counters beside the ships take the place of a SSD - showing hull, weapon, shield and thruster damage.

Turn 3
At this stage the both sides have 50% combat ineffective (crippled or destroyed) so I decide both sides must pass a CQ check or attempt to withdraw. Both sides pass. In addition, the crippled ships (G3 and B4) test individually - both pass and elect to fight on.

In the repair phase, all ships except B4 pass CQ checks to remove "Shaken" counters.  In addition, G3 (who was drifting) regains power and can use half thrust.

The initiative here is important. G2 wins it and forces the crippled B4 to go first, with the intent of "reacting" to it with all 3 surviving ships.  Ironically, B4 wins the "opposed roll" and fires first, causing severe hull damage and utterly destroying G2's main battery and targeting sensors!  G2 now cannot complete its attack run on the satellite this turn as its weapons are inoperative - neither can it attack the B4, which is drifting away towards the board edge and safety.  However B3 and B4 make an "offensive reaction" and B4 rolls two 9s to reduce the B4 to wreckage.

Now, another vital initiative contest.  Blue wins it this time and move its two surviving ships into the rear arc of G3 and G4.  These ships have their vulnerable rear arcs slewed out as they used full burn last turn, and their primary weapon arcs are faced away. 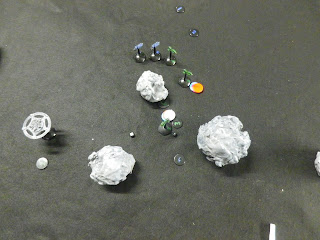 The two green frigates used their rear thrusters to change heading but exposed their vulnerable rear arcs to enemy fire...

Turn 4
The last surviving Green frigate, the G2, accelerates past .5 light and whizzes past the station, taking evasive action from the stations guns, and breaks clear. GAME OVER 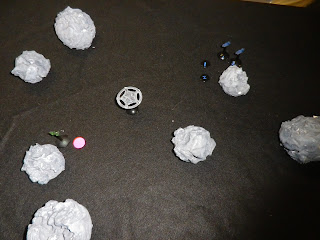 With all weapons knocked out, the last surviving green frigate repairs its engines and runs for home.  The B1 and B2 reverse course but have no hope of catching it...

Thoughts
The battles were extraordinarily bloody.  I feel this was largely due to the fact that bountiful terrain kept speeds under the .5 light (10") +2 modifier.  The frigates ability to thrust 4" ensured they were usually in their optimum (under 5") range.   And except for at the end, no one used the "evasive action" ability which makes agile ships like frigates almost immune to enemy fire and can add up to a +4" range penalty.
The ship who fired first tended to insta-win - I'm definitely going to have to tweak defence values. For a start, the frigates base DF could be raised to 3.  I am concerned about the triple-power battleship guns one-shotting frigates, and I will probably increase the frigate size modifier  to +2" range penalty to make them still harder to hit.
The battle was over by turn 3 - but it was extremely eventful.  Each turn, a ship would be involved in multiple combats.  The turns lasted much longer than I thought, but both sides were constantly involved. Like Infinity and Tomorrow's War, there was no "down time."

The d10 damage system gives more radical results than the multiple d6s in DP9s "Silhouette" system and an unusual number of 8s 9s and 0s rolled exacerbated this. That said, I do like the fact the to-hit, damage and criticals are lumped into one roll.  I probably rolled as many dice for 8 all ships in one turn, as a single cruiser would in Full Thrust.

The counter stacks were not too obstrusive and I really liked them instead of having a ship SSD.  The counters you see, and the ship stats at the top of this post, are the entire record-keeping for the game. That I do like. 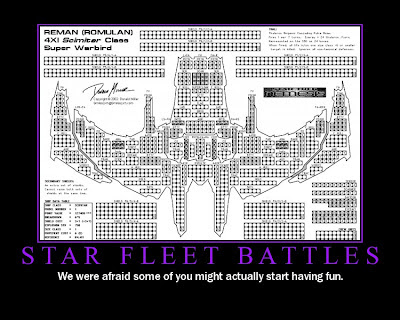 I don't particularly like counters, but it beats the alternative...

Ditching IGOUGO for contested initiative between units worked well, and makes controlling the "initiative" a vital component of the game.  CQ will be very important. The opposed roll worked well, but in this game winning the roll was too important as the side that fired first tended to do so much damage they were immune from return fire.

The game was rather bland, but I want to balance small ships and set a "benchmark."  Too many space games add smaller "escort" or "frigate" size ships as an afterthought. I want to start with them and build up.
Tools of the Trade
Here's what I used to play the game:
Different coloured tiddlywinks from EM4 Miniatures ($1.50 for mixed pack of 40)
Blue = Engine Destroyed
L. Blue = Engine Damaged
Pink = Main Armament Damaged
Purple = Main Armament Destroyed
White = Shaken
Yellow = Light Damage
Orange = Heavy Damage
Red = Crippled
Black = drift marker