Last year I realised I was bored with spaceship games - or more specifically, how even new space games are stuck in the "full Thrust" rut, whilst ground wargames (Tomorrow's War, Infinity, Song of Blades) have shown genuine innovation and tend to focus on gameplay over record keeping. I created a spaceship wargame "manifesto" of what my ideal space game would look like.

There are about 30 posts in which I outline the movement rules, a range of combat/damage rules, muse on campaign systems and ship design

I have made changes to nearly all the ideas outlined in the posts, although movement remains largely the same. I'm going to "review" the rules as they stand currently: 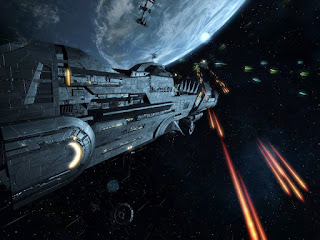 Initiative
IGOUGO is ditched in favour of an opposed die roll between ships or squadrons (based on crew quality).  The winner either activates first OR can choose an opponent (within a certain radius) to activate first.   Along with the predictable paths ships will take, it allows ships with better crews to better manipulate movement and firing opportunities.

Movement
Basically Triplanetary-style movement, with a "destination counter" removing the need for grease pencils and hexes.  It's a simple, quick and elegant way of showing inertia in space "The vis insita, or innate force of matter, is a power of resisting by which every body, as much as in it lies, endeavours to preserve its present state, whether it be of rest or of moving uniformly forward in a straight line." i.e. spaceships will keep the same course and velocity unless they change it by using their thrusters or something else like gravity.

Terrain
The vector movement means you need to plan ahead to navigate past obstacles. Thus a space mat with lots of terrain will avoid the traditional "everyone fly into the middle, park alongside each other and throw lots of dice" of many space games due to trajectories imposed by avoiding terrain hazards.  Terrain effects add interest and tactics (ships hiding in asteroid field; nebulae degrading lasers; a pulsar messing with sensors and small craft, gravity wells allowing unusual maneuvers, etc).

Reactions
Ships can't just "teleport" unscathed past opponents. Any ship that is fired on or has an opponent act within a set range may make an opposed roll to "react" to them.   If the reacting ship passes the success threshold it can act; and the highest scorer from the opposed roll gets to act first.  Each reaction adds a penalty to future reactions; thus a ship reacting to multiple attacks rapidly has its efficiency degraded - a huge battleship can have its defences overloaded by repeated attacks.

Crew Quality
Unlike 99% of space games, crew ability impacts the game significantly. They have different dice types depending on quality.  Average crew use a d8 for "CQ" rolls and have a 8" reaction range.  An elite, heroic crew (think Enterprise, Battlestar Galactica) might use a d12 for rolls and have a 12" reaction range. Better crew can hold the initiative in movement, react to threats more reliably, repair damage faster. 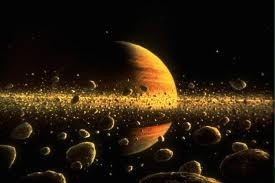 Weaponry
Direct fire is simple - equal or exceed the range with a single roll of the weapon die.  I.e. a laser turret is d10, and needs a "4" or better to hit at 4 inches range.  Relative velocity, and target size and thrust modify this roll. This means small, agile ships are very hard to target. Frigates now actually have a chance of surviving to the end of the game!  A shot that easily surpasses the number required does exponentially more damage; i.e. a roll of "8" where a "4" was needed would do 4 x more damage.  The system has only a single roll to hit and damage speeds up play (with only a single roll) and avoids "buckets of dice" whilst still providing a wide spectrum of results. Weaponry is pretty generic and includes a modest range of kinetic and energy weapons, as well as missiles, mines, drones and fighters.

Damage
The "ship data chart" - usually a page of systems and hitboxes - has been done away with in favour of "damage levels" similar to that seen on movies and TV.
"Shaken" - similar to "suppression" in ground wargames - temporary effects which last a turn
"Light Damage" - minor damage that does not significantly impair the ship's fighting ability
"Heavy Damage" - the ship takes major damage to important systems such as engines and weapons
"Crippled" - the ship is missing big chunks of hull and is wracked with explosions
"Kaboom!" - ship either explodes in a cinematic fashion or breaks up into drifting wreckage

Ships do have a "critical hits"; but instead of an extra roll each hit on a special chart or dozens of system rolls, this is incorporated into the initial weapon roll, and can damage either mobility or weapons in a rather broad manner. 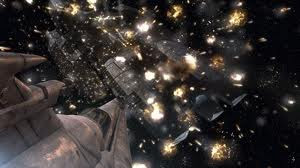 Resource Management
I'd like to add a layer of resource management without complicating matters too much or having to have too many counters messing up the playing surface.  Some ideas:
"Command Points" where you can make extra activations/remove reaction penalties or allow re-rolls
"Orders" like Battlefleet Gothic (crews test to get an extra speed boost, firepower, defence etc)
"Heat Management" a la Battletech (perhaps extra heat = easier to hit/detect like in Lightning Strike)

Detection and Electronic Warfare
I personally don't think you can really "hide" in space, so this has not been a priority area.  However ships would likely be able to decoy or jam their enemies to prevent them from being effectively fired upon.  Besides, "cloaking" has a rich TV and movie heritage.

Campaign Rules
I've outlined a few ideas already, but I want a set of rules that encourages lots of little skirmishes, where going to look for fights is beneficial to the player, rather than everyone "turtling" and building up for a single apocalyptic battle at the end....

Ship Roles, Ship Construction
I want all ships to have specific roles within a fleet. Especially small ships - I don't want them to be simply smaller copies of larger ships (or min-maxed with "glass cannon" builds as "throw away" one-shot weapons). In many space games, escort-sized ships are targeted and quickly wiped out early in the game.

I'd like all ships to have a role - the MMO EvE Online is a great example of this. Large battleships find it almost impossible to catch or engage small, nimble targets.  The smaller ships are not always a direct threat but they might slow them and stop them from escaping, or jam the battleships' weapons.

I'd also like to avoid "kitchen sink" superships with a million different special abilities, to encourage more medium and small ships who have specific abilities. Perhaps each extra system adds an exponential cost - i.e.a "interdictor beam" might add 10% to the cost of a ship, but a second system (say a "recon sensor pod") might add 20%, and a 3rd sytem 40%, and so on....

In Summary
I feel I have achieved many of my goals, though I would have preferred using only d10s and not multiple dice types, and I think the "broad brush" approach to damage may not appeal to everyone (space gamers, like naval gamers, seem to be inveterate rivet-counters).

I'll have to playtest the initiative system more, but it seems to work, and the movement system is solid and has impeccable heritage.  The reaction system owes a lot to Ambush Alley and Infinity and thus is pretty sound.  recording the "reactions" wih a microdice besides the model adds to the clutter but I think it is worth keeping as it allows "sustained pressure" against a more powerful target.

I'm mostly happy with my new damage/combat system (at last!) - a big battleship might need only a single roll of 5-6 dice to resolve ALL hits, damage and criticals.  Whilst I don't like cluttering up my board with counters, I am determined to get rid of the "ship data sheets" with their typical rows of systems and hitboxes: a single counter besides the ship's base seems a small price to pay. I could probably make special "explosion" counters out of cotton wool to make them more aesthetically pleasing anyway.

Crew skill is important but impacts ship fighting ability indirectly. Rather than a big firepower boost, for example, good crews can react faster and more reliably, hold up better in sustained combat, and can get back into action quickly after damage.

Anyway, this is just a reminder of where I am at. I'm aiming to get a set of test rules out sometime in the next month, for people to experiment with.
Posted by evilleMonkeigh at 22:54