This game system (and its various permutations) has been sitting atop the Wargames Vault bestsellers for a while, so I thought I'd check it out. This is the "basic"system based on modern warfare, but there already are a swarm of supplements.

The Shiny:
There isn't any. My $5 pdf is easy enough to read but looks like it was written in MS Word. In fact the whole rules are pretty brief - so much so I was a bit concerned lest I accidentally publish the complete rules system when reviewing it.

5Core has some interesting ideas with regards to action and weapons fire. It will appeal to the minimalist Song of Blades crowd and is great for getting minis on the table for a quick game.

Gameplay:
Each player takes a turn.  However, there is a twist - a d6 is rolled before you activate any of your minis.  A "1" (Scurry) means your forces can move and not fire; however they are immune to overwatch fire.  On a "6" (Firefight) your forces can fire but not move.  A 2-5 means you have a normal move -  you can activate 2 of your minis (or 3 minis if you are using a big squad of  8+) and move/fire.

Movement is the usual 6" and can be impeded by the usual rough/difficult ground and obstacles.

Combat
Players roll two sorts of dice - a Shock dice and a Kill dice.  Again the key rolls are "1" and "6". On Kill dice 1s and 6s knock down or take targets out of action.  On Shock dice targets can flinch (take cover) or bail (flee).  Minis who have not fired in their last turn can react and put down suppressive fire (Shock dice only) on targets that move into LoS.

Melee is simply both roll d6, highest wins and knocks out their enemy (with a few simple modifiers).

Weapons & Equipment
Normal modern weapons - from assault rifles, pistols, grenades, sniper rifles and LMGs etc - are all covered. Short range weapons like pistols and SMGs fire 12" - the rest work to LoS.  The guns have some good "character" that fits their role well - a LMG can fire lots of Shock dice in a suppressive role.  Sniper rifles get extra Kill dice and cause friendlies near the target to flinch. 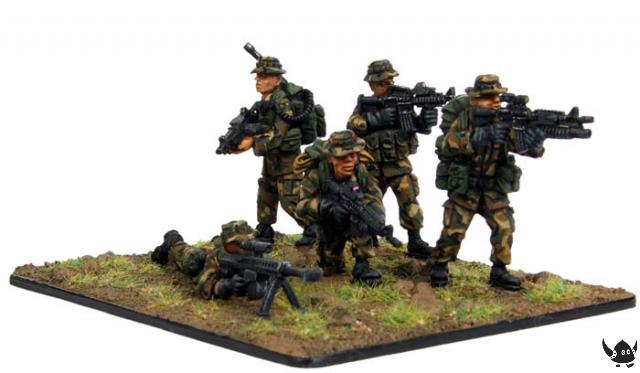 5Core's basic system is aimed at modern warfare, but lack of troop quality is an issue for me.  Eureka has some great modern figures - here are some USMC models from their gallery.
Extra Rules
There are extra rules for “unusual situations” such as info gathering and searching for items)such as weapons caches) . Completing tasks uses the same 1-and-6 system – a ‘1’ delays, and a ‘6’ means someone else has to try.  There is rules for calling in indirect fire, and some welcome solo gaming guidelines – again there is a simple dice system and troops can dig in or push forward recklessly.
I do like the rules for advancement and casualties – troops can miss games or die outrigjht, and there are about 20 skills that give simple boosts or extra dice when shooting, moving etc.


TL:DR
The aim was for a simple game, with no stats at all (not stats can be good or bad, depending on how you view it) and plenty of unpredictably. It has interesting activation and weapon mechanics.   It was to be a skeleton system to hang campaigns and create stories. I think the game designer has achieved his goals quite well. The popular rules-lite Song of Blades engine falls down in “shooty” settings so 5Core fills this gap nicely.  This is a game where you can jump straight in and get playing and would make a great introductory game for friends – it’s super easy to learn and you only need a 2x2 or 4x4ft table and a handful of minis each side.

Recommended: If you liked the minimalist approach of Song of Blades and don't mind paying for a somewhat bare bone ruleset with minimal production values, then yes. It's quite a nifty little system, and I think it will gain a cult following amongst a certain type of gamer.

Personally, there are a few things have me holding back my enthusiasm:
#1.  the system itself is so short it should be simply be included within any "setting" or "campaign" it came with rather than sold separately.  It's just a Word doc.
#2. I think troop skill/training is very important, and the rules do not reflect this enough
#3. I'm not a fan of using a squillion special rules/traits/abilities just because the designer was trying to be trendy and eschew stats.  I think it's false economy - it's actually easier to remember 3-5 stats universal to everyone, than the extra 80 special rules you need to do the same job i.e. differentiate between the minis. No, there isn't 80 special rules... yet - but I'd put 10:1 odds on the "supplements" adding bucketloads.

EDIT: I've just obtained the 5 Parasecs from Home sci fi supplement, so we'll see if this addresses any issues I have... stay posted for a follow-up review... and here it is.
Posted by evilleMonkeigh at 02:34