Ariadna are one of my favourite Infinity factions, with their Scottish-Soviet-French aesthetic, low tech weapons, and werewolf soldiers.

Here are some I speedpainted last night - I'm getting ready for the Infinity v3 rules.

All I know about them is the fluff (art book) is separate from the rule book, with I totally approve of.  I hope the rules will be written better (the old ones were a tad confusing, awkwardly translated from Spanish) and having all the rules in one book (instead of three) will be nice.  It's too late for them to "unmake" the million weapons and special abilities that have increasingly cluttered the game since the Human Sphere and Paradiso expansions, but maybe now I won't need to run inside to check the online wiki every 5 minutes. 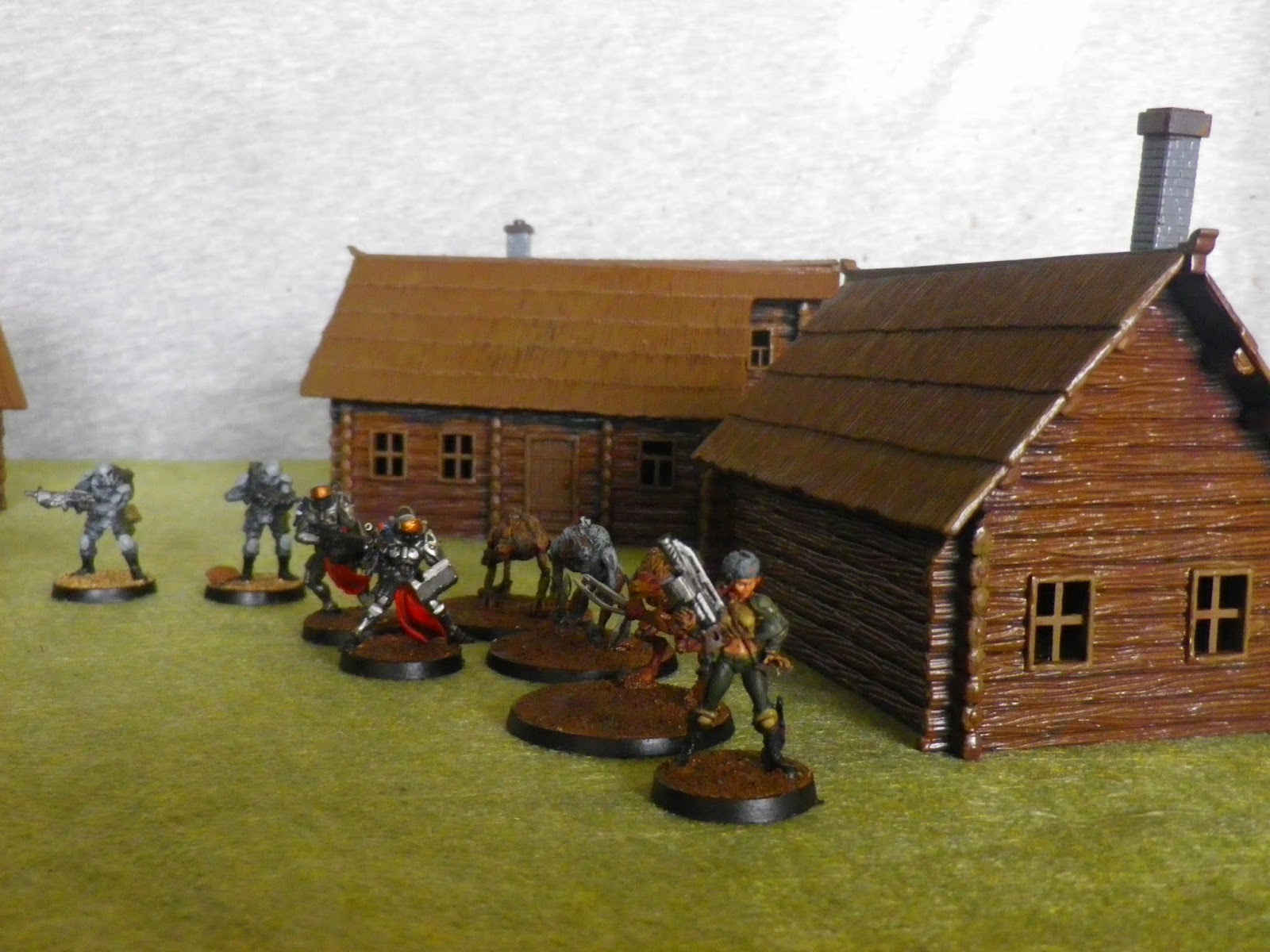 I know "speedpaint" and "Infinity"are not often uttered in the same breath, but damn, the fiddly models irritate me. Wonderful dynamism, and amazing but such faint, unpaintable detail. I figured slap some paint on them and get them on the table at least, then "pretty em up" if I use the faction regularly.

Also in the pictures are some 1:72 Pegasus log cabins.  Hastily sprayed with a can of mission brown, I'm leery of showing them prominently, but I hope you will see how well they fit 28mm miniatures. At $15 for a single large cabin or 2 smalls, they make a decent hamlet for $45, and will see duty in my upcoming French-Indian war project. 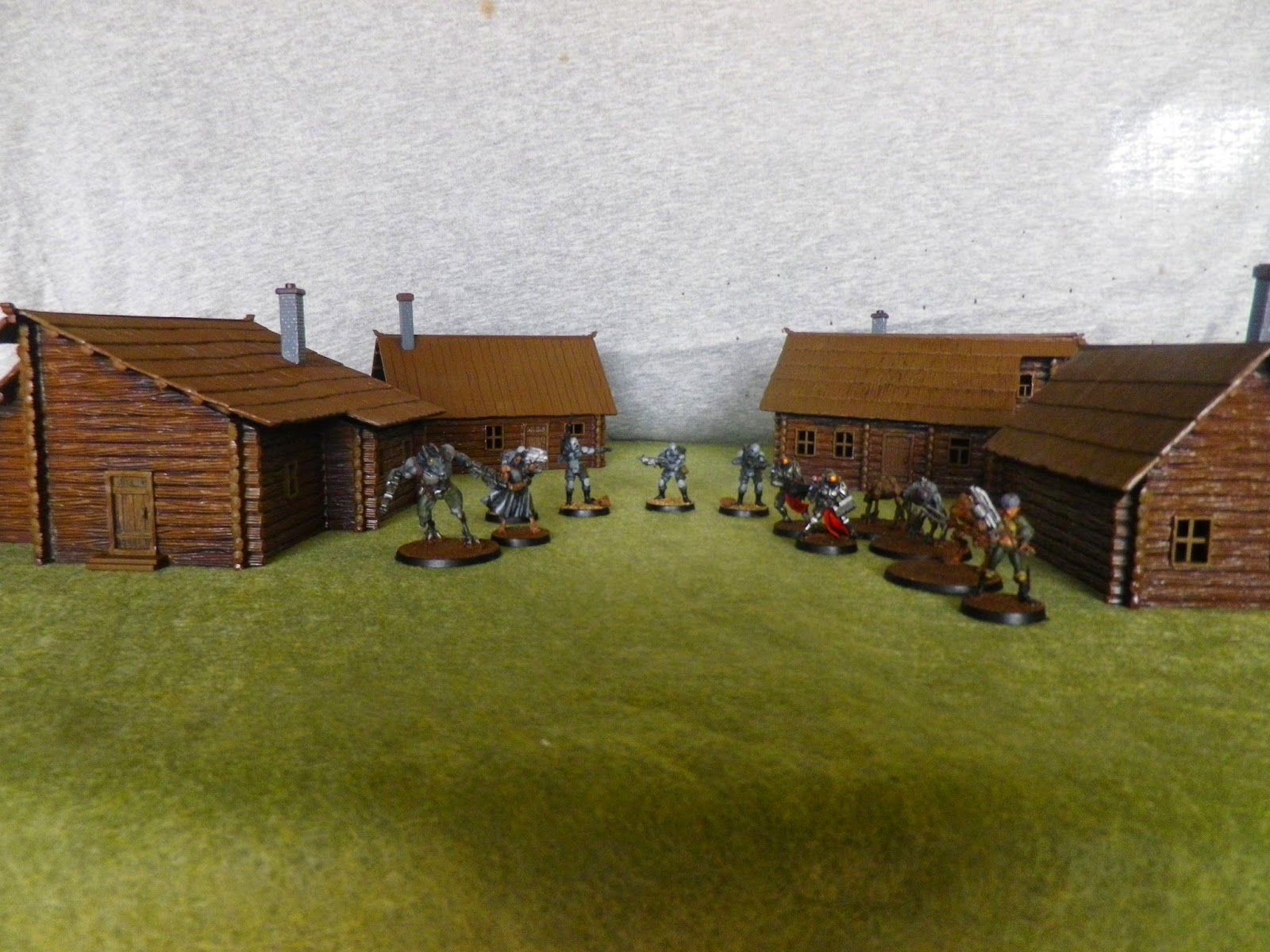 At tabletop distances the 1:72 cabins look fine with 28mm minis. 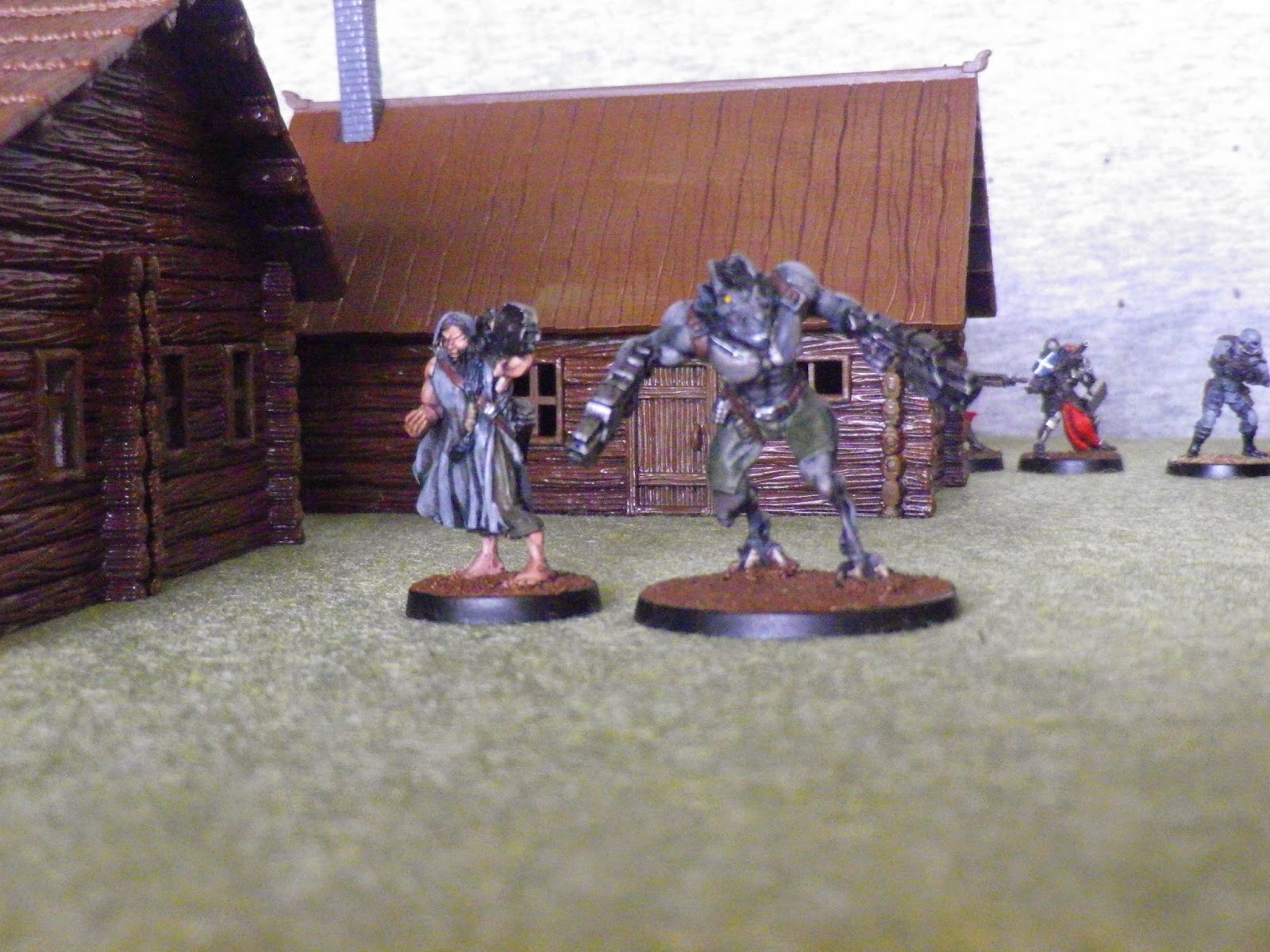 The werewolf dog-warriors (seen here in human and wolf form) are lame compared to the awesome new resculpts, but I got them on a stock clearance special. 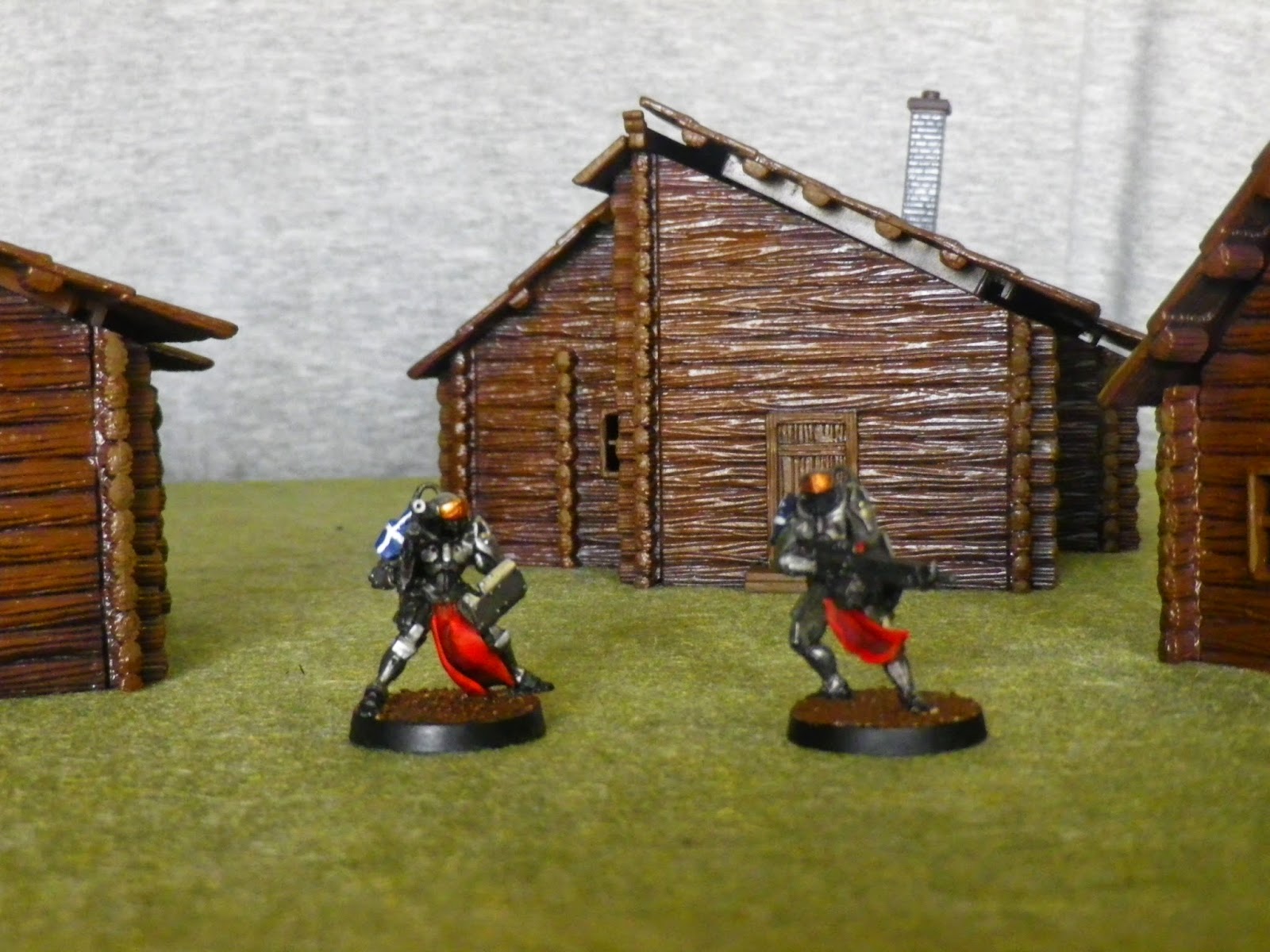 Scottish Mormaer heavy infantry.  Infinity troops traditionally never have metallic armour, but I'm leaning towards it for my next faction. 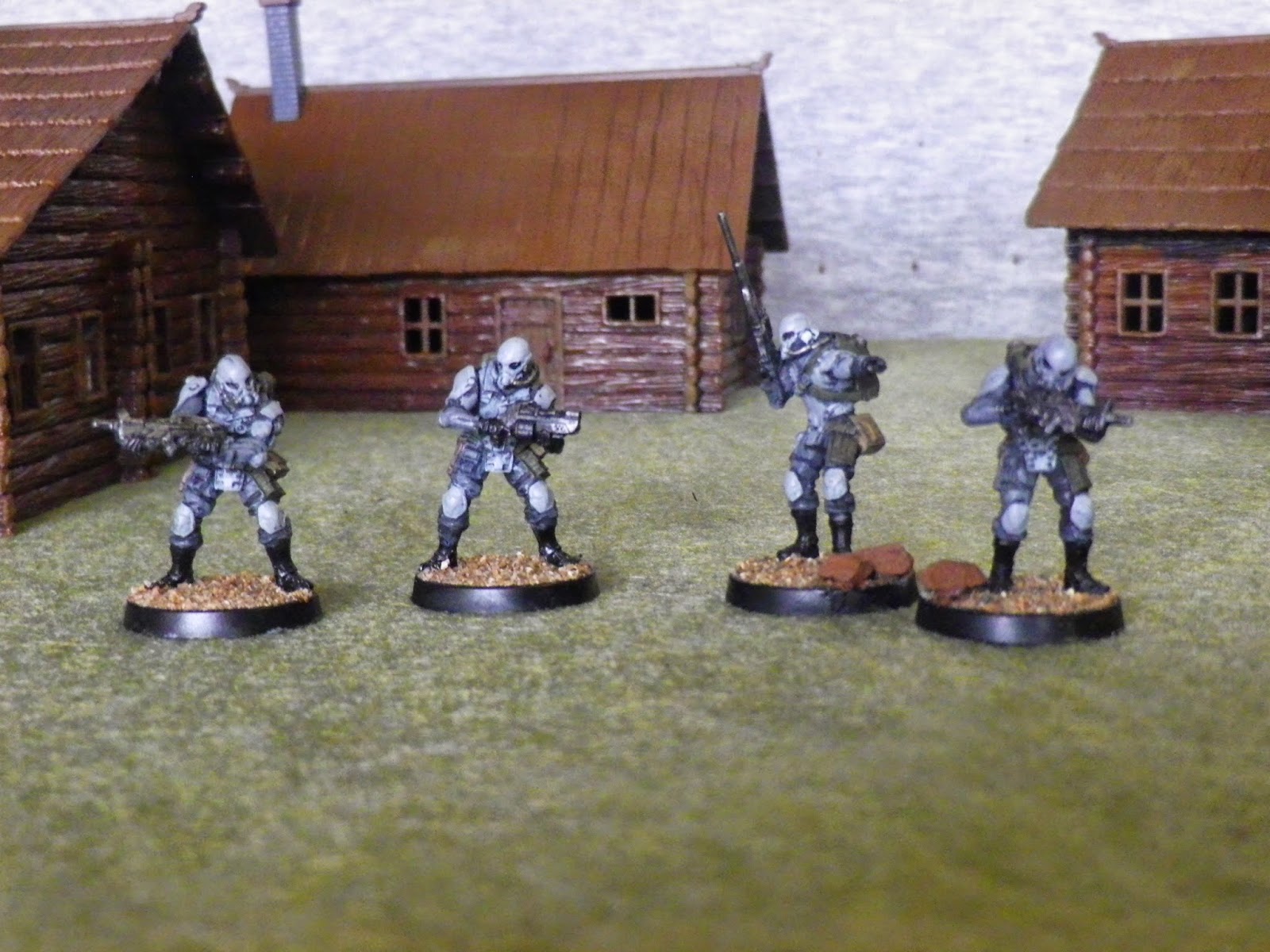 Some Kaplan Tactical Services mercs channeling a stormtrooper vibe.  They are intended to help out my upcoming Qapi Khalqi sectorial.  Along with the Druze, they can be used to bulk out a range of factions.

Next up, a Nomad sectorial, then probably some less frustrating minis for a change - I''m eyeing off my Perry War of the Roses plastics (lovely miniatures) and Warlord Greeks (new and shiny arrived in the mail.)