Due to the imminent arrival of our first child, I am starting a bunch more new projects and collecting models in preparation for the lean times ahead. Make hay while the sun shines...

One of these projects was aeronef - I have lots of dirgibles from Brigade for my abortive attempt at a Crimson Skies game but no actual "flying battleships" per se.

Brigade sculpts are solid and simple. This is a benefit - unlike fine fiddly sculpts like Infinity, they are both easy and rewarding to paint.  When VAT is removed for non-UK buyers, it pretty much covers postage, keeping prices reasonable. The sculpts had little flash or mold lines and required very little clean up.

The Austrian Navy is my proxy "German" fleet. The actual German fleet being quite ugly with a square river barge/dredge look quite unlike the VSF aerial battleship I would expect. I feel there are some aeronef fleets which are quite staggeringly ugly - the "oval" Scandinavian Federation, the "saucer-ship" Russians, and the "square" Germans and Japanese.  I think Brigade is trying for a range of different "looks" but they need to make ships people want to actually buy, for goodness sake... Brigade tries too hard to be different with some of its ships...

I think the British are along with the French and Italians, among the more "conventional" aeronefs (if there is such a thing). They have ship-like lines and bristle with guns, pre-dreadnought style 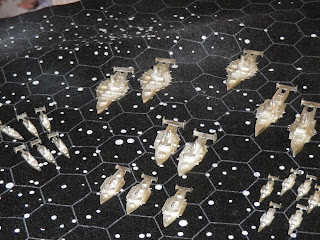 The British have a pre-dreadnought feel, and I will definitely be adding some lookout "masts" (though I am dubious how they actually help a flying battleship) 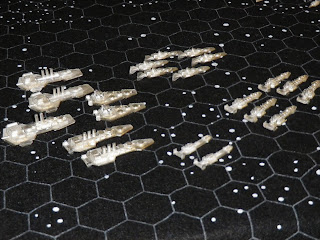 The Austrian escorts are excellent sculpts  but they are much larger than their British counterparts which is a bit jarring on the table.

Finally I bought some freighters to escort and raid.  There will provide the basis for scenarios. I particularly like the Austrian liner which shares features with its warship cousins giving it a distinctly national design feel. 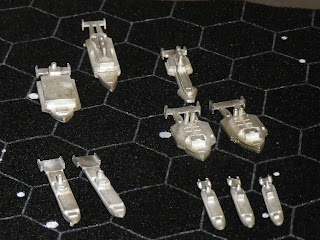 A rogues gallery of merchant ships.... there may be a Q-ship amongst them...

I photographed the models on a HotzMat star mat (you remember - the one that didn't arrive for 6 months). If you compare it to the MKP mat it is visually superior as it has much fainter hex lines which are less jarring. Material is better quality, too, for the same price. The stars painted on are a bit underwhelming, and don't differ much from the MKP "paint spatters." Verdict:  Hotz Mat > MKP Mat - but omly if you are willing to risk waiting 6 months without replies to messages vs prompt customer service and communication. 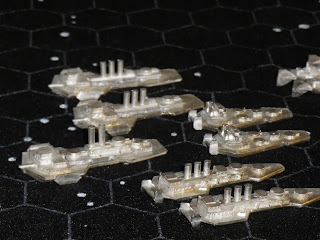 Anyway - on to the painting stage (after a few zillion radio masts attached and a lot of curse words later, I'm sure...)
Posted by evilleMonkeigh at 01:24