Whilst looking for a good aeronef/flying battleship game I have been digging through naval rules to see what is worth converting.

An obvious contender is General Quarters, so long the benchmark in naval gaming. Whilst the original GQ were revolutionary in how they simplified and abstracted naval warfare, in a way both playable and realistic, I feel General Quarters 3 has swung the pendulum back too far in the direction of complexity and "rivet counting" with extra hitboxes and hit locations, and salvoes swapped for individual weapon mounts.

So are there any naval games out there that emphasize playability and the ability to handle decent numbers of ships?  Naval Thunder is a little simpler in its mechanics, but I feel less accurate and comes with plenty of book-keeping and hitboxes (I'm talking 100+ hull points for battleships).  No advantage there.

So I tried a lesser-known title. Battlestations! promises "streamlined intuitive game system with a focus on tactics rather than minutiae" and "handle 30 ships in under 3 hours" and "markers to eliminate the necessity of book-keeping."  Sold!

I was seduced by promises of "less book-keeping"

The Shiny
Battlestations! is rather old school in its layout with rather small unfriendly font and only a smattering of photos and illustrations.  B&W with a colour softcover, it has the SFB-style layout, with dense wall of text and small, tight font.  However it does supply all the cardboard tokens and markers you need to play which is an old-school touch I do appreciate. There are not only quick-reference charts in the back of the book, but they are even duplicated in cardstock. No photocopying required. Of 81 pages, the rules take only 21.

Players dice for initiative (+/- fleet commander ratings) to determine move order which is IGOUGO.
Random weather is rolled for, and players can roll to detect opponents. Radar helps of course.

Ships can change speed modes by one level (i.e. slow to medium) per turn, and there are rules for reversing, collisions, ramming and running aground.  Turn templates are provided. Weather can impact movement - for example smaller ships labour in heavy seas. There are submarine rules (subs can travel underwater at 4 depth levels).

Movement is pretty standard, but firing and damage is quite different.  Weapon penetration and armour levels (both rated A-E) are compared; gun may only attack targets 1 level higher than themselves.

Overall "attack" and "defence" scores are compared, rather like General Quarters.  This is referenced on a chart and a d20 roll is made.  Torpedo rules are likewise pretty simple.

Shots can miss, do a single "damage level" (of which a ship has four) or do a critical which could do 2-4 levels or automatically sink the ship. 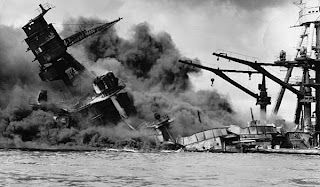 Damage is abstracted in Battlestations! into four rather commonsense levels.

Damage can exceed level 4 - as Damage Repair is quite powerful.  A ship could recover multiple "levels" in a turn - but any damage remaining after the Damage Repair Phase is permanent. It's kinda a weird mechanic but it works.  I.e. a cruiser takes 5 hits, but then "repairs" two, thus having L3 permanent damage take effect.

There are full air combat rules (for air to air, surface attack, and anti-air) including picket ship AA.  Submarine rules include squids/hedgehogs, X craft and mini subs.  There is provision for laying and sweeping  mine, and coastal shore batteries. Escorts can lay smoke within certain limits.

Unusually for a naval game, there is a morale system which takes into account national traits.  A fleet that takes too much damage will break off and retreat.  There are rule for formations such as divisions, squadrons and flotillas - ships are not forced to stay in formation - but ships in formation are rewarded by a combat modifier. Like their historic counterparts, the morale break-off levels mean Italian forces are also risk-adverse in the game

Other Stuff
Like General Quarters, there is a huge bibliography that infers the author did his homework, and a set of design notes.  The design focus of the game is being able to handle more than 4+ ships per side (which is the point most other games bog down, and book-keeping overtakes tactics and maneuver as the prime focus); streamlining without losing period flavour. That players should be admirals, not mathematicians. It is also the aim of the rules that light ships will be more survivable (as they were historically) and fleets not "deathmatch" to "the last ship standing."

There is also a commentary on national navies, and a list of 11 scenarios from 1939 River Plate to 1944 in Surigao Stait.  There are fleet lists - and I must say I like how all the ship data fits on a single line, i.e.

You can see your whole fleet at a glance, and any recording can be done by markers on the game board itself. 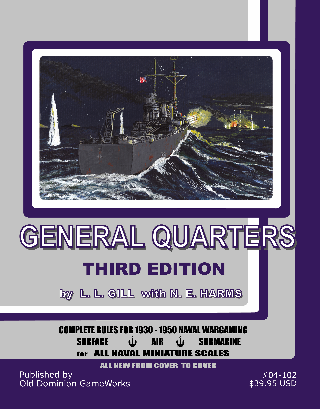 With the pricey GQ3's increased complexity departing from the cheap abstract simplicity of the old GQ1 and 2 booklets, there is definitely a place on the shelf for Battlestations!
TL:DR
The game sets out with a clear design aim, which it successfully accomplishes. Faster and slicker than the "old" GQ 1 & 2, it does away with book-keeping entirely in favour of tabletop markers.

A myriad of hitboxes and criticals are eschewed in favour of four generic damage levels. The ability to repair multiple levels within a turn was a bit jarring but it balances out with regards to gameplay.

Battlestations! is very simple, but still takes into consideration concepts covered in more complex games, simply in a more streamlined way, sans the math and book-keeping.  Using a d20 allows combat to be resolved with a single roll, streamlining the old GQ "fire-by-battery" process still further; light years from the dice chugging of Naval Thunder or GQ3, which fire individual mounts.

Traditional naval gaming "rivet counters" may find Battlestations! bland, but if you want to use more than a half dozen ships (and want to finish in a reasonable amount of time) then this may just be the ruleset you are looking for. The focus is on streamlined play, tactics and maneuver, not record keeping.  However, the "broad brush" approach to damage means you won't know if that 3" shell knocked over the captain's coffee pot, or if the left bridge wing Oerlikon is knocked out.

Due to GQ3 becoming more complex, Battlestations! fast play focus makes it more a complementary rather than a competing ruleset.

Recomended: Definitely. I can see it won't be to everyone's taste - but not only is it the only naval game I know that actually is aimed at allowing 20+ ships per side, but it would naturally handle a "typical" game of 8-12 ships per side a lot smoother and faster than its rivals. I can see myself adapting the d20 4-tier damage system for big VSF aeronef battles, to boot.
Posted by evilleMonkeigh at 05:50