Modern naval wargames bore me.  Not that they are all overcomplicated - for example "Shipwreck" is a pretty good game that covers all the key areas without tedious rivet counting.

But it's the scale and speeds involved that turns me off.  The vast ranges involved make maneuver almost redundant. I could pretty much play a modern naval game without miniatures at all.  When your 30-knot destroyer is pretty much motionless relative to a 450-knot missile, which can accurately range beyond 60 miles, it's evident that "maneuver" very much takes a back seat to spotting and shooting. Most of the time a player's most exciting decision is "do I turn on my active radar or not."

However fast attack craft are a different story.  They tend to be employed in coastal waters where over-the-horizon attacks are uncommon.  They also tend to be often in action - small patrol boats and fast attack craft are involved in the majority of post-WW2 surface actions - numerous North/South Korean gunboat clashes (1st Battle of Yeonpyeong, 2nd Battle of Yeonpyeong, )
the Iran-Iraq war, the Indo-Pakistan Wars (Operation Trident, and Operation Python) and the Middle Easy (Latakia and Baltim) as well as China vs North Korea's corvette gun battle in the 1974 Battle of Hoang Sa)

I noticed that very few involved aircraft, and all FAC battles were in visual range (The 1st Battle of Yeonpyeong started with gunboats "bumping" each other!) with maximum ranges of 15-20 miles for missile fire. In most cases,  close range automatic gunfire was the main weapon. Very few post-WW2 surface battles involved more than one or two small corvettes or frigates - in fact the majority of combatants were usually - you guessed it - fast attack craft under 250 tons.  And interestingly enough, there is a set of rules aimed specifically at these modern fast attack craft. 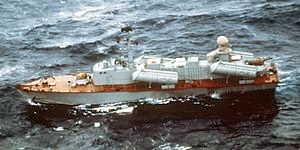 The "Osa" class and its variants have probably seen more action than any other post-war vessel.  The Indian variants sank most of the Pakistani navy...  ..and the Israelis sank a bunch of them in the Middle East...

...is a 38-page black and white pdf. The rules themselves are only 21 pages. The other 17 is a rather thorough list of various missiles, bombs, guns, helicopters, aircraft and ships. There is a thorough index but no "quick reference" sheet. The pdf is plain text throughout - no "bells and whistles" here.

Stats & Ship Data Cards
Ships can have different crew quality - and each side has an overall command quality - which modifies dice rolls.  Ship "data" is not too complicated...

...and can be recorded rather easily compared to most naval games.


Initiative/Play Sequence
Ships roll a d6 (adjusted for command quality) and leave it beside the model. This determines the order for moving and firing.   The sequence of play goes:

A "Sa'ar" missile boat firing a Gabriel
(source: Zahal.org)
Movement
Vessels can travel at speeds from creep (5cm) to very fast (30cm) - which is 40kts+. Speeds can only be changed by 2 levels per turn so you'll need someway to record this. Turning is similar to many aircraft games - you must move x amount of distance before you can perform a 60d turn.  There are rules for collisions, drifting, running aground and towing.

Detection
Undetected ships can be replaced with two counters ("blips") - one can be a dummy.  Blips can only make spotting attempts if they are revealed to be a real ship, at which point they are replaced with a different marker and become a "contact."  One other dummy counter must be removed. Contacts may make spotting attempts, but may not fire.  In order to fire, the contact must be replaced by a model on the table (thus becoming a target itself.)  Blips and contacts can move like the ships they represent.

Extreme radar detection range is about 110cm for a "Osa" in normal circumstances.  This can increase or decrease significantly based on circumstances.  At up to half range, detection is automatic - beyond that, a dice roll must be made.   Ships using passive ESM can detect ships using active radar at greater distances, but may not attack unless they have very advanced radar.  Visual spotting is much closer - about 60cm but can be drastically modified by weather or darkness.

Countermeasures & Decoys
These offer a d6 "saving throw" against missile types they are designed to defeat.

Weapons Fire
These must exceed a "target number" on a d20. There is quite a lot of modifiers for both guns and missiles - you'd need the chart to remember them all. "Snap fire" allows missiles to be fired earlier in the turn sequence but they have a significant negative modifier.

Torpedoes and missile fire are resolved in the following turn (torpedoes can "run" for several turns) which necessitates recording their targets in some way. Usually ships can only fire one at a time which means the board should not get too cluttered.

With an average 40-57mm automatic gun reaching to 30cm,  and missiles having a minimum range (30-75cm for a Styx SS-N-2, for example) maneuver is quite important, and with most boats having a 25cm+ top speed it is quite easy to close or open the range. Yay! Sea Tiger insurgents - fought against the Sri Lankan navy in armed speedboats.
"Bulldogs Away" allows even small armed whalers and jetskis to be included

Damage
Hits roll 2 d10 - one for the "damage level" (or structural integrity) which ranges from intact, to damaged-heavily damaged-wrecked-sunk. Each level impacts on speed and maneuverability.
Damaging hits cause a roll to be made for each ship system to see if it is knocked out.  The other d10 shows "special hits" or "criticals" such as power loss or fires.

This is a pretty restrained system compared to the usual naval wargames rivet-counting and works fine given the small number of ships (no more than a dozen) involved in the "average" fight.

Aircraft & Helicopters
These get two "movement phases" although aircraft maneuver is pretty limited on the battlefield and there are rules for air to surface and surface to air combat.

Miscellaneous Rules
There are rules for more unconventional craft such as hovercraft, hydrofoils and "ground effect" craft.  Others include mines and minesweeping as well as landing forces and shore bombardment - both of which would come in handy for scenarios. Since FAC doctrine emphasizes combat amongst islands and cluttered terrain, there is a random "terrain generator" for those who need inspiration in setting up a table.

The Italian "Sparviero" hydrofoils seem ridiculously heavily armed for their size. Can't help imagining what would happen if they took a hit and "crashed" off their foils at high speed. Well, Bulldogs Away covers that eventuality....

TL:DR
+ Has all important details, but avoids the heavy rivet-counting that plagues many naval games
+ Maneuver, firing and spotting is "balanced" and fun compared to "normal" modern naval games
+ Focus on ships that actually fought numerous post-War battles as opposed to Cold War "what ifs"
+ Extensive ship and equipment lists
+ Straightforward detection rules allow for a bit of "hide and seek"

- quite a few modifiers, no QRS (perhaps one is available on a yahoo group?)
- need to track speed, missiles & torpedoes fired, and each ship's initiative either clutters the board or is annoying to have to record

Recommended?: Well, the rules themselves, yes.
My main issue personally, is that modern naval FAC miniatures are a niche within a niche, so you have limited choice within scales. At 1:700 you have PT Dockyard and Skytrex but I object to paying $8+ for single small model, for a game where I know I'll have to buy both forces.   At smaller scales you have  1:1200 North Head (Shapeways, and as expensive as 1:700), 1:3000 Denian (there is no website but you can see the catalogue via yahoo groups) and 1:2400 Viking Forge (no option for online payment - send a cheque? Really?) There are various Shapeways options if you hunt around, but none are reasonably priced. All the ranges are rather sketchy and incomplete - and the one range that is likely to expand - PT Dockyard - lacks modern support ships (merchants, etc) in 1:700.

In short - good rules, cool battles - but limited model choices are a major drawback.
Posted by evilleMonkeigh at 06:26