Well I'm on holidays and back gaming at last after months with nose to grindstone!

But after yesterday, it feels like the gaming IS the grindstone. Allow me to elaborate....


INFINITY
Well, I got a big box of Infinity goodies in the mail, and I must say, Corvus Belli are starting to irritate me with how they are producing their "newer" miniatures.

Lazy Mold Design
The "new" miniatures have a ridiculous amount of flash - chunks from the molding process.  No wonder prices have gone up - I almost get enough leftover metal scraps to make another 28mm figure!

Sometimes the leftover mold chunks are actually thicker than the arm, leg or weapon they are attached to, making removal tricky AND removal is never 100% "clean" even when filed/trimmed - which stands out even more starkly on such a finely-detailed mini 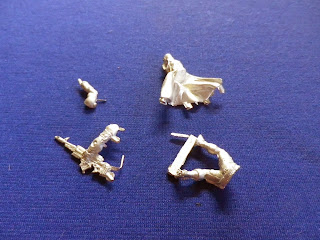 Here's a Nomad Sin-Eater as an typical example. I count 13 pieces of flash:

Gun/gun arm: 6 - yes, the big one near the shoulder is flash
Other arm: 1 (plus a small amount on the end of the hand I didn't count)
Legs/Base: 1 - this is fine, as most models have mold chunks on the base
Torso: 5 - the chunks on the base of the cloak are hard to remove as they are much thicker than the cloak itself

Multi-Part Mania
The more recent mania for multi-part Infinity minis is irritating. Some have 7 or 8 pieces. That's a single 28mm figure!  I know Tamiya model kits that are less complicated. Some might argue it helps people "personalise their models" but does not hold water - many pieces are separate heads  - and in particular legs - that can only be attached one way anyway.

Furthermore, since in Infinity it is extremely unlikely ever to be more than one of a particular model on a table anyway, people can simply "customise" their models by not slavishly copying the official paint scheme for once! Unimaginative drones. Sheesh. I call this "Games Workshop" syndrome.

In addition, the "box sets" have parts for 4-6 troops just randomly thrown together in a bag.  This is a problem as only one particular arm/weapon combo will work on one particular torso, and since some torsos and weapon poses are VERY similar, it's not unusual to realise the arm you just painstakingly glued to model X actually belongs to model Y, and is in fact the only arm that fits model Y.

Lastly - "three point" attachments (where you must glue 3 separate items simultaneously) are very annoying if you only have the default two hands.

I must have spent 4 hours prepping a dozen Infinity models yesterday. I estimate my time spent as:

Boutique Quality?
$10 for a single metal 28mm model puts the model in the "boutique" category.  I expect better worksmanship for that kind of money.

Yes, they are nicely posed and beautifully detailed.  But I just got some modern minis from Red Star/Empress Miniatures which are just as detailed, and cost $2.50 each.  And they were only 1 or 2 part models.  And they had no flash. In fact, for the $7.50 price difference Corvus Belli could hire someone to file the flash off each model individually...


PLASTCRAFT FOAM TERRAIN
Due to the size of my order, The Combat Company sent me some free PlastCraft foam terrain.
And I'm sure glad it was free, because if I had paid $18 RRP for it, I would have been really cheesed off. 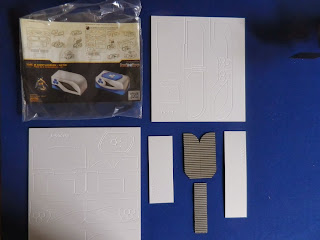 This is what you get for $18 - two sheets of foam and some corrugated card.

But wait, PlastCraft's definition of pre-cut differs from mine (and everyone else's).  I thought pre-cut meant the pieces were already cut out (or at least, perforated so as to snap off by hand). You know, so I don't have to cut it myself. 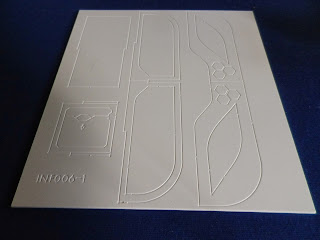 At first glance, I assumed you could "snap" the model out of the sheet. But no, you still have to physically cut out every bit of it with a knife.

But no, Plastcraft means "pre dented" - they've simply scored lightly intented lines to show you where to cut. And there's quite a lot of cutting. Quite detailed cutting, the sort you buy "pre-cut" terrain just so you don't have to do it.  So effectively, you are paying $18 for two small sheets of foams with some tracing on it. 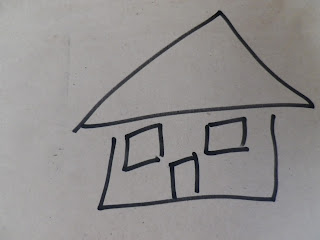 If you still think the PlastCraft stuff is a good deal, then allow me to sell you some of my "pre-cut" MDF terrain. Simply cut out the house where indicated.* (*saw required) 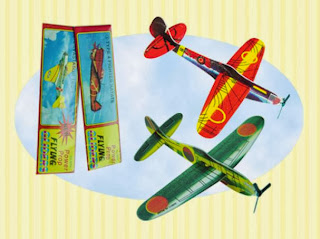 The Chinese have been managing to pre-cut things out of foam for years.  They'll even paint the foam, and chuck in a plastic propellor and rubber band - and only charge you $2 for it.

OK, that's off my chest. Coming up: