Moving on from IGOUGO - Activation, initiative and movement in wargames

I was thinking about this yesterday when I was looking through my Bolt Action rulebook.  I think my opinion of Bolt Action is "perfect for its intended role to attract 40K/Flames of War players into 28mm WW2 market."  It pretty much reuses a simple mix of FoW and 40K mechanics (unsurprising since FoW mechanics seem pretty much a straight rip off from 40K) - the only vaguely interesting thing about it was it did not use IGOUGO.

I find it interesting while most games (that aren't trying to suckle the GW teat) tend to tout new and interesting mechanics - such as cards instead of dice (Malifaux), these games often still use IGOUGO or some very slight variation thereof.

No, this isn't a "people who like IGOUGO are dumb" rant

I think whilst IGOUGO works fine for some games, its lazy overuse means often rules designers miss out on a vital aspect of gameplay - i.e. deciding when units activate and move adds another layer of "tactics" where player can influence the battle.

From a gameplay point of view, limiting a player's actions to only their turn - typically 3-6 times a game  - significantly cuts down on their interest and involvement.  As a sports teacher, I tend to be very careful of games where players "sit out" for long periods. 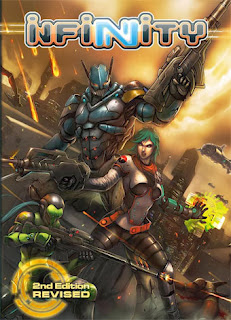 Infinity, with its resource-pool of "orders" and infinite reactions, is a radically different game from a "straight" IGOUGO like Necromunda
Definition:
Since all games involve an element of turn taking, when I say "IGOUGO" I mean Warhammer-style games where one player activates and moves all his miniatures, resolving all firing and actions, whilst his opponent goes off and has a cup of tea.  i.e.

Benefits:
-IGOUGO is simple. It is very clear as to who can do what, when.
-IGOUGO is somewhat predictable - i.e. it will take them x turns to get into close combat, in which time you can do y damage with your units.  There are less "decisions" and you can chain events together without an opponents' interference. This is very appealing to some people.
-You can get food/drink/toilet breaks while it is "their go" and socialize more easily

Someone once told me IGOUGO makes a game more like chess. Technically, no. Chess has alternate unit movement - you don't get to move all your pieces before the opponent responds!

Drawbacks:
Von Clausewitz was at pains to point out war is unpredictable - he uses the words "interaction"  "friction" and "chance". A battle does not produce a single reaction, but dynamic reactions and interactions.

IGOUGO limits those "reactions" and "interactions" to perhaps 3-6 major incidences - the "turns" for each player. In IGOUGO games, units usually have a fixed, known movement distances and firing ranges, which take a lot of the uncertainty out of a battle. Since reactions and interactions are so limited, and movement is predictable, the starting position of the miniatures is more important.

In IGOUGO one player knows exactly what the other can do while he maneuvers, fires etc - precisely nothing. He knows he can carry out his "plan" for the turn without interference, and perfectly co-ordinate his forces. Not only does this mean the non-active player cannot do anything, but the active player does not need to worry about a response - which further simplifies decision-making.

Take chess as an example. Each time a piece is moved, it creates a completely new dynamic for the opponent to respond to. In IGOUGO, a player only has to "respond" to the dynamic created in his opponent's turn (which occurs only a few times per game), and his own die rolling.

In short:
1. It's less "realistic"in that it has few reactions and interactions; players can act without interference
2. It offers less opportunity for player decision-making and involvement

It's about increasing decision opportunities
This has nothing to do with "taking away" player decisions. There are some systems (such as those by Two Hour Wargames) where you have to roll a dice which dictates your response i.e. if you are fired upon you roll a dice to see if you return fire, take cover, retreat etc.)  To me, whilst this is a valid "flavour" of wargame, this also is limiting as it also removes "decision making" opportunities.   IGOUGO also limits decision-making opportunities, as well - to an average of 3-6 "turns" per game.

Using a more random method (such as cards) for units does limit a player's ability to flawlessly execute plans, by making things less predictable (and arguably, more "lifelike") but does present players with a continually changing array of choices.

Realism vs Gameplay
I'm not super-focused on "realism."  Though it annoys me when people trot out platitudes like "it's only a game"  "it's impossible to be real, it's only toy soldiers." I bet they'd object if I said "then, OK, let's change the game so rifles shoot 6" and pistols shoot 48." We are striving for realism, or at least plausibility.  But for me, realism is balanced against the complexity it requires. Take Harpoon for example. Realistic? I'm told it is.  Fun? For a select few.

IGOUGO is a little less "realistic" than many other methods. It also, more importantly, has less player decision-making opportunities and involvement. And those decisions are artificially free from an opponent's interference. Is it so much simpler and faster than the alternatives, that this tradeoff is worthwhile? Does it improve gameplay so much as to be worth the tradeoff?  I'd argue most times, it isn't.

Decisions, good. Complexity, bad.
I maintain that a good wargame gives you lots of opportunities to make decisions.  Of course you don't always get to carry these out due to opponents, unlucky dice rolls, etc - von Clausewitz would call this "friction" - but the opportunity should be there.  Players should be involved as much as possible.  When I review a wargame, here are a few gameplay points I consider: 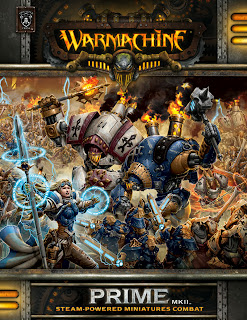 Warmachine, with its reliance on synergies between friendly units (i.e. caster and jacks), needs IGOUGO and the guaranteed, unopposed co-ordination of friendly units

So where are you going with this?
Games are about having fun.  They are also need to be "realistic."
Realism tends to be at the expense of complexity, which can reduce fun.

Traditional IGOUGO tends to trade off a lot: realism, decision-making opportunities and player involvement - in return for simplicity.  However it is not that much simpler than the alternatives.

Here's a few common examples:
IGOUGO with limited reactions "a.k.a. overwatch" (40k 1st ed) Orders can be "saved" for later.
Phased IGOUGO (LOTR). A moves, B moves, A fires, B fires, both melee

Alternate Movement - (Chess) a player acts with a single unit, then opponent responds
Alternate Movement v.2 - players take turns choosing a unit to activate, can be theirs or opponents'
IGOUGO - roll to maintain momentum - if you fail you lose your turn (Warmaster, SoBH)
Card Based (Bolt Action) - random draw for side A or B; players can choose the unit to act with
Card Based (Two Fat Lardies) - random draw tells the exact unit that can be activated
IGOUGO with infinite reactions (Infinity, Tomorrow's War) - non-active player has unlimited reactions to active player

This is just a quick example, but all of these have a higher level of player involvement, more decision-making opportunities, and less predictablity (a.k.a. more realism) than straight IGOUGO.

IGOUGO is not bad in itself. In fact, many players may prefer it due to its higher predictability, fewer decisions and more "down-time." Some games that rely on coordinated actions between friendly units (such as Warmachine) might not work as well with another method. But I'd appreciate it if more game designers please considered the opportunities for more player decision-making ("tactics") in the activation stage.  "Initiative" and "activation" is the section usually on the first page of the rulebook. But usually it's really just an afterthought.
Posted by evilleMonkeigh at 01:51