I thought I'd share a series which has inspired an interest in 100 Years War (I've got 28mm Perries sitting on my workbench as we speak...)

The author Maurice Druon (1918-2009) was himself an interesting character. He served in the cavalry and French Resistance, and co-wrote the Chants de Partisans anthem of the French Resistance in WW2 (to whistle the opening bars was often used to identify oneself) which is now an official anthem of France along with Chant du Depart and Marseillaise. He wrote the Accursed Kings from 1955-1977 and thus the books are a comfortably readable size, not the bloated 700+ page monstrosities which seems to be the current staple of historical fiction and fantasy.

The TV mini-series (or more specifically, the 2005 remake I am watching) consists of 7 episodes, which follow the books faithfully (for once!). Gerard Depardieu was the ill-fated Templar Grand Master.  In Australia it was on SBS, but if you live elsewhere you may be hard pressed finding a copy (legally, anyway). Subtitles may annoy some people. Considering the subject matter it is quite restrained - I could only imagine the sex and gore if HBO got hold of it. 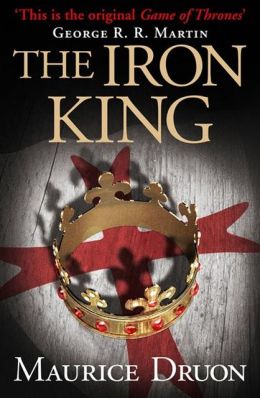 The books are a good read, without being monstrous 700+ page tomes.


A Overview
The seven books follow the reign of the last Capetian kings and the first two Valois ones - from Philip the Fair to John II. The scheming of Robert of Artois and his aunt Mahaut of Burgundy are a strong part of the plot.

George R.R. Martin credits it as a major influence on his dark, gritty fantasy blockbuster A Game of Thrones.  We have adulterous, scheming, backstabbing characters, and The Iron Kings launches with Robert of Artois scheming with his cousin Queen Isabella of England to expose the adultery of the three Princesses of France (the Tour de Nesle Affair.)  The Princesses are daughters-in-law to the King but the reason Robert targets them is that they are the daughters of Mahaut of Burgundy, Robert's aunt and a conniving old bimbo who managed to disinherit Robert and seize Burgundy years before. King Philip (a bit of a cold fish) is less than pleased, flaying their lovers alive and imprisoning the Princesses in a fortress.

The "curse" is placed on the King's family by the wealthy Templar Grandmaster who is burnt at the stake as a heretic by King Philip when he is less than forthcoming with a loan.  The king then puts the squeeze on the Lombard bankers (he's already drained the Jews.) There is plot and counterplot.  The king's chancellors, Nogaret and de Marigny, his sons, Louis, Philip and Charles, Philip's brother Charles of Valois, and the Lombard bankers - all manipulate others (or are manipulated), although the feud with Robert and his aunt Mahaut seems to be the overarching plot line.

The books consist of The Iron King, The Strangled Queen, The Poisoned Crown, The Royal Succession, the She Wolf of France, The Lily and the Lion, and When a King Loses France. The first three have been recently reprinted in paperback and they are the ones I currently have read.


The (albeit subtitled) TV series is quite well made - here the principal protagonists Mahaut of Burgundy and Robert of Artois are shown. It's pretty restrained i.e. "wife friendly" with no overt sex or gore.


TL:DR
An eventful series which detail the lead-up to the 100 Years War. Plenty of intrigue, plots and double-dealing. A PG "Game of Thrones."  Books are a reasonable size and the TV series (whilst hard to obtain) is decent quality.  Plenty of wargaming inspiration.  Recommended.
Posted by evilleMonkeigh at 16:38