This has to be one of my favourite periods/genres of warfare.  The German surface fleet didn't do much of note, with a few fairly futile sorties in all the war years, compared to their E-boats which patrolled the channel and clashed with their British opposites almost nightly.

They packed so much firepower into a flimsy hull - powerboats festooned with torpedoes, machine guns, automatic cannon from 20 to 40mm and (later) 6pdr cannons. And they're so fast!  Some of them were capable of 40kts+ and they operated at night, where ranges could quickly close to a matter of a few hundred yards. (And in many cases, small arms range - many crew fitted extra Lewis guns on homemade mounts and wheelhouse crew often carried Tommy guns and even grenades.)

The rather bipolar mix of cautious stalking at low speeds for torpedo ambush and blazing gunfights at 40kts zig-zagging  through escorts spraying cannon fire makes for some interesting battles.

With most fights including only a handful to a dozen ships/MTBs per side, fights are a good size for wargaming.  And with the sheer amount of actions to choose from, you need never repeat yourself - don't need to repeatedly replay lame and unoriginal Bismark or Graf Spee fights.  In addition, the Mediterranean was another fascinating theatre with a whole new range of auxiliary vessels and tactics - to say nothing of the Pacific. 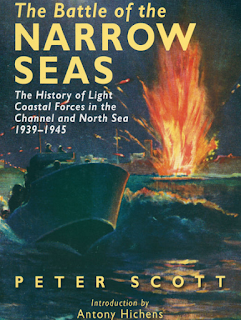 Peter Scott's Narrow Seas book is probably my favourite on the topic...

There are quite a few acceptable rules - I prefer the simpler free Schnell Rules for Schnellboote over the commercial products - if interested, you can find thumbnail reviews of the main rules sets are available here.

Recommended Reading
I'm recently re-reading Peter Dickens' Night Action.  My favourite is The Battle for the Narrow Seas  though Flag 4 by Dudley Pope has a fascinating account of the vigorous coastal forces skirmishing in the Med.  Now I'm re-reading through the topic, I'll try to snag a copy of Hitchens' They Fought Them with Gunboats.

Osprey as usual has a few useful titles - looking across I see I have British MTBs 1939-45, E-Boat ns MTB, Kriegsmarine Coastal Forces and British MGBs 1939-45 among others.


So if the topic is so awesome, why isn't my blog full of Coastal forces references?

Lack of Miniatures, Lack of Value
You've got pretty much two choices - resin 1:700/1:600 from PT Dockyard or Skytrex - or the wonderfully detailed metal 1/1250 Figurehead - which is more affordable but honestly, too tiny to be appealing.   Both are pricey - with the AUD plummeting from once-parity to the USD E-boats at $4.25 are $6 ea.   An armed trawler could be around $12AUD.  Given I'd have to buy both forces, that's 100s of dollars from my gaming budget in resin (a modelling medium I dislike). I already have a few 1:1250 which are detailed but simply too tiny to be appealing, and though more affordable (~$12 for 4) I don't feel like I am getting much "bang" for my buck.  They're just too tiny to be fun, and it feels a bit lame when $150 of ships fit in a soap holder.


As usual, anime like Blue Submarine No.6 has too much weirdness and navel-gazing philosophy, but the hardware is cool...
Sci Fi Alternatives?
As usual, this inevitably drives me to tinker with my Supercav homebrew undersea submarine-fighter rules - which pretty much deliberately approximates MTB warfare: small 5-man fighter subs 50tons who stalk at 20-30kts before accelerating to engage at 120kts+ using solid-fuel rocket engines and supercavitation tech including underwater cannon.   It's not WW2, but it does add in a 3D element and can be played for a fraction of the cost - EM4 starfighters stand in as subs and are both larger and more detailed than 1:600 craft: at 50c each they are a fraction of the cost.    Also, it gives me an excuse to mix in weapons from my other favourite era - 1950s jet combat - which has plenty of miniature options but is shamefully under-represented in the rules stakes (yes, I know about CY6: Jet Age but I don't like the order-writing mechanics nor the fact I'm limited to 2-3 fighters per side, and C:21 criminally neglects ANY altitude rules).  I mean, who doesn't find the idea of firing unguided nuclear rockets fun?
(Note to self: I should repost the revised rules on the DV google group)

Interestingly enough, it was pointed out to me that the RPG Blue Planet has similar high-speed fighter subs and I recently saw a clip from Blue Submarine No.6 - but my original inspiration was a subfighter from 2300AD fan site and an article on the Shkval torpedo.
Posted by evilleMonkeigh at 06:46