I'll add this one to the Savage Worlds review series.  These are quick to do as I don't need to playtest them (balance isn't so vital in a RPG and we know the base Savage Worlds mechanics work).
Bear in mind I review this as a wargamer not a RPGer. For a RPG nerd's version, there's usually reviews about on RPGNow etc.

The Shiny
Well this is a PDF after all; however full colour art is decent if cartoon-y.  Similar two column layout to most other SW rulebooks.  Solid but not particularly impressive.
The game uses hand, knuckle and finger as measurements which probably adds atmosphere as a RPGer but I merely found annoying to convert. 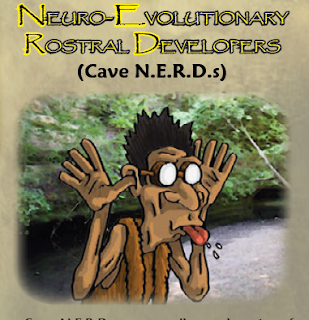 If you love puns and the idea of Cave NERDS makes you hysterical with laughter, you will enjoy the Flintstone-esque humour in this supplement.  I personally found it varied between grating and cringeworthy.

Character Creation, Gear etc
Always a big deal in RPGs. As a wargamer, not so interesting.  It's evident S&S is lighthearted  - i.e. Cave GEEKS is a class.  It also has Dino Sapiens which will give a use for Lizardmen when GW inevitably Squats them.  They narrow down the base SW skills to ~30 and add in caveman-y ones such as finger counting, fire starting, pictograms etc.  There is a new Magic mishap table which includes coconuts falling on your head, your nose growing, bad flatulence etc.  Magic spells are divided up by Shaman class i.e. Earth, Moon, Fire, Beast, Water etc.  There are gear tables which include coconut helmets and dino-plate armour as well as the usual bows, clubs, spears and slings etc - unsurprisingly they're pretty limited in the gear department.    They aim for comedy with Flintstone-esque vehicles and pun-named gear. Ugh.  Thee is the usual SW list of relics and legendary "named" gear "Gem of Powuh" and "Hungo's Hullking Helmet" etc.

Setting & Encounter Generator & Scenarios
More humorously named villages and caves are described but I could have had a nerdy 12 year old from my school do it just as well.  The encounter generators for different biomes (forest, mountain, water etc) are the first useful thing I've found in these rules, bar the helpful arranging of spells into shaman classes.  The scenarios were quite extensive, and possibly useful for RPGers, but by now completely disinterested in the lame writing and forced humour I admit I skipped most of this section.

Bestiary
There is about 45 new beasts good for prehistoric gaming, like T-Rexes, Pteranodons, Mammoths, Dilophosaurus, raptors etc.  This is probably the most useful part of the book, but nothing you couldn't do yourself with a modicum of common sense.

TL:DR
A Flintstone-esque style which aims for humour (and misses).  Honestly, it adds little you cannot do with the base Savage Worlds rulebook.  The bestiary and scenario generators are the only useful new content, but you could rig them up yourself with little effort.