We have so many attempts to "modernise" the bard's work; so why not take a contemporary work and translate it into iambic pentameter? Genius!

RED LEAD: Good men, each now shall speak and state his name

RED SIX: Disaster at me strikes!

RED SIX: I may yet set it right

COMPUTER: In seven minutes shall the Death Star be
Within the range of our fair rebel base 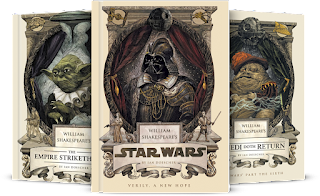 I'll be checking out The Empire Striketh Back and the Jedi Doth Return...

VADER: I sense the Force in this one here, almost
As if I did my younger self espy

VADER: I feel thy lack of faith disturbing

TARKIN: Cease!  No more of this! Lord Vader, let him be.

VADER: As thy will. [Aside:] My point hath been well made
Upon his prideful, unbelieving throat

BEING TWO: I say!
He liketh not thy look

HAN: Tis but the ship that hath the Kessel run
Accomplish'd in twelve parsecs, nothing more

HAN: Nay, not that:
The day that Jabba taketh my dear ship
Shall be the day you find me a grave man

HAN: Aye, I'' warrant thou hast wish'd this day
[They shoot, Greedo dies]

[To innkeeper:] Pray, goodly Sir, forgive me for the mess

[Aside:] And whether I shot first, I'll ne'er confess!

OFFICER ONE: [through com link] But who art thou, and what's thy number code?
[Han Solo blasts comlink]

HAN: That conversation did my spirits bore!
Now Luke, prepare thyself for company!

Okay, okay, I'll curb the quotes...
This book has been my most fun read since Johannes Cabal: Necromancer.  It appeals to the inner geek on many levels - I mean, if the words "Shakespeare's Star Wars" does not make you prick up your ears, you're probably reading the wrong sort of blog.

You'd leave it: You care for neither Star Wars nor the immortal bard. In which case, prithee fly from this blog, ne'er to return!

Recomended?
Zounds! This IS the book you're looking for...
Posted by evilleMonkeigh at 01:28