In WW2, dinosaurs were prized for their ability to effortlessly wield heavy weaponry.  Their vital contribution to the war effort is often glossed over by modern historians.

Inspired by my daughters toy dinos shower adventures (that sounded odd) and partly by PC games (Dino D-Day, ARK, and the ORION series - especially the latter - I mean, who hasn't dreamt of fighting a T-Rex equipped with a crossbow, jetpack and lightsabre?)   ...I've been wondering why there aren't more dinosaur wargames?


Iron Sky has been vital for exposing the Nazi menace from their moon colonies.  A new documentary reveals their Hollow Earth bases.

Like pirates and ninjas, they are the most under-represented faction of "cool" on the tabletop.  We have plenty of robots and mecha, and every idiot and their dog is making a zombie game.  Cowboys? Tick.  But is there any dedicated dino games and miniatures lines?  No, the only way you'd get them is through some tiny boutique manufacturer, sold in a paper bag like a X-rated VCR.  They might be mentioned in passing in pulp rules, or in a supplement no one much plays.  (Though the lovable pulp-obsessed oddballs at Lead Adventure probably have a forum on it)

I can't think of any wargame franchise where dinos have their rightful starring role.  I mean, we know they fought with the Nazis in pivotal moments of WW2 (thanks to classic historical works such as Iron Sky, Danger 5 and Dino D-Day).
(No, Lizardmen don't count. They're Aztec alien lizards from space, not dinosaurs.  They're as much dinosaurs as Michael Bay's Age of Extinction transformers)

Here's my second thought - how would humans in various eras match up against dinos?
Sure, if you're jetpacking past wielding a lightsabre you might have a fighting chance - but surely a T-Rex would mong down on a medieval knight?

I've personally never "bought" the theory a giant asteroid mashed the dinosaurs or whatever it did to bring about their extinction.  I mean, Occam's Razor suggests the most common cause of animal extinction would be behind it - i.e. mankind.   A generation raised on Jurassic Park might think "T-Rex - RUN!" but our hardier ancestors may well have throught "Yippee - food for the whole village - in one easy package!"

Since 100% of our dinosaur knowledge is educated guesswork (and in many cases, wild conjecture presented as fact) I think the man vs dinosaur matchup can be pretty much how we wish it to be - but would be slanted in favour of humans rather more than contemporary movies suggest.   Heck, computer simulations suggest a human can keep pace with a T-rex, as opposed to the "chase-down-a-jeep" speeds shown in movies.  Humans are, after all, an exceptionally cunning and vicious species.  I'm sure they would have adapted specialist tactics to bring down whatever dino they hunted. (Also, with those tiny forearms - am I the only one who thinks a T-Rex might not be so scary if it was tripped over?) Heck, they might have only had to knock out the dinos traditional food source, rather than directly hunting carnivores, but I wouldn't bet against it.  That said, for wargaming, I'm thinking traditional tactics:

..I mean, just grab your favourite historical period and add dinos in.
Finally, a way to make Napoleonics fun?

As firearms become more capable it becomes hopelessly one-sided, but remember, we're flexible - if scientists have latitude to make up stuff about dinosaurs, so can we.  You didn't know that Velociraptors had infared vision and could spit acid, did you?   ...and they haaate Tiger tanks.  It's something about the smell of diesel that makes them go into an attack frenzy. 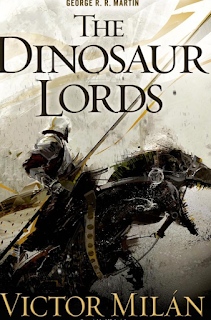 Many species of dinosaur make excellent steeds and are both stronger and more vicious than a trained warhorse - something many medieval knights took advantage of.

Liberated from the guesses of others, we can attribute intelligence and traits as we please to - for example, perhaps dinosaurs were much smarter than their cranial capacity suggests.  Maybe they were all more like Jurassic World raptors or elephants rather than crocodiles or goannas.   Think along the lines of a Mumakil-esque gondola on a brachiosaurous or armoured ankylosuarous deflecting arrows then smashing through a battle line...   ...dinos could act as mounts or beasts of burden, even towing siege equipment or breaking enemy lines like war dogs.

Dinos, dinos everywhere...  a visit to any department store or $2 shop will usually turn up dinos sold either individually or by the bag.  They're super cheap, and often quite decently modelled. Generally the main concern is a hideous paint job, which is easily enough fixed.  Note: the softer plastic ones don't accept spraypaint to well (so round #2 will have me holding the can back so the solvent doesn't hit it (styfoam-ball style) or see a brushed undercoat first.  I'll upload pics when I steal more dinos out of my daughters' sandpit collection.

Anyway, I meant to explore what existing wargame rules would work well with dinos, and how to fit them in to games, but I realised I must get to bed before my wife checks how late it is and my fossilized carcass is discovered thousands of years later....
Posted by evilleMonkeigh at 08:31