My new 'gaming room' being the unfinished shed in my new house, fading light forced us to finish early.

Cheated of my anticipated game of Force on Force, I cajoled my wife into a game. Despite the sci fi minis I used the modern ruleset, shorn of gadgetry and vehicles, for simplicity's sake.

She opted for USNC GZG marines.
CQ8, Morale 8.  3 fireteams of 4 marines (+rpg) and a hvy assault bot.  Supported by a sniper team and 2 HMG teams.

I was left with Micropanzer SAS.
CQ10, Morale 10.  A 4-man team stealthy scouts with scoped weapons, 3 fireteams of 4 marines (+melta), supported by a single heavy weapon melta team (I treated the melta-like BFGs carried by the SAS as rpgs for the gameplay purposes)

My job was to capture 3 objectives/hotspots by turn 3 otherwise she would recieve reinforcements from said objectives.

The wife set up fireteams in buildings as I advanced rapidly to the objectives. 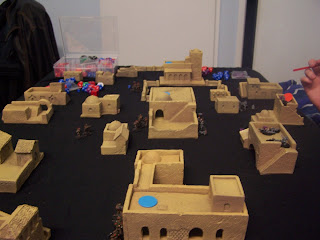 My troops in the middle ran into stiff opposition from her emplaced weapons teams. One fireteam was pinned and pushed back with serious injuries. 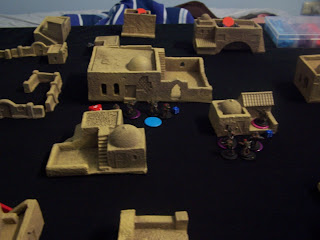 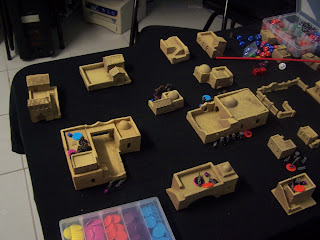 On the opposite flank, a fire team occupied the mosque despite taking sporadic fire and hits from the USNC sniper team. 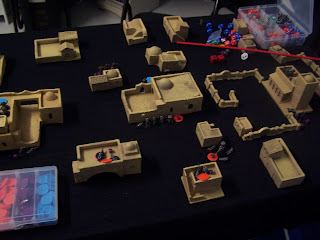 My attack in the centre was repulsed, my fire team falling back after taking casualties.  I had been bloodied but held two of three objectives, whilst only 1 enemy fireteam was in any shape to attempt a re-capture of a building.  As the wife was tired, her counter-offence was to be postponed to the morrow.  To be Continued:
Posted by evilleMonkeigh at 07:05