Secrets of the Third Reich - an excuse for cool toys

I must say that of all my 'toys' the ones that attract the most comment (even from non-gamers) are mecha.  Suckers like these: 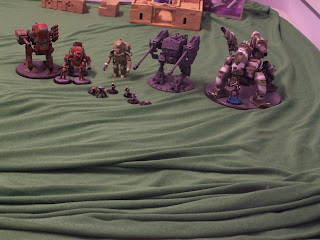 They are all prepaints.  To give you an idea of what they look like with a good paintjob check out this guy at DakkaDakka

They are startlingly cheap. The Rackhams are OOP but the largest (the 4-legged walker) cost me $15 from an online store.  The Kolossuses, similar to a GW dreadnought, cost only $5.  The Dust Tactics mecha are less sci fi (but by the same sculptor as the Rackham ones) and new ones are being released - about $25 from Maelstrom with free P&P. All the models, combined, cost me less than a single GW dreadnought.

If you know nothing about M.a.K., then I suggest you go here. A fantastic dieselpunk series in various scales - some truly awesome models.  Mine was a $5 prepaint - the proper kits are awe inspiring. Go here and check out the gallery, or google images of "Maschinen Krieger"


Here is a random sample: 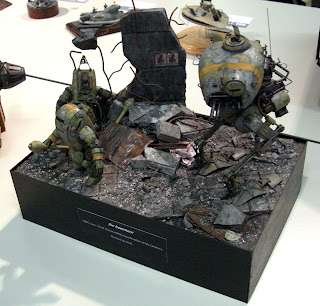 The MaK universe seems to attract talented scratchbuilders too.
What do all these models have in common?  The weird war II game, Secrets of the Third Reich. The build-it-yourself points system so you can include random mecha is a fantastic idea, and what sold me on the game.
In a nutshell, the game reminds me of 40k-style mechanics, with actual tactics added - such as overwatch, alternate move, etc. A very decent game system, which I am now switching to from AE: WWII.
For more info, I recommend Anatoli's blog in my links section, which has a large SOTR section with lots of fun AARs.
Do yourself an favour - get SOTR, and have an excuse to collect and play with more cool toys!
Posted by evilleMonkeigh at 01:11