This probably isn't a news flash, but in case you're a VSF lover who has been under a rock (or without internet connection) since April, the Space: 1889 universe is being revamped.

The sculptor has history with Splintered Light and Rebel Minis who are both top-notch 15mm manufacturers - so I have high hopes for the sculpts. I didn't really get into Space 1889 the first time round (by the time I 'discovered' the universe most stuff was hard to get).  I am especially looking forward to the airships and sky galleons miniatures. If you don't know what I'm talking about, this is one of THE pioneering VSF games.

"Role-Playing In A More Civilized Time. Everything Jules Verne should have written. Everything H. G. Wells could have written. Everything A. Conan Doyle thought of, but never published because it was too fantastic. Everything you need for adventures of the century! The Space 1889 role-playing game covers the exciting background of Victorian science fiction: ether flyers and Martian cloudships, the canals and ancient civilizations of the red planet, Venus' swamps and dinosaurs, the honeycombed interior of Luna, and the thrills of inventions and inventors: the driving force behind Victoria's multiworld empire!
Space 1889 is Frank Chadwick's registered trademark for his game of Victorian Era Space Faring. Originally published twenty years ago by GDW, Space 1889 is the original "steam punk" game, even though it pre-dates the term by a couple of years."

Here are some interesting photos from Alan Patrick's Wargaming site.

I have a few of their books and rules (I found the "Iron Clads and Aether Fliers" rather disappointingly 1980s clunky) and their pdfs are put out by Heliograph with most available at the wargames vault.

I'm not a RPGer, but apparently Savage Worlds are porting the 1889 universe to their system which I suspect will be a bit more user-friendly than the old GDW stuff.

Although aeronef are mostly (in my mind at least) associated with Brigade games, I like the ones by Irregular Miniatures 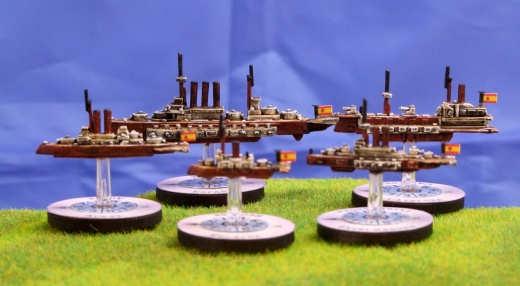 I must say I have avoided Irregular in the past as people say "they paint up well" which is usually a polite euphemism for "the models are rather ugly and chunky." But what with 1889 re-launching, my resolve is weakening...
Posted by evilleMonkeigh at 02:05