Battletech was one of my first wargaming experiences back in my teens.

I loved the giant stompy robots, the heat management, and the ability to customise my mechs.

I didn't like being restricted to only a few mechs each without the game bogging down. I also didn't like that 70% of the game was spent resolving damage aka "book-keeping" rather than actually playing.

So along with Star Fleet Battles, Battletech went into the "box under the bed" as I looked into faster playing games.

Over the Christmas holidays I downloaded Mechwarrior Online - a free (yes, free) PC game which is what I'd call a "commercial beta" -i.e. a game without full features but one the producer is willing to charge you for.
I don't normally "review" PC games - but this is relevant to a very revered line of tabletop miniatures games. So - what is Mechwarrior: Online all about?

Much to my surprise, I found a lot to like.

Basically, it is a glorified 12 v 12 deathmatch or capture the base, with rounds lasting 5-15 minutes, on about a dozen maps (one of which does not render properly - grrr). There's no single player campaign and no salvaging (boo!).

However there is surprising depth of play given the rather basic nature of the game. 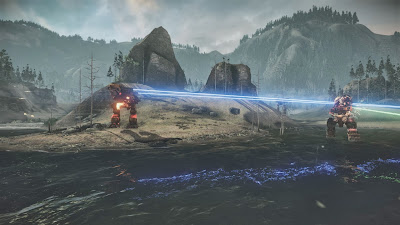 The game sticks pretty close to its table-top ancestor.

Pimp Your Mech
The mechs are very customisable and you can spend hours modifying weapons, armour, engines and modules. The mechs and weapons seem pretty accurate to the tabletop games, and you need to juggle tonnage, critical slots and weapon hardpoints. "Fitting" out your mech to suit your personal preferences is a lot of fun, and there are cool tools like smurfy's mechlab that allow you to do this out of game.


Gameplay
Whilst not a true "Dad" game like the slow-paced World of Tanks, MW:O is far more thoughtful and tactical than the average shooter.  Knowing how to manage heat and how to "torso twist" to absorb incoming fire on your undamaged armour, and how to focus your fire on specific mech parts is more important than l33t "twitch" skills. Commonsense (not so common in your team mates) such as: staying in  groups, not exchanging fire with a mech twice your size when stationary, and not trying to take the entire enemy team solo  - is more important than either. Quite a of wives and girlfriends play this due to the slower pace and lack of gore, and the community is very helpful. Many are tabletop Battletech enthusiasts. This would be a good game for father-son gaming (and link well with the tabletop game as well!)

The game is pretty "true" to Mechwarrior/Battletech - weapons and equipment have the same stats as in the tabletop game although I think the mechs are a tad tougher due to simply wanting the games to last more than 1-2 minutes.

I really like how light mechs are useful - they often rip apart much larger mechs who are simply to slow to track them with their guns - and assault mechs trade off their awesome armour and firepower for poor maneuverability. Mediums seem to be in the worst spot with no particular "strengths."

The game seems to handle high ping reasonably well (In Australia, I play at ~250) and has pleasant graphics (CryEngine 3). I wouldn't say hit rego is 100% reliable and the collision mechanics with other mechs is weird (it seems like you sort of judder then warp "through" them) but the game is solid enough.  It just doesn't have many features - it's generally death-match or a "capture the base" version that inevitably devolves into a death-match. However if you were happy with the "variety" or lack thereof in games like World of Tanks there's nothing to complain about here.

If you haven't played a Mechwarrior game before then features like torso twist (your upper body faces one way while your legs travel another) and jump jets can be a bit disconcerting. Managing heat adds another thing to keep track of.  So there is more of a learning curve than playing the latest CoD game. 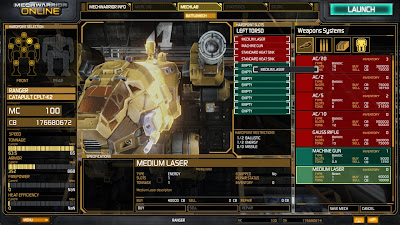 Customising your own mech is incredibly satisfying.

The Grind
This is quite painful. You get 8-12 million C-bills in your first 25 games which is enough to fully fit out a custom assault mech or several smaller ones.  After that your income falls to 100k or so a game - which means it will take 50 or so games to "grind" a new mech, and probably 25 or so more to fit it out.  That's 12 or so hours of gameplay for a single mech! And you may want to buy 2-3 different versions of the same mech in order to maximise your skills.... so, yeah...     I'd recommend opening another account on a different email to get the cadet bonus twice - it makes THAT much difference. Basically you get in 25 games (a few hours) what would take you 120+ games of normal play.


Starting Out
I loved the old Mechwarrior games - I'd like to check this out!

Ok, this is the stuff I wish someone had told me...


Make sure you use your free "Premium" time during your first 25 games.  It will make you ~4 million c-bills more if you do, even if you play terribly. Don't save it for when you are a "better player" - you'd have to play 80 good games later to get the same benefit.

Each mech you buy will need ~2 million c-bills to buy near-mandatory endo-steel and double heatsink upgrades.  Heavier mechs may spend ~1-2 million in weaponry but lights need expensive XL engines (which cost staggering sums of ~4 million+ - more than a new mech!).  So "light" mechs are not necessarily the cheapest. In fact assaults tend to need the least modifying from "stock" to make them work well.

XL Engines are a big expense.  300XL and 255XL engines are very popular and fit on many mechs. You might want to consider buying mechs that come fitted with them standard - such as the Centurion 9D and Jenner JR7F(c) - as they work out much cheaper than buying them separately. A "standard" 250 engine works in many mechs as well and is also a worthwhile buy.

I'm not spending money...
Then you definitely need to make two accounts, play your 25 games and grab two mechs on each account. It also means you have 4 garage slots on each account for a total of 8... 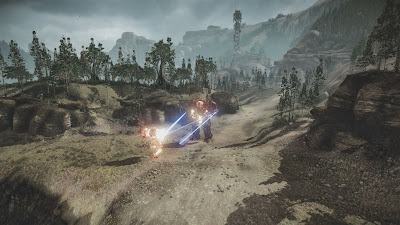 Light mechs rely on speed for defence. Standing toe-to-toe with a heavier mech is stupid.


Trial mechs
Don't rush out and buy a mech straight away. Use your trial mechs for the first 25 games - I'd recommend you play half a dozen games in each class to see what you like (zippy, fragile lights or powerful, lumbering heavies or something in between...).  That said, the trial mechs are usually waaaay worse than ones you can make yourself.  For example the current trial heavy mech Dragon is very weak and can barely fight most mediums, and even the trial light Spider, which is fun, has about 1/3rd of the firepower of a Jenner.

Choose your first mechs carefully - once you spend your cadet bonus, it'll be a loooong time before you can afford a new one...


So what Mechs are good? (Current as of Dec 2013)
Light Mechs
I like how light mechs are both fun AND very survivable due to their agility - I once took on three 100-ton Atlases in my 25-ton Spider and delayed them for several minutes while my team got into position - darting around their legs and jump-jetting overhead - the Atlai did more damage to each other than to my agile mech.  I'd suggest buying a light simply for the different gameplay style to the other classes.   I'd recommend: the Jenners in general (and the JR7F in particular) are the best by a wide margin.  The  Spider and Raven ECM versions are useful as well.  I'd Avoid: Locust, Commando

Medium Mechs
I've found medium mechs a bit "meh" as they seem to lack the sheer speed of a light or the firepower and armour of a heavy.   I'd recommend: any Shadowhawk. You can fit them out to do anything. A fast ECM Cicada is useful and Centurions are tough. Blackjacks are decent. I'd Avoid: Kintaro

Heavy Mechs
These are in the sweet spot for mobility and firepower.
I'd recommend: Cataphract 3D or 4X, followed by Jagermech or Catapult
I'd Avoid: Dragon

Assault Mechs
These can soak up damage and dish out pain, but I personally find them a little too unwieldy.
I'd recommend: Highlander (multirole) or Victor (mobile). Atlas DD for ECM on a 100-ton chassis.
I'd Avoid: Awesome (it's a misnomer)

Some things to consider:
-Does it have jumpjets? (handy for getting over obstacles and performing "pop up" attacks over buildings.
-What hardpoints does it have (i.e. mostly missile, mostly lasers, mostly guns...)
-Where are the weapons mounted? (The Jager has weapons in its shoulders, allowing you to "peek" over the top of hills to fire). Torso weapons allow you to have arms blown off and still be effective. 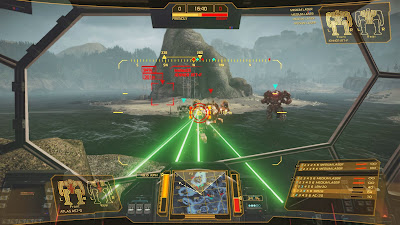 The view from the cockpit.  You can control the mech with a joystick if you want to be really old-school - but keyboard and mouse is easier.


What equipment is good?
You must have endo-steel and double heat-sinks or you are seriously gimping your mech. Ferro-fibrous armour is useful on most lights as well.  If you are using missiles a Beagle Active Probe is important.

Ballistic weapons such as the AC/5 and AC/20 are popular as is the infamous PPC - they do pinpoint damage to body parts instead of "spreading" like a laser's sweeping beam, and are thus more likely to blow off arms and legs etc and cripple the target. Lasers are reliable and easy to fit.

XL engines are light and leave more room for weapons and equipment. They are pretty much mandatory on light mechs, and on others it depends if you are going to "brawl" or not - keeping a standard engine makes you much tougher.

Don't ever sell any equipment - you can always use it later on other mechs. 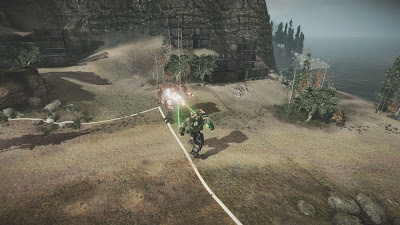 Lasers distribute damage rather than blasting specific parts - which is why I prefer PPCs or cannons.

TL:DR
Not a lot of features but MW:O is pretty "true" to the old-school Battletech.  A game that favours tactics over "twitch" skills which comes with a learning curve to match.  The controls are simple, but a little disorientating at first. You can use "third person view" (heresey!) to see your mech from the outside if needed.

The slower pace of the game means it is friendly for dads and kids equally. My wife enjoys it (and she is not a "twitch" CoD-style gamer by any means).  The lack of gore means it is family-friendly.

The ability to customise your mech is great and fully kitted-out mechs are significantly more powerful than the "normal" versions - however a good player in a bad mech can still beat a bad player in a  good mech. And players working as a team will kick the butts of both of them...  The mech classes are balanced well against each other although mediums don't really have a "niche."

You need to plan your purchases carefully as MW:O is very "grindy" after the initial 25 games. You need to own 3 versions of the same mech (booooring!) in order to unlock bonus abilities.

- "grind"  - play for hours to get a new mech/mechs are expensive to buy with real $
- still a bit buggy at times, plays OK at high ping but hitrego/collision detection not 100% reliable
- repetitive death matches - not a lot of content
-  controls are simple, but a bit disorientating at first - persevere


Recommended? Yes. It's free. There's no reason not to give it a whirl.
Posted by evilleMonkeigh at 17:59