Like all GW-ripoffs with a strong commercial backing, I can tell Bolt Action is going to take off.   So I'm thinking of adding to my Weird War II legions with some "normal" WW2 28mm in case the natives ever stop playing Warmachine.  But I've hit a snag.

Scale
I'm not a scale purist by any means, but I DO find it jarring in Bolt Action when a rifle fires only 24".  They say it is the "effective range" but it seems a bit silly that models are completely immune from enemy fire outside that range. In most games we would call that the "extreme range."

Given the guns do not have any effect at all past that point, that's not actually "effective range" - that's like bullets are hitting an invisible wall and vanishing. Maybe if it was a smoothbore "Brown Bess" musket...  ...but seriously.

Place two 28mm WW2 models 25" apart. Eyeball it.  Now tell yourself "they can't shoot at each other at all as it isn't effective range."  Feels silly, doesn't it?  I know scales are "compressed" to fit games on the tabletop, but some things are just stupid. 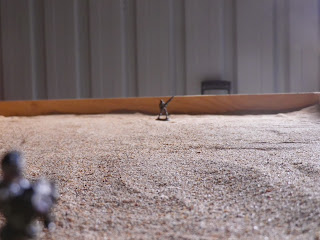 The target is outside "effective" range.  Actually, the target is beyond the maximum weapon range because he is "effectively" immune from harm. 50m? I can kick a football that far. Heck, I could probably hit him with a well-aimed rock... 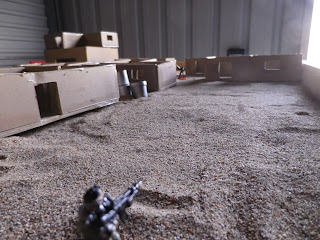 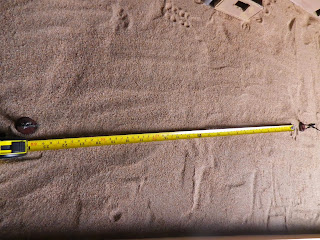 But no, the bullets will magically vanish about a yard from him. Phew, he's safe!


Movement vs Firing
This is, naturally, because Bolt Action has borrowed 90% of its mechanisms from Warhammer 40K and its variants (which include Flames of War and LOTR) - where the the 6" move, 24" rifle/bolter/bow range is already a staple.  Perhaps it was the sci fi setting, where they fire handwavium bolter projectiles that may well vanish at 50m, but I don't recall it bothering me back in the day.  Perhaps I've become a grumpy old man.

Balancing weapon range to unit movement (by radically reducing it so much as to be egregiously out of scale) is one way of balancing the ratio of "fire" vs "maneuver." I'd argue it is a lazy way. If this is only way someone can balance the lethality of firearms in their game, I'd say they are a pretty poor game designer.

But wait! Didn't you just slam modern naval games as "boring" due to the massive weapon ranges and absence of meaningful maneouvre?  Aren't you advocating the same thing here with "long" gun ranges?  Won't people just massacre each other from their deployment zones?

Two reasons - a radar-guided Exocet (whilst it may not be as accurate as the manufacturer claims) can hit far more accurately and reliably at its extreme range than an infantrymen (under a lot of stress) can hit at his extreme range, with bullets.  If the rules have infantrymen is hitting models on the opposite side of the table at 70% accuracy with each bullet, then yes, we have a problem.  But again, that is a game design fault.

The second reason is something largely absent from most naval games - terrain.  Again, I'd suggest this is often a 40K carryover - a hill, a small bunch of trees, and a small ruin on a 4x6ft table is "normal" or even generous, in 40K.  But I'd argue if players are playing with relatively open tables, devoid of interest, their games will likely be somewhat dull anyway - and not because of the rules.

Terrain should be plentiful - both blocking line of sight, and giving benefits to the safety of units (cover "saves" or negative shooting modifiers).  Terrain adds interest, and layers of decision-making.  Occupying certain terrain becomes a desirable objective in itself, and forms a part of the tactical "puzzle" a player has to solve on the way to victory.  A well-set up board would make it unlikely players could even see to the enemy deployment zones. Lack of terrain is a player fault.  People who think terrain "gets in the way" of a game have, I think, missed a key point of wargaming.

This is evidently not an "impossible" design challenge as already we have an increasing amount of games (such as Force on Force and Chain of Command) where small arms range is unlimited on the tabletop - giving their rifles a maximum range of up to (gasp) 72" (432 feet or a  little under 150m) on the average 6x4' table. And people still move miniatures around and don't simply sit hunkered in their deployment zones....
The other option is to simply change scales.  The Two Fat Lardies in their book Chain of Command say whilst they prefer 28mm for "looks", 15mm is more "accurate" given actual tabletop ranges involved (and their rules have "unlimited" rifle range!) 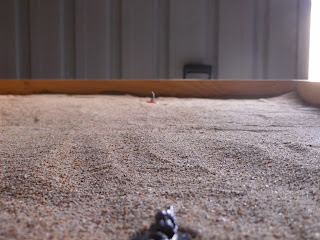 In 15mm, the distance is a bit more to scale, though saying the target is completely "immune" might be stretching it.

So where are you going with this rant/ramble?

Uh... well...
#1. Mr Priestley and Mr Calvatore - stop slavishly copying 40K mechanics. You don't work for the Evil Empire anymore.  You are free. Free!
#2. Rifles can fire further than 50m!  Realistic (or at least vaguely plausible) weapon ranges are fine - problems will lie in the rules mechanics or the terrain. Games can condense down ranges - but not so it looks silly to a player. In short, Bolt Action is lazy game design. Consider the period you are gaming, please, and don't simply use rehashed fantasy rules.
#3. Whilst the models aren't as impressive, smaller scales look more realistic.  I'm giving 15mm WW2 serious consideration. In addition, $15 for 30+ 15mm infantry with support weapons and $10 for a tank or truck is pretty sweet. $50 for a complete "army" (or rather, platoon) is eminently reasonable.

So what do you reckon? Is this poor game design? Does having a "reasonable" scale matter and what is, exactly, "reasonable?"  Or am I simply turning into a grumpy old man....
Posted by evilleMonkeigh at 21:58