Realism = Bad?
If you say a wargame needs to be more realistic, you usually get showered with a bunch of platitudes like:

"It's just a game, sheesh."
"Do you LIKE lots of charts and tables?"
"It's impossible to be real, you're playing with toys."

The first is a load of crap.  Yes, it IS obviously a game. But so is tic-tac-toe or poker. I play wargames so I'd like it to bear at least a passing resemblance to warfare in the period. If not, I might as well use my miniatures as chess pieces.  I don't play medieval siege battles using space marines or refight Stalingrad using ancient Hittities on DBA basing, and I don't know many gamers that do.  If they have WW2 miniatures, they tend to play a WW2 game.

The second is a "straw man" argument - a misrepresentation or informal fallacy. No, I did not say I like wargames to have lots of charts or to be complicated. I said I liked them to be more realistic.

The third, if not another straw man, is definitely disingenuous. Yes, it IS impossible for a game with toys to replicate a real war.  But obviously it is possible to give an acceptability accurate (aka plausible) "feel" for warfare of the period. Otherwise, why have militiaries used (and continue to use) "wargames" as a teaching tool and visualisation aid? 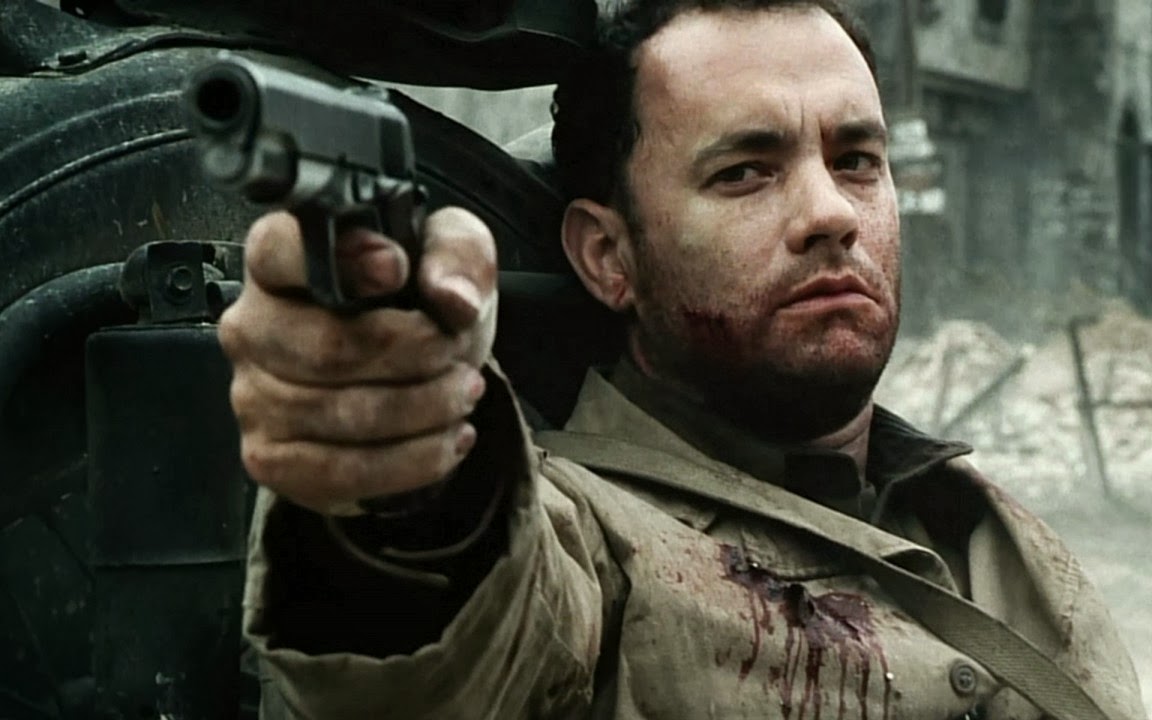 Because that Colt .45 will definitely knock out that Tiger tank...


Define "Realism"
Most gamers seem to like it - I mean, heaven forbid you paint the soldier's straps the wrong colour on a Napoleanic army. What if, in your ancients game, cavalry moved 6" and infantry moved 12"?  Or what if you brought Waffen SS to battle riding in bright turquoise halftracks?  What if, in your game, bolt-action sniper rifles fired faster than a MG42?

Even sci fi and fastasy (the realm of the purely imaginary) have expectations of realism, especially if they come from a specific genre of franchise.  Imagine if you fielded purple Ultramarines or yellow and pink Blood Angels? That would raise eyebrows.  What about a laser pistol that shoots 48" when a laser rifle shoots only 6"?  Should that laser pistol able to 1-shot a Baneblade supertank?  You'd expect a goblin in a loincloth to be squishier than an armoured troll, right?  Interestingly, sci fi seems to follow historic trends i.e. Star Trek reminds me of "age of sail", Star Wars of "WW2 naval/aerial dogfights in space", Aliens has a "Vietnam" vibe.  Warhammer 40K is space medieval fantasy.

If we don't care about realism, why not use a $2 pack of plastic army men and shoot rubber bands and roll marbles at them like when we were kids?   So obviously gamers do like realism to some degree, when it suits them.  So what is "too much realism" and what is "not enough?"

I understand why people say "complex games = not fun." Heck, I'm one of them myself.


But why do people say "realistic games = not fun." Why is this? Is realism less "fun?"


"Realism" is not a synonym for "Complexity"
It seems like people (and many game designers) are confusing "complexity" with "realism."

I'd define realism as"reasonably plausible" for the period being gamed. I'd expect a realistic game to give a "feel" for the era. Tabletop gamers could use historical tactics with a expectation they'd get reasonably similar results.  I would NOT define "realism" as "replaying every last detail and action in a battle."  That is "complexity."

Fun AND Realistic?
For me, a good set of rules can accurately reflect a "real battle" in a casual, playable way. Without counting every rivet on the battleship or every round fired by the platoon sergeant's M16. A game can be quite abstract and still be realistic. The process can be simple and still give accurate results and a historical "feel."

Narrative & Realism in Gaming
For me, gaming is often "telling a story" - sometimes you rewrite history, sometimes you follow it, sometimes (like sci fi and fantasy) you make it up. But sci fi/fantasy aside, you need a set of rules that can plausibly represent the period. If your modern rules make it more worthwhile to charge into melee combat as shooting is ineffective, then perhaps the ruleset you have is not "realistic" enough. If  you WANT melee combat every turn, perhaps you are playing the wrong period?  That's why it's classed as a historical wargame. People want historically accurate miniatures and terrain, so why not "historical" or "realistic" rules?


Realism = Difference
I mean, we know they aren't real soldiers, that's not a real battle, they're not actually moving.  I'm not kidding myself that I'm a real general, though I should be able to use historical tactics. I'm not trying to "learn history" by playing, though I might anyway (I prefer to read books instead). It is a game, I'm here to have fun, and push toys around making pew-pew noises.  But if I've painted up a bunch panzergrenadiers, I'd expect to play a game "felt" like WW2, not a medieval skirmish game. At the very least, there'd be more shooting than melee!   If I wanted to play a medieval skirmish game, I'd grab out my medieval miniatures.


*This has absolutely no relevance to my post but I was chuckling over it as I wrote it.
Warning: "bleeped" out swearing

What I WOULD like are simple, fun rules that offer a different gameplay experience, that attempts to reflect the period it models. I don't play big battle Napoleanic, but I'd expect to see columns and squares etc, troops moving in formation and firing in volleys.  If I play moderns, I'd expect to see an emphasis on fire-and-maneuver and "bounding."

Every game is the author's interpretation. Every game requires trade-offs in "realism."  The rule designer chooses what is important and compromises elsewhere. The results of "capturing the flavour of the period" may differ. That's fine with me.  Different is good - it allows me choice of different flavours. Viva la difference!

Realism is not the "opposite" simple and fun rules.  Realism is the "opposite"of unrealistic, boring and generic rules. In a WW2 game, would you expect a squad of troops to be able to successfully charge across the open to melee a MG42 machine gun nest?  A realistic game would see them likely to be badly mauled.  In an unrealistic game they might teleport to the MG nest in their turn unscathed.

In a realistic modern game, if troops stand in the open, they can expect to be shot at.  In an unrealistic game, troops could halt at 25" from their foes and be totally immune from gunfire as all the attack dice magically dissipate at 24."

Both these situations have nothing to do with the complexity of the rules.

I know some say they like more realism, some like less. But are they voting for less realism or less complexity. Because they aren't the same thing. No one set of rules can be all things to all people. But that's what we seem to be getting - generic rulesets designed to sell miniatures, that cover from ancients to sci fi.

This seems to be the common "definition"

This is my "definition"

Challenging does not mean Complex
Chess is challenging, but it is not complex.  In the rush to "simplify" games designers are removing much of the challenge.  They remove the historical challenges in order to make the game more "universal" to fit more eras and be more easily "accessible."  You don't have to learn proper WW2 tactics anymore - you can just use what worked for you in Warhammer 40K! It does make games easier to learn and it does make the "learning curve" very gentle, but in catering to the lowest common denominator, it makes the game "samey" and shallow.

It's like removing the unique chess moves to make it play the same as checkers. Yes, it's easy for checker players to convert to your "new game" ...but you've lost everything that made chess unique and interesting to play.

Maybe it's all a question of terminology.
I say "I want my game to be realistic" and people hear "I'm bean counter who likes complicated games"  and respond "It's only a game - steady on, old chap!"

I say "I'd like my games from different periods to play differently"  and people say "Fair enough - we don't like boring generic rules either."

I'll probably spot a contradiction in my argument somewhere or realized I missed a point I needed to make, but I think I've rambled/ranted enough.

Over to the audience....

(I'm be out in the back shed touching up paint on a miniature from where a marble damaged it)
Posted by evilleMonkeigh at 17:26