That said, I loved the videogame STALKER.  Mercenaries and adventurers ("Stalkers") in NBC suits toting Kalashnikovs hunting through the "Forbidden Zone" of Chernobyl, clashing with paramilitary groups, mutant wildlife, and other bands of stalkers seemed like classic gaming material in the spirit of Necromunda.

The setting is primarily post-apoc UK but can be set anywhere from Europe to Alaska...

Shiny
It uses examples well, but mixes it in with a conversational style which I'm personally not a fan of.  A reasonable amount of colour art and pictures of minis in action that did well to set the scene.  A clear index showing you where to find what. Printable cards and counters, but would have liked a quick reference sheet (I'm sure there's one on a website somewhere, but it couldn't hurt to include it)  About 28 page of core rules and ~50 on campaign-related material.  Solid for an amateur effort, but if it's going to be a serious player with its own mini line etc it needs to improve.

Stats
Gang members have a class, a skill level, talents (aka special abilities), toughness, and speed.  Warband reference cards also include total 'to hit' and parry modifiers for easy reference in shooting and melee.

Activation
Each player alternates acting with individual minis in his gang.  Each time you activate a mini it may take two actions (leaders can usually make three).  Actions include move-aim-shoot-hide-melee and overwatch* where they can interrupt enemy turns. (*As usual, they name is something different like "watching and waiting" to be a special.  Tough. It's overwatch.  The only thing different from common-or-garden variety overwatch is that overwatch fire gets a +1 bonus which is unusual (there's a reason it's rare) and each turn on overwatch adds until you have up to +3... sounds like a great reason to hide and camp if you ask me, as +3 on 2D6 is quite a major boost, compared to +3 on d10 for example)

Players also have cards from the Events deck they can play.   Leaders can pass a 2d6 roll to give an extra action to any allies in command range (6-12"). Medics can attempt to revive downed allies with a special heal action.

The setting is pleasantly open ended and allows you to set your games anywhere - maybe a post apoc version of your home town?
Movement & Terrain
The usual things slow you up - obstacles like fences, ladders, and bogs - what we call "difficult terrain" but this a -1" to -4" penalty depending on the terrain type, rather than the usual halving of total movement.  You get bonuses if in cover from +1 to +3. Again, since we're using 2d6, a +3 is quite significant.   You can do the normal climbing, jumping etc usual in this sort of game. The only thing of interest was the rule for jumping down onto opponents from above.  Models have the usual 1" zone of control.

Shooting
Overwatch characters have a 180d facing, meaning they can be outflanked.  Weapons have a "to hit" number over 3 range bands.  Any model hit then rolls below a "Save" (usually 10-12 on 2d6)- which is affected by the degree of success of the shot (i.e. if you needed 6+ to hit, and rolled 8, that'd be -2 to the saving roll), and power of the weapon itself - a shotgun has a -3 save.

There's a good generic range of weapons which should cover your post-apoc needs (includes crossbows, blunderbusses, etc), each with a points cost.  There are a few sensible special rules, such as LMGs needing 2 actions to fire the first time (set up bipod etc) and only 1 action thereafter.

The weapon ranges are really short and weird. I'm talking 18" for assault rifles and sniper rifles.  LMGs(!) and SMGs share the same 12" range.....   ....with crossbows and pistols. A crossbow shooting 2/3rds the range of a sniper rifle?  It just seems... off.  To think - I made fun of Bolt Action's 24" rifle ranges.  I think they attempted to balance weapons by restricting range rather than by other methods.

Melee
Players roll 2d6; the attacker adds his weapon modifier, and the defender uses their parry modifier.  The attacking player gets +1.  If the attacker wins he scores a hit and the defender rolls to save. If the defender wins he can opt to disengage; but if he stays engaged he can roll again and try to "counter attack" with a +1.  However if the defender is yet to activate, it might be better to disengage and hose the attacker point blank with gunfire during his activation.  Dual wielding allows you to attack individually or combine the weapons bonuses into a single attack.

There's a few melee choices, like holding enemies so allies can hit them more easily, pushing them (off a high object, one presumes)

Again, a good selection of weapons: from combat knives to scimitars to flails to lead pipes (which somehow work differently to a club).  Each has a separate attack and parry modifier as well as a save modifier (i.e. relative lethality).  However the choices again are... odd. I mean, scimitars are that common in the apocalypse?

However.... whilst melee is interesting I think it is a bit exploitable.  If riot shields are +5 and you can dual wield them.... Okaaaay.  It'd give you +4 to gunfire in the open too. That's better than hard cover.  Dual wielded spears? Hmm?

Damage
Minis who fail their rolls are knocked out; each turn they roll 2d6, recovering on a 12 and dying on a 2.  They can be revived more expediently by medics or stim packs.   Downed minis can also be rather easily finished off. At a pinch, there are rules for dragging downed allies to safety.

I found some of the weapons stats...   ...questionable....
Dogs
These act like gun-less gang members, who must pass an obedience (skill) test to do anything.  I quite like the idea of dogs dragging wounded to safety, attacking enemies and running off with loot, so +1 for this rule idea.  They can also be assigned to Guard specific locations/people/objects and interdict enemies who approach them.

Event Cards
You can keep 3 face down on the table at once, then turn them over to activate them; and also swap them out with cards in your hand.  They do various flavourful things like "booby trap" enemies moving in confined spaces, re-roll dice, make enemies automatically miss, throw back grenades, taunt foes, etc.

Loot
Collecting loot and returning it to their start zone (and not dying) is the main aim of the game.  Loot is worth varying points amounts and there can be 3,5 or 7 loot tokens in the game.   You also collect points by killing foes (looting their corpses gives a bonus)

The game ends when all loot is collected or one gang returns all its minis to the start zone and declares it is retreating, in which case it forfeits any loot remaining. There are also capture and occupy missions, and the traditional deathmatch. 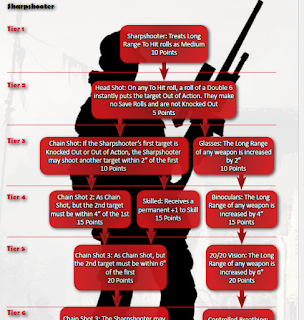 The tree for levelling up classes had a strong videogame vibe, but is a refreshing change of pace from the usual upgrade systems.

Campaigns
There is a table to roll on for casualties taken in the battle where they can recover, die or acquire permanent injuries.   You can hire new gang members and buy standard weapons and gear.
There are also ~30 rare items like camo, rope (rare, really?)  gasmasks, bulletproof vests and the like. Only d6 random rare items will be available.  Campaigns can be fought over a campaign map or played in narrative fashion.

Building warbands.  You can upgrade troops to Leader (max 1) or medic, or roll on talent tree. Basically, you buy a grunt, then add weapons and general traits, then pick a class and any special talents.  I like how you can start a campaign with a bit of flavour rather than waiting 2-3 games before minis start to get "interesting" skills and abilities.

Skills are applied in "trees" i.e. you need to have a skill in the previous tier to use a skill.  To "rank up" a complete tier you need to have all skills in that tier.  Classes are leader, medic, sharpshooter, assault, heavy, and scrapper. Dogs have their own advancement tree.  Higher tier skills may allow access to higher tier equipment.

Recommended?  It's not bad, but unfortunate in that I directly compare it gameplay-wise to the excellent and free Infinity quickstart rules; I'm unlikely to give it much game time.  Pretty generic and I'm not sure 2D6 are the best choice given the heavy use of modifiers.  The use of weapons bonuses (rather than firer skill) determining missile/melee "to hit" numbers is a little odd, as is the "camping bonus" for extended periods of overwatch. Weapon ranges are both short and rather unusual (i.e. SMGs, crossbows and LMGs with same 12" range... and snipers maxing out at 18" - that's Warmachine short).  Also, sometimes the 2d6 rolls have to be under a target number and sometimes over, which is a little inconsistent.  That said it is only 5 pounds ($10) as a PDF, and does a creditable job of channelling "post apoc Necromunda." The setting is good and the campaign potential is there....  ....but the rules have a strong "beta test" vibe. I'm going to say no for now, but maybe in the future.
Posted by evilleMonkeigh at 04:43