After looking over magic systems, I'm going to keep with my original idea:

1. Mana is a stat - only for mages - (which can be resisted by Will amongst non-mage troops)

2. Like all other stats, you roll under the TN to succeed on D10.
I.e. A mage with a Mana of 6 needs a 6 or less to succeed  to cast an ordinary spell.

3. The spell difficulty modifies this TN. (-2 very difficult, -1 difficult, +1 easy, +2 very easy)
If the mage casts a very difficult spell he would need a 4 or less, rather than a 6 or less.

4. If the spell fails, you are out of Mana and receive a "out of mana" token.

5. You can regain mana by forfeiting 2 actions next turn. 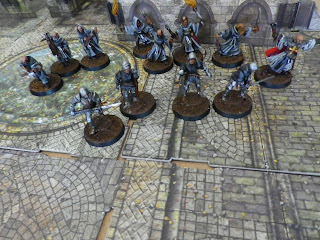 My own personal "game world" is a 100-Years-War with magic.

Optional Thoughts:
You can instantly regain mana by sacrificing a wound/losing stamina (or maybe merely rolling against the Physique stat to see if you do)

Spell limits.  Extra spells are (-1 or -2) to cast/maintain; you can cast or maintain 2 spells during any given turn.  I.e. if you are maintaining "magic armour" from last turn then you can only cast one other spell this turn.

Maintenance.  You still must make a "Mana" roll to see if you successfully maintain a spell from last turn/run out of mana, but simply maintaining a spell (as opposed to casting a new one) is a free action and does not count against your action limit.

Reactions.  Single-action spells can be cast in reaction, with an appropriate modifier (-2?) to show the mage is rushed in his casting.  Attempts to "dispel" other magic has no such penalty.

Prepared Spells.  A spell can be "prepared" (taking an extra action) which then doubles its range or AoE or effectiveness/damage.  This will only be once the other stuff is sorted. 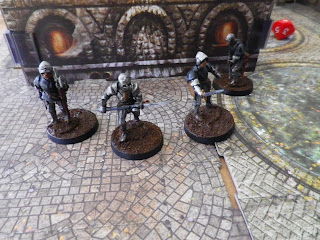 The knights of "Grey Order" have taken vows of poverty, and to defend Christendom against witches, demons and the unquiet dead. Plate armour is quite effective at blocking vampire fangs...
Whilst not the "best" method (I'd have preferred a resource "pool" of magic tokens a la Warmachine or Savage Worlds) I've gone with it for a few reasons:
1. Ease of balancing.  There's two variables - the spell itself, and the modifier to cast it.  This makes it easy to balance "overpowered" or "weak" spells: I either reduce/increase the difficulty modifier, or (at last resort) alter the spell itself.   Having a separate "casting cost" would add a third variable and make it much harder to work out the "right" thing to do.
"Larry uses his mage to cast fireballs EVERY action, and ignores all the other spells."
"OK, then let's make it a -2 modifier to cast them"
"Now no-one uses fireball, but are spamming "Mage Armour"
"Ok, let's make fireball a bit easier - change it to -1 and also give a -1 to mage armour and see if people start using other spells"

2. Consistency. Using the "fail a roll, get a token to show you've run out" mechanic keeps it consistent with other mechanics like Stamina 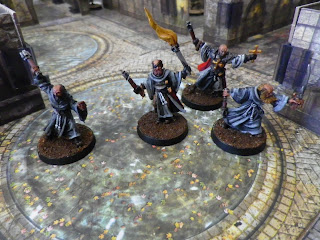 The Brothers of the Order wield both a mace (so they may not spill the blood of fellow man) and a silver sword (for battling the forces of Darkness).  Torches are handy, as many species of undead are surprisingly flammable.
I am starting to ready supernatural forces for Middlehiem; demons, a pack of ghouls, a pair of vampires, werewolves and some gargoyles are all undercoated and sitting on my paint table. 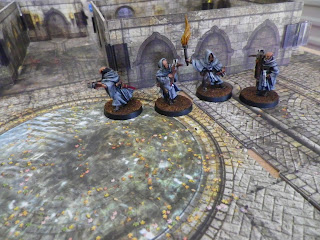 Crossbows, with blessed silver-tipped (or explosive) bolts, are also a sensible weapon

I've been playing with my pulp spin-off rules, but I'm ready to return to Middlehiem.  Hopefully I can get some magic playtests posted up before the holidays end.  (When you have a 12-week-old, nothing is guaranteed)
Posted by evilleMonkeigh at 17:08