It's holidays, and I am dutifully putting shelves in a cupboard for my beloved wife.... 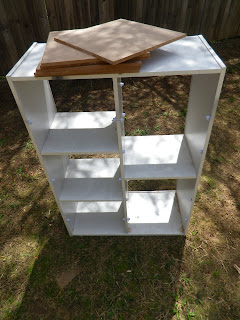 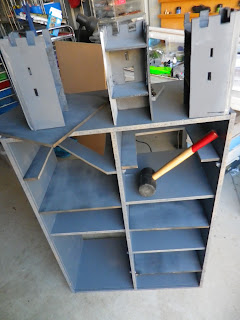 It will form the basis of some multi-storey terrain, that I can store the terrain in.  The cupboard will form the "base unit". I will put balconies etc off the outside, and more walkways (like the top floor) with ladders etc connecting the floors.  I can use foamboard (like the castles on top) for lighter attachments; the wooden bookshelves will just form the core support.  And in the end, I can pack away my minis...   ...inside the terrain?

It will serve as a castle dungeon, a hollow mountain, an Umbrella Corp/MJ12 corporation secret base, an undersea base, a vampire tomb, a multistorey modern apartment block...   ...I have plenty of ideas.

I'm not sure how to make doors as I'm not terribly handy; maybe some sort of Dremel cutting blade to cut out small doors to connect the two "sides" of the bookcase?

Obviously only early stages, but you can see where it is heading. 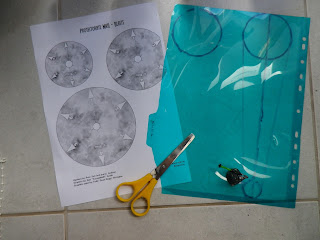 I've decided to standardize templates to 3" and 6"; with my own homebrew spray template which works the same for 6" and 12" range versions.

In other news, I am making some templates for Middlehiem and Modern Pulp (working title); two rulesets that are increasingly sharing mechanisms.  Originally Middleheim was a mix of modified Bolt Action activation, Warmachine (but d10 not 2d6 + stat), with DBA/SoBH damage resolution.

However the game (in play) had a pleasing SoBH/Infinity vibe and I've decided to emphasize this and try making an engine for modern pulp games.  Annoyingly, this off-the-cuff creation (I think I wrote it in an hour) played much better than Middlehiem, so I'm now porting the better ideas back to Middleheim, sans the Infinity-esque unlimited reactions.

I like both rulesets (especially Infinity), but regard them both as flawed:

Infinity has excellent decisions and player involvement, but a ridiculous amount of (complex) special rules, but it's excellent for shooting combat, though it suffers from cheerleading (models who stand around doing nothing);  SoBH has an excellent risk-v-reward activation and momentum shifts, but is  overly simplistic/bland with limited customisation; whilst ironically suffering from excessive special rules and a shortsighted marriage to d6. In contrast to Infinity, it is weakest in shooting combat.


Modern Pulp uses "roll under d10 TN" and unlimited reactions similar to Infinity, whilst using a risk vs reward activation like SoBH; eliminating the cheerleading from Infinity whilst allowing the momentum (who is active - a major advantage) to switch fluidly within the turn, making it a bit more dynamic.

So far I'm liking Modern Pulp better than both games.  I'll do a Middleheim test soon once I fully convert in the mechanics to suit medieval/fantasy. If folk are interested, I'll start doing up illustrated examples and work on making the rules more coherent as I think I'm now content with the core concepts (after completely overhauling activation twice, and replacing the complete mechanics once).
Posted by evilleMonkeigh at 01:59