Since I picked this up at half price I thought I'd add it to my collection of Savage Worlds reviews.

As usual, this focusses on the ability to use the Companion for skirmish wargaming. If you want an RPG-centric review, this is not the place to find it.  404: Return to Google and try again!

The Horror Companion seems pretty squarely aimed at the vampire-werewolf-monster hunter trope.  There isn't much alien horror to be found.  You'll see a few words repeated in this review - "generic"  "typical" "minimal."  There's enough to do what needs to be done, without a lot of trimmings or originality.

I'm ignoring the gamemaster's section as it's more generic advice anyway and certainly is of no interest from a skirmish gaming viewpoint. 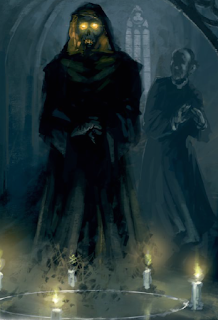 The dozen or so weapons (stakes, repeating crossbows, holy water, silver/UV bullets & grenades) are again the "essentials" and don't break any new ground.  Equipment is again limited in scope and pretty generic - ghost hunting goggles, motion trackers, mirrors, UV lights, crucifixes.  Again, the essentials.  In all cases the choices are sensible but minimalist.  Nothing new is added.

There is about 30 pieces of unique equipment (evil hockey masks, voodoo dolls, warding rings, vampire coffins) some useful, some less so.

Magic is more serious.  Failing magic rolls will cause Sanity loss as well as the usual backlash.   Any time an individual suffers a gruesome death there is an AoE blood spray template - which causes a morale test to any splattered in gore - and renders the area slippery for the rest of the game.  A nice touch.  Furthermore, particular dates (All Hallow's Eve, full moon etc) can enhance the powers of various creatures as you would expect.  Magic is not as pervasive as in fantasy, but you can perform extended rituals to make it more powerful (extend range, duration, effects). Failing a ritual is usually rather dangerous.  (I.e. from fatigue loss to a portal from the netherworld sucking everyone in, or energy frying everyone involved)

Sanity (2+ Spirit) is a resource that can be lost each time you fail a Fear check.  If it reaches 2 or less, the character must pick a Minor Habit until it recovers to 3+.  Once it reaches 0 the character becomes deranged/psychotic.  Psychosis include vacant staring, flashbacks, the shakes, addictions, paranoia...   ....at worst, becoming a maniacal villain under GM control.   This is a useful addition.

There is fortune telling section which has little application to wargaming and is pretty vague and GM-centric anyway.

Wards require a spirit roll at -4 to break (i.e. werewolf warded by silver/vampire vs crucifix) and work automatically; bindings include a pentragram/circular trap but the rules tend to be more long-term RPG plot-based affairs and less useful for skirmish wargames.

There are only about a dozen new spells which tend to revolve around summoning, banishing, blocking or binding undead/spirits.  To be honest, you could easily get by with the usual generic Savage Worlds spells as this really doesn't add a lot to the game.

There are about 70 pages of critters and it makes up the bulk of the book.  Finally some originality is shown - with entries like aswangs (Philippino vampires), ama-no-jaku, black coachmen, malevolent trees, creeping hands, flying heads, haunted cars and portraits, rug fiends (!), evil jack in the boxes, seaweed fiends, evil rock musicians, ventriloquist dummies, weresharks - as well as all the horror "staples."   The downside - all the horror "staples" are covered in the Explorer's Edition, so unless you really want weird stuff like rug fiends, the Horror Companion doesn't really do much.

TL:DR
Characters, edges, abilities tend to be the bare minimum for generic horror adventuring, only the most common tropes.  Magic didn't add much of any import.  The bestiary was extensive but....

...the fact the base Savage Worlds Explorer's addition has a strong pulp focus means the Horror Companion (which covers similar territory) adds very little to the base game.  The expanded Sanity table and the extended bestiary would be the prime reason to get this.  But....   ....the base Explorer's Edition covers all your basic generic horror critters anyway, and even has simple Sanity rules.     In short - if you already have the excellent base Savage World's Explorer's edition (which you should) there is no real reason to own the Horror Companion.

Recommended:  No.  On special, perhaps. Otherwise, no - it simply doesn't add anything particularly worthwhile to the excellent Explorer's Edition base rules to be worth paying for. (Which is even more ironic, as the Explorer's Edition is a nice, full colour softcover book that costs the same as the Horror PDF...)
Posted by evilleMonkeigh at 16:36