The special rules issue is one I've visited before, but emerged again due to two things - trying to make a generic special rules list for my homebrew Middlehiem/Pulp rules, and trying to relearn (and review) Infinity the Game V3.

What do special rules and abilities do?
They give factions and units flavour.  They cover exceptions to rules - they do things that normal rules (and stats) cannot describe otherwise.  By their very nature, they also complicate the game due to the fact they are deviating from the norm.

When should something be a stat, and when should it be a special rule?
Stats give granuality and describe traits possessed by all (or nearly all) units.    They are a rule shared by everyone.  Whereas special abilities are not the norm. They describe and detail unique rule exceptions in a way stats cannot.  That's why they are "special."

Whack it again, the horse is still moving
Lately there has been a push to remove/reduce stats and replace them with special rules in the quest for simplicity. Adding extra rules is not simplicity. When you add in more rules, it is complication.

Let's take the near universal 6" move.  Once upon a time there was a Movement stat.  It had a number next to it which showed how many inches you could move.  This wasn't a complicated rule.  No one I am aware of, ever, had trouble understanding that Move 5" mean to Move 5", or that Move 6" meant Move 6".  In fact, the stat itself was pretty self-explanatory - even to people with zero background in wargames or gaming in general.

However this was deemed to complex. It was replaced with a everyone moves 6" rule.  Now some enlightened souls realised not every man, beast or alien moves exactly the same.  So they added in Special Rules (also known as extra rules or extra complication) to deal with this newly created problem.  So we have Fleet Footed guys who can add 1d6" to their movement, and a Mounted special rule allowing horses (and every other cavalry beast) to move 12".  Then we have Slow & Steady troops who cannot ever do a double-move Sprint.   We've added 3-4 extra rules and yet still have less granularity and differentiation than our single Move stat.  We've gone backwards.

Okay, that's out of the way.  On to the examples.  First a pop quiz. Subject: Infinity the Game. 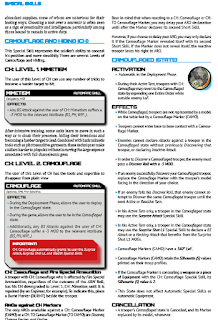 Q: How much of this page is about Infinity's Camo Rules?
(a) a paragraph or one of those text boxes
(b) one column (half the page)
(c) all of it
(d) keep reading, champ, this is page 1 of 4!

If you answered (d) you can expect what is coming.....


Infinity the Game = BAD
They frequently have 3 or more versions of the same rule; i.e  you have Camo: Mimetism, Camo, and Thermoptic Camo.  Not only that, the rules interact with each other in complex ways.
Those 3 levels of camo? Well exactly what they do depends on if your enemy has Multispectral Visor in level 1, level 2, or level 3. (I'm not joking).  But is it actually Camo,  or simply an Optical Disruption Device?

Most special abilities and equipment have multiple levels.  If you want to Impersonate an enemy, is it Level 1, Level 2... or Impersonation+, a hybrid of both? Are you a Markman Level 1, 2 or X class?  Airborne Deployment (aka Deepstriking for 40K reference) comes in no less than 5(!) different versions.  Actually, six. Oops. I forgot Level X: Tactical Jump.

If you don't think this is at least faintly ridiculous, please leave the room now. 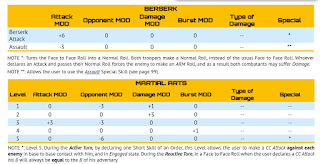 Special Rules are Special
They exist to give armies, units and factions flavour. If everyone has it, it becomes flavourless.  They aren't special anymore.  If everything had curry in it, eating Indian wouldn't be interesting - it'd be the norm.

If you cannot resist giving half the units in every single faction Camo, then it's a little wonder you need to make 3 different versions of it to make it "special" for a faction.  Show some restraint!

This, for me shows a RPG-centric game dev; to have a very specific object or creation in mind, reproduce it faithfully in game world, regardless of complication to gameplay.  It puts the game universe ahead of good gameplay. (Actually, for years I reckon Infinity devs fell into this category - they've confirmed it by Kickstarting an Infinity RPG - though I wonder what the point is... though heck, it'd have be simpler to play than the skirmish game, right?)

After that sweeping generalization, it is ironic that my "good" example is, in fact, a RPG

Savage Worlds = GOOD
This game classifies powers by their in-game effect.  I.e., do the powers act the same way in the end?  The actual working of the power are dismissed as "trappings" that add fluff but are largely irrelevant to gameplay.  In short, they can easily condense their special rules to manageable levels.

A blast of fire/ice/lightning has the same effect - i.e. roll to damage those inside a spray template, identical bar some perhaps some minor optional trappings.  Heck, the flame blast can come from a flamethrower or a battlemage.  Those on the receiving end have the same roll to save etc.  Sweet, we can use the same rule - we've cut down on the extra rules!  A WW2 medic, a Alien automedkit, and a healer mage all "heal" targets by performing a roll vs the target's toughness. Same rule! A model can "regenerate" and recover from being downed - a Terminator, a vampire and Marvels' Wolverine can all share the same rule - they have very different "trappings" and methods how they resurrect, but the end result is the same.

Instead of having 3 versions of the same rule; they have one rule that can be used for 3 different situations.

Furthermore, unlike Infinity the interaction between rules is minimal.  If anything, interacting/conflicting abilities tend to simply cancel each other out rather than adding complicated extra effects.   Special rules can (and should) be described in a paragraph, not a page.

Savage Worlds keeps a relatively short, restrained yet comprehensive list of magic skills and abilities that nonetheless works for a wide range of genres (fantasy, pulp, sci fi) - so well that I have been unimpressed with the supplements who have struggled to add significantly to the base game.

Equipment and innate abilities can share rules.  If a solider has Night Vision Goggles and a Werewolf has Night Vision - great, it's the same thing.  They can share the same rule.  Advanced Senses (hearing/smell/etc) vs Advanced Robotic Sensors? Ditto.   Vampires might possess a natural form of Thermal Imaging.


A Summary:  Do's and Don'ts
Special Rules are special. Keep them that way.  Use them too often and they are the norm.
If it's the norm, it probably should be a stat.
Don't have 3+ versions of the same special rule.
Keep the interactions between rules to a minimum. Unique interactions multiplies the rules exceptions.
Classify and condense special rules by game effect, not by "trappings" aka game universe fluff.
Can you describe the special rule in a paragraph? Better yet, a sentence.
Equipment and innate abilities can share rules (animal night vision = night vision goggles)
Posted by evilleMonkeigh at 00:46